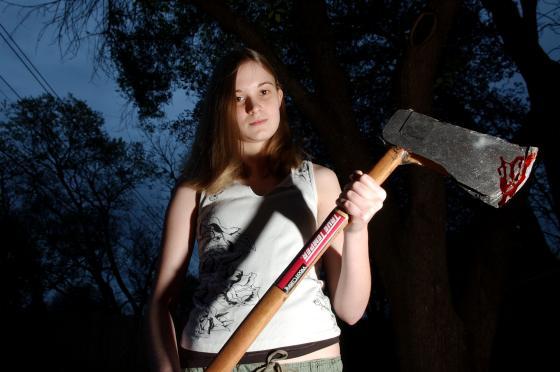 You know that old dismissive adage about opinions and assholes? Well as a reviewer of horror films this aphorism has a definite duality for me. Most introspectively, I am just another asshole with both an opinion and an anus and often one is issued forth from the other. The less obvious application of the saying pertains specifically to our beloved genre. If you’ll allow me to paraphrase, Zombie movies are like assholes, everybody’s got one. I mean almost literally, it seems like every fledgling horror film maker’s first movie is a zombie jaunt and by and large these films are unwatchable beyond the 1 hour mark. My first thought when I heard about the documentary “Zombie Girl” was, ‘great another day in the life mocku about a simple zombie teen trying to make it through in a living person’s world, yawwwn’. Then when I heard it was an actual doc. about a 12 year old girl who makes a no-budget zombie film, the opinions and assholes thing popped into mind instantly and I yawned again.

“Zombie Girl” follows it’s titular young lady (real name, Emily Hagins) as she embarks on the process of shooting a feature length living dead film using only her instincts, her parents modest purse strings and kids from around her neighborhood in Ausitn, TX. Emily is a cinephile whose celluloid crush began in earnest when she and her mother, Megan discovered a larping love for “The Fellowship of the Ring”. Emily was so taken with Peter Jackson’s middle Earth epic that she wrote to the big Kiwi seeking advice on how to become a filmmaker. Jackson read and responded by putting Emily in touch with “Ain’t It Cool News” chic-maven Harry Knowles who in turn introduced Emily to all-manner of filmmakers working in the Austin area. Around the age of 10 Emily saw her first horror movie “Undead” at Harry’s local Butt-Numb –A-Thon film festival and her genre passions shifted dramatically.

2 years later, armed with some knowledge gleaned from her teachers and a script that had been in the works since she was 10, young Ms. Hagins sets about casting and rehearsing her inaugural film statement, “Pathogen”. The pre-production process zips along with the enthusiasm of youth, both cast and crew, buoying everyone’s spirits. The start of shooting provides another bump in morale but as school demands pile up and kids’ availability wanes Emily and her mom experience the mounting pressures of no-budget filmmaking. Megan worries about Emily’s work ethic and the young director succumbs to some of the diminished focus we all experienced during our tween years.

Right from the start I should say flatly that “Zombie Girl” is too long. Emily Hagins’ journey could and should have been told in about an hour. The pitfalls of indie production are recognizable after the first spate of problems, so making each new set of dilemmas a story point only serves to create pockets of sameness and stagnation that place drag on the forward momentum.

On the other hand…Emily Hagins is a kid with fervor for film and the charmingly scattershot mind of a whipsmart middle-schooler. This makes her likeable, goofy, wiser than many of the adults give her credit for and a worthy person to base a film around. Her charm and self-awareness coupled with her typical tween flightiness keeps a friendly tension brewing within the narrative. This tension places the viewer in the position of alternately lauding Emily’s maturity and wondering if she might have an approach that is so casual that the film will never come to fruition.

The other aspect of the film that makes it compelling are the interactions between Emily and her parents. The Hagins’ are artists and their willingness to place time, faith and energy behind Emily’s pursuits should serve as a primer for parents about to step onto the near end of the long bridge to adolescence with their kid. This is where filmmakers Justin Johnson and Aaron Marshall really focused their time and it is what makes this a story worth telling. It is not simply a yarn about a quirky kid who wants to make a movie, but the tale of a family who understands that what their child needs is love and well boundaried support. Johnson and Marshall never sensationalize Megan’s frustrations, which are myriad at times, but rather portray with honesty how the elder Hagins’ handle (bad and good) the delicate process of letting go and letting their relationship with their daughter evolve.

Did Emily Hagins’ zombie film become a festival darling by displaying skill and passion well beyond her 12 years? It doesn’t matter because her family helped her to actualize a dream and she has continued her cinematic aspirations since “Pathogen”’s completion. As her dad and the filmmakers are quick to point out, even if Emily abandons those aspirations by her 18th birthday she has been given gifts of experience, support and love that will endure. So, is “Zombie Girl” worth your time? I can’t be sure but the good news is that with this film you are getting more than just another indie-filmmaker with a shoddy zombie retread to peddle. Then again I am just a reviewer with a bunch of asshole opinions to offer, so who am I to judge?

Aileen Wuornos: The Life and Death of a Serial Killer