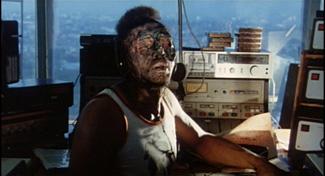 WOW... what the hell did I just watch? I ventured into Zombi 3 knowing full well how "bad" it's purported to be. I knew about the directorial problems, bad acting, plot inconsistencies and everything else. But dear horror fan, nothing... and I mean NOTHING could have possibly prepared me for the movie that I just saw. In fact, as the minutes tick by it's becoming harder and harder for me to fathom that what I just saw was real.

We start out by watching some sort of medical transport gone hilariously awry. While preparing to board a helicopter with some obviously hazardous materials a medical team is ambushed by some men with guns. A shootout ensues and the one surviving member of the ambush team makes off with the materials while he's chased by a helicopter. There is a man sitting in the helicopter with a gun which he is apparently pretending to fire (since there are no actual muzzle flashes or bullets to speak of). This absolutely ridiculous scene starts the film with the same badly directed action and confusing plot that seem to mar the rest of the picture. Come to think of it, the reason for the attack on the scientists is never explained or even mentioned again.

This scene ends with the aforementioned fake gunner somehow catching the suspect with one of his imaginary bullets. The blast causes the man to drop the case and break the contents, spurring an ominous green light and ample smoke to come from inside... surely signaling us that something is about to go really, really bad.

In addition to causing a horrible disease that turns the carrier into a bloodthirsty zombie, the contagion also seems to cause spontaneous smoke to arise from EVERYWHERE. I have never, in all my life and times seen such a gratuitous use of a smoke machine. Case in point; at the end when two of the characters are flying away in a helicopter... there's smoke! I propose a drinking game where you take a shot every time you see aimless smoke drift through a scene in "Zombi 3"... I guarantee you wouldn't make it 30 minutes in.

I refuse to bore you with any more details of the plot other than to say this, that the rest of the film plays out like a strange mish-mash of "Day of the Dead" and "Return of the Living Dead"... aka there's a conflict between the military and scientists and the disease is spread when the army men burn a contaminated body. Essentially, if you put both films in a blender, took a prompt crap into the appliance and then hit "frappe", you might get an approximation of what it's like to sit through this movie.

The problems this film had while shooting are well documented, but for posterity's sake let's go over them quickly here. Basically, Lucio Fulci set out with this film to make a sequel to his 1978 masterpiece "Zombi" (aka "Zombi 2" in Europe). Halfway through filming Fulci had to bow out due to health issues and allow Bruno Mattei (a friend of the writer's, and 2nd unit director) to finish the film. By Mattei's own estimations, only about 50 minutes of what Fulci shot actually ended up filling out the 96 minute run time. While most of the film looks uniform and has a similar style, some obviously tacked on gore shots appear to be done on different film stock altogether (if not video, these scenes seriously look awful).

There are so many continuity and logic errors here that spotting them becomes kind of fun after a while. Some zombies run while others shamble (the running zombies added by Mattei to create more of an action movie). There seems to be no specific way to kill the zombies, and I even think I caught one dying from a half-assed punch to the stomach. The characters are strangely underdeveloped, to a point where I don't think you learn a single piece of back-story about ANYONE that appears on screen. I can't even remember any of their names, not a good sign.

The fight scenes are handled with as much grace as the plot development, although to be fair there are some hilariously campy moments, like when the 2 soldiers take out a whole room of bio-control agents without any weapons, despite the fact that every one of their foes is armed. The whole affair is made yet more ridiculous by what has to be the worst dubbing I have ever had the displeasure of sitting through. In many scenes (many, many scenes) it appears as if whoever dubbed the actors wasn't even concerned with whether or not they were saying THE SAME WORDS. Classic, just classic.

Try as I might, I can't help but sit here and think that it's impossible to truly describe the experience of watching "Zombi 3." Everything you have ever heard about it is true, and oh so much more. I can't remember the last time I watched a movie that was so fun and so painful to sit through all at the same time. I also can't remember the last time I saw a movie with a budget this big that was directed so ineptly. In fact, inept is just about the best word I can come up with to describe it, even if it is at times hilariously so.

Granted, Fulci's health problems probably affected the scenes he directed, and the rest of the film was helmed by what I can only guess is the worst director in the history of celluloid. But taking into account the back-story here only takes away from the cold hard truth, that "Zombi 3" is a cinematic abortion of the highest order. I recommend you run out and see it immediately of course, if only because I want you to hate me, and love me, in the morning.