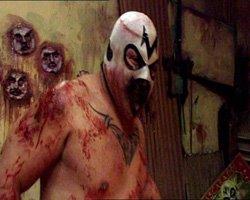 Sweet Dios, do I love a Lucha Libre movie.

And not in the hipster, Hot Topic, I saw Nacho Libre and then bought a t-shirt teenage dumb-fuck way, but in the honest-to-God I have watched 70s Santo movies with no subtitles that I bought at a Mexican hole-in-the-wall grocery store at 6 A.M. way. So yes, to answer what you’re thinking, I do think I am better.

So, when a copy of the cleverly titled WRESTLEMANIAC finally pile-drived it’s way into my DVD player, I was excited enough to have a semi. I mean, how can you hate a movie that combines both the luchador film and the slasher film? You can’t. And while it may not be a hundred percent successful as a “film”, it sure works as an entertaining “movie” (yes, there is a difference). At this point in my life, that’s all I really want anyway, so bueno for me.

After a pit-stop where character actor Irwin Keyes tells them to avoid the ghost town of La Sangre de Dios, they promptly go straight there, only to find out that it also happens to be the home of the most notorious luchador ever, El Mascarado, a genetically-modified, mucho lobotomized, very insane brute who, per the rules of Lucha Libre, rips the faces (or masks, if you will) off his opponents. “Played” by WWE “superstar” Rey Misterio, he lumbers his way from actor to actor, growling, ripping off faces and growling some more. He makes Kane in "See No Evil" look like Olivier.

Eventually we’re down to the “final girl” Dallas, played with a spicy, legs-spreading fervor by the uber-booty-ful Leyla Milani, who runs through the ghost town in her panties as much as possible.

While this could have been a typical stalk-and-slash — and for the most part it is — director Jesse Baget infuses enough gallows humor and sexploitative thrills into the thing that it plays as more of a comedy, or at least a parody of those conventions. But even more so, he lets his characters run loose and treats them as though they are in a bad horror movie, giving us no background, no reasonings and, even better, no reason to even like any of them.

It’s a pleasure when El Mascarado rips their faces off — and I think that’s what I enjoyed so much. "Wrestlemaniac" isn’t trying to be anything it’s not — it’s a crazy luchador killing assholes in the adult film industry for 75 minutes. No hidden subtext here, just South of the Border suplex-filled bloodenings. Ole’!