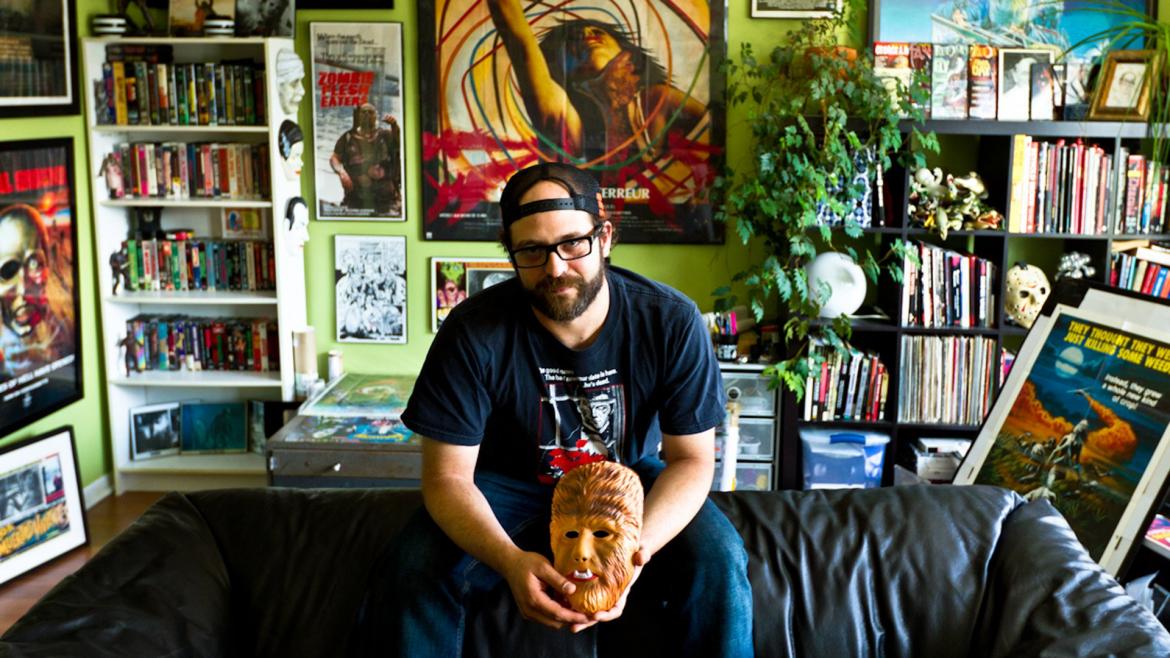 Tell people you’re into cooking or yoga and they don’t bat an eye. Tell them you’re into horror, however, and you’re liable to get a variation of “How can you watch that stuff?” complete with a slight scrunching of the face to further show disapproval at your hobby. It’s a question (and response) journalist and horror fan Tal Zimerman seems to know all too well and one he seeks to put to bed forever in the overly ambitious but genuinely affectionate documentary Why Horror?

For a two word question, Why Horror? proves to be quite an ordeal to answer. Directors Nicolas Kleiman and Rob Lindsay – the latter of whom also wrote the film – and Zimerman, who serves as host and subject, embark on a globetrotting journey spanning generations, exploring the biological and cultural sources of horror fandom. Along the way, they seek the expertise of everyone from horror filmmakers to psychologists to determine what it is that draws people to the macabre. Oh, and because apparently that isn’t enough to tackle in your 80 minute, partially-Kickstarter-funded documentary, Why Horror? also tracks the evolution of both horror cinema and fear.

Those grand aspirations are the film’s biggest failing. There’s too much going on for it to be resolved in a way that is truly satisfying. Zimerman, for example, is a likeable enough host who – with his stories of homemade makeup effects and nervous authority figures – is positioned as a stand-in for the “average” horror fan. However, his full personality is never given time to emerge, nor is he able to make this movie truly his. Instead, he’s placed in something of a “bobblehead” role once we start jetting around the world, nodding while others explain spooky culture in Mexico, Japan, etc.

Each of those subjects – Mexico and its gorgeous Day of the Dead celebrations and Japan, with its history of curses and vengeful ghosts – feels ripe for a documentary all their own. The same goes for the segments concerning the science behind horror. Whether it’s Zimerman watching horror flicks in an fMRI machine or measuring the ways he and his non-horror loving (but scene-stealing) mom biologically respond to fear, the fly-by treatment these investigations receive leaves much to be desired.

The over-ambition of Why Horror? is fueled by an undeniably giddy love of the genre. It’s presence is in every scene, palpable as Zimerman awkwardly tries to explain to John Carpenter which of his movies he likes best or when our host confidently assures his mom the scary part of the film they’re watching together is over. In truth, it’s not a surprise that Why Horror? proves to be too broad of a question, as its answers were always going to be as diverse as the fan base itself.

A Glitch in the Matrix