White: the Melody of the Curse (Movie Review) 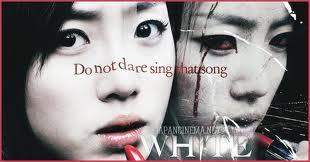 "White: The Melody Of The Curse" is a film that tries to blend K-Pop music and Asian horror. If that last sentence didn’t turn you off from the seeing White, I’m sorry to also have to tell you that it’s not a very good movie. It tries to take a serious look at the business of pop music while at the same time telling a convoluted story about a cursed song. In the end, unfortunately, it just comes out as a confused mess.

White centers on The Pink Dolls, a girl group that just can’t seem to succeed in the competitive, cutthroat world of Korean pop music. We see them in an early singing competition and to say their performance is painful to watch is a massive understatement. We also quickly see the dynamics of the group, and it’s obvious that three of the girls don’t care much for the oldest member of the Dolls, Eun Joo.

Despite The Pink Dolls’ apparent lack of talent, their management team sees promise in them. While they are moving into their new recording studio, one of the girls finds a box of old tapes including a video of another girl group performing the song “White.” Taking advantage of this find, The Pink Dolls make the song their own and it becomes a hit.

As they become more popular, however, each girl begins to scheme to become the lead singer/dancer/performer—or “main,” as they refer to this role in the film. Those who aren’t selected become increasingly resentful. Just as a girl is selected to be the “main,” however, she meets some cruel fate. In the end, only Eun Joo is left. She tries to solve the mystery while at the same time launching her solo career. Talk about multitasking!

The horror here is watered down and barely existent. "White" borrows from almost every Asian horror film cliché—the wronged victim, the curse, the mystery that has to be solved. There is a grainy video showing some ghostly horror and a girl with long hair falling over her face (a la "Ringu"). There are also obvious references to popular western horror films like "Final Destination" and "Carrie", but with the exception of one scene in a dark dance studio most of the scares are ridiculous. It was difficult not to laugh through a few of them.

I don’t confess to know anything (or care much) about pop music, but the most interesting scenes in "White" are the ones that concentrate on the business behind groups like The Pink Dolls and the inner politics between the performers. The Pink Dolls isn’t a band of old friends who achieved fame only after practicing for hours in a garage. These girls barely knew each other and the group was manufactured like a business, to sell a product to pre-teen girls.
"White" also hints at the conniving and manipulating between artists who want to make it big. How far will a backup dancer go to become the “main,” and how far will the “main” go to retain that title? Perhaps most disturbing, how far will many girls go with their managers or sponsors to get a leg up over their fellow performers? No pun intended…

Unfortunately, "White: The Melody of the Curse" just glances over these points, and doesn’t spend nearly enough time with any of them. If the filmmakers had decided to concentrate on the dark side of the music business, it could have been an interesting film. The movie they chose instead felt convoluted and long (at 105 minutes), and I kept tapping my Ipad screen to see how much time was left.

Now if you’ll excuse me, I have to go listen to some Pantera to get those K-Pop melodies out of my head.