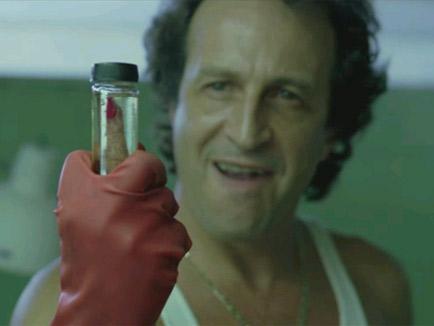 We Are What We Are (Movie Review)

The title is a good indication the family at the center of “We Are What We Are” is meant to be a bit of an enigma. The film opens with a somewhat on-the-nose indicator of the combination of social commentary and grisly horror that director Jorge Michel Grau is aiming for with his debut feature. A ragged-looking man dies outside a mannequin-filled window in a ritzy shopping mall. His dying spasms attracted little attention from the well-dressed shoppers but his body has barely even hit the floor before a cleaning crew drags it away and scrubs the floor clean, eliminating any evidence that he was ever there at all.

It turns out that the dead man from the prologue is the patriarch to an unusual family. His wife is a crazy-eyed hag, one son is a violence-prone hothead while the other is more sensitive and level-headed and his daughter is a pragmatic schemer. Until now the family has scraped by on the income from a watch repair stand at an open-air market, but with the father out of the picture their lives stand to become much more uncertain. They do have one alternate means of survival: they are cannibals who eat human flesh as a part of an ill-defined “ritual”. Now the children must step up to provide the meat for the ritual, which must be performed in the near future.

As inexperienced hunters, the boys face some difficulties in their initial efforts to bring home the bacon (or more accurately, the long pig). They work their way up from the lower echelons of society, starting with homeless kids before moving on to street-walking prostitutes and gay club hustlers. The brothers can’t agree on the proper way to subdue and kill their prey, but because of their mother’s tendency to pop up swinging a shovel these arguments tend to quickly become a moot point.

Meanwhile, the morgue attendants tending to the father’s body call in a pair of scuzzy cops when they find a gnawed human finger on the corpse. The embalmers want the cops to pursue the apparent cannibalism, not out of some sense of human decency and a desire to see justice done but because they realize that being involved in such a case could lead to fame and riches all around. The cops initially scoff at the suggestion, saying that cannibalism is a shockingly mundane occurrence in Mexico, but they eventually succumb to the easy money that solving the case would lead to. The cops begin to close in on the family as they get closer to having enough meat to complete the ritual.

“We Are What We Are” might sound an awful lot like “The Mexican Chainsaw Massacre” but while it shares a similar subject matter and docudrama tone with Tobe Hooper’s classic, the truth is this is much more of a family drama with gore than it is a typical horror movie. It fits in well with the recent wave of horror-ish foreign language films we’ve seen such as “Dogtooth” and “Martyrs”, movies that take the social drama and understated style typical of the arthouse and add in enough grue and terror to tweak the milquetoast tastes of the more traditional film festival crowd.

Often, though, “We Are What We Are” feels a bit undercooked. The theme of social classes preying upon the classes beneath them is obvious and never really goes anywhere. It’s an odd choice also to leave the cannibalistic ritual, one of the most interesting aspects of the film, completely unexplained and uncommented on. There are accounts of cannibalism among ancient Mexican societies such as the Aztecs. Is this ritual a modern-day adaptation of these ancient customs? Maybe. We never really get much information. We don’t necessarily need a full explanation – the vague and matter-of-fact way the family deals with the ritual makes it feel more like a normal part of their life and less like something spooky a screenwriter came up with. Still, most of the scenes dealing with the ritual have more in common with “Dexter” or any other serial killer story than they do with some ancient passed-down rite.

“We Are What We Are” doesn’t quite succeed as social commentary and can be a bit plodding in the pacing department at times but it is a well-made, interesting, original feature that will be of interest to fans of the more refined side of modern horror. Special mention should also be given to the slashing string soundtrack by Enrico Chapela which is one of the best horror scores of recent years, effectively evoking a dark and gritty segment of society where the phrase “dog eat dog” is all too literal.

Empire of Passion (Ai no borei)