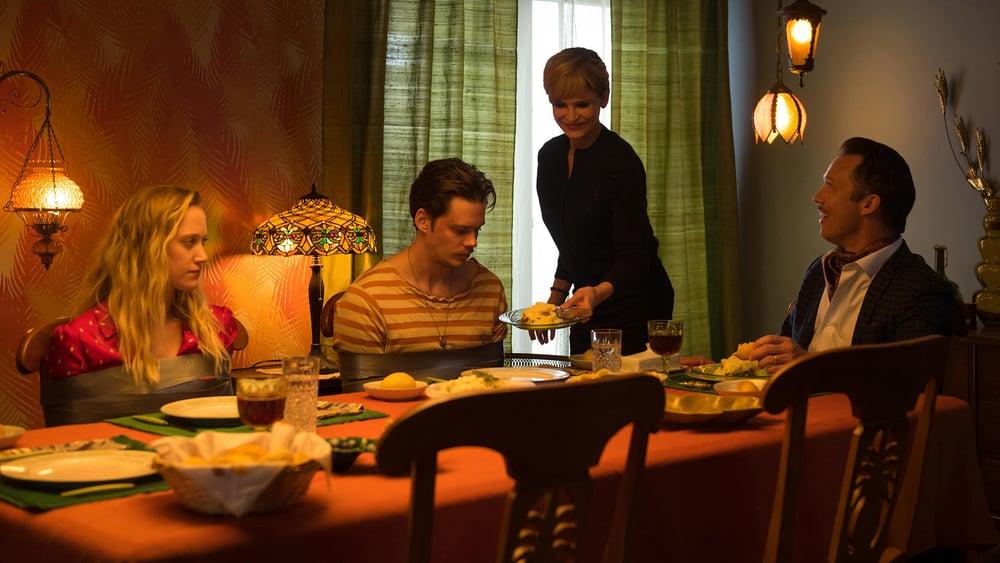 With all the popularity and press Bill Skarsgård received for his portrayal of Stephen King's iconic killer clown it's surprising nearly no one was talking about his performance in the criminally overlooked Villains. The film, released with very little advertising or buzz following a short film festival run, features a quadruple threat of fiendishly eccentric performances and is devilishly fun despite its particularly grim subject matter.

Skarsgård stars alongside another recent genre fav Maika Monroe (It Follows, The Guest) as Mickey and Jules, a pair of amateur criminals looking for a place to lay low when their car breaks down following a robbery. They stumble upon what they believe is an empty vacation home only to uncover a shocking secret in the basement that the homeowners George (Jeffrey Donovan) and Gloria (Kyra Sedgwick) are determined to keep hidden.

Villains is Dan Berk and Robert Olson's third feature (the other two being Body and Stake Land II: The Stakelander) and is their most confident production. Pulling double duty as writers, their script is loaded with a number of reveals and turns to keep the audience guessing. When combined with the wild tone of the performances the film becomes one fun little ride. The tone is perhaps the film's biggest asset, given some of the shocking and unsettling aspects of its plot.

The performances here are larger than life and at times you can buy certain scenes featuring more natural dialogue. However, at no point does the film try to sell these characters as being relatable in a traditional sense. Skarsgard and Monroe early and often are fast talking cartoon character junkies with ambitious crime related goals sobered by a shocking discovery. Then, we're introduced to the scene stealing and commandingly funny performance of Jeffrey Donovan who is clearly having the time of his life in this role. In essence, Villains often feels like a heightened thriller reimagined as a Looney Toons cartoon and the result is far better than that description would have you believe.

Everything else in the movie goes big, which might be a survival mechanism to hide how fairly generic it's setup and plot mechanics are. It is highly probable the film's audience has seen numerous takes on this idea, but none of those iterations are quite like what Berk and Olson have orchestrated here. The memorable qualities of Villains are not the structure and setup, but all the props and performances. It’s the elaboration that makes the film feel new and exciting.

The whole cast is clearly having an absolute blast from opening to the credits. Berk and Olson don't have the name recognition or box office pull that a Stephen King property has. It’s easy to see how this Skarsgård vehicle was eclipsed at the end of 2019. Now that the blockbuster spooky clown has retired (for at least a while) It's time for Villains to get some attention from the genre crowd it deserves.