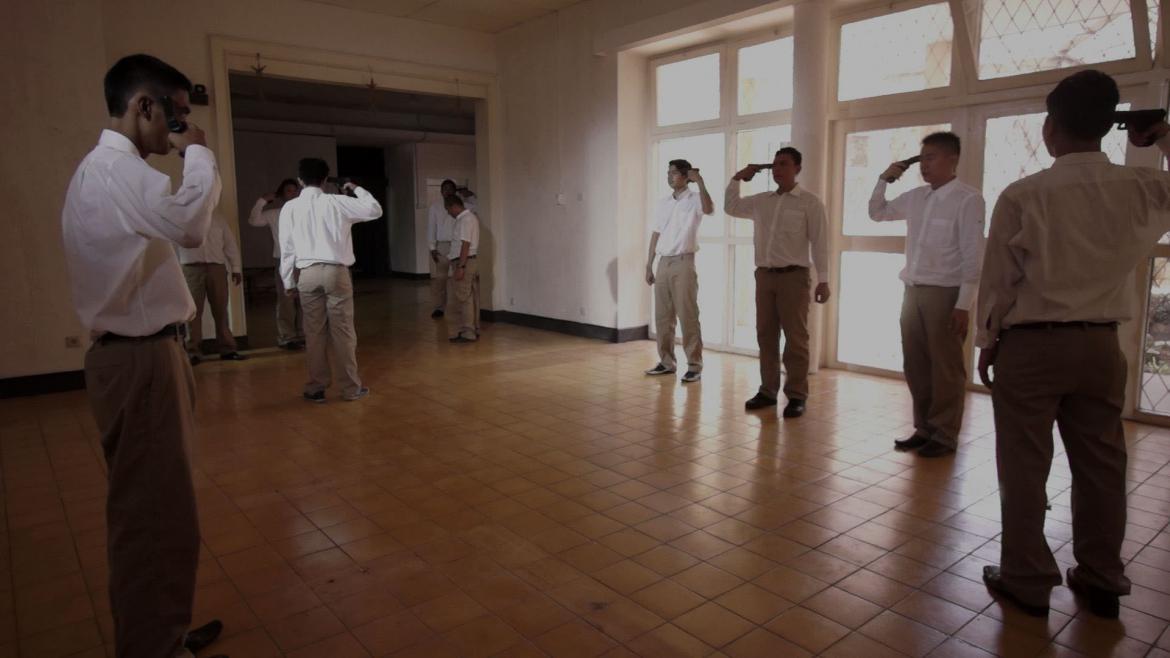 Amidst internet acclaim and a wide array of excitement from the horror community, "V/H/S/2" arrived today 6/6/13 on demand throughout streaming services all across America. Local cable providers, iTunes, Vudu, CinemaNow and a variety of other outlets are carrying the independent anthology horror sequel at a robust $9.99 price tag per rental. This is all before the film expands to a limited theater engagement throughout the summer in a variety of densely populated cities. So with all the commotion and hype, especially considering its predecessors lukewarm reception, is "V/H/S/2" worth watching with an on demand price tag so high right now today? Or should a simpler question be posed, is it good?

The sequel begins in a similar way to the original feature: handheld camera, sexually imagery, and a frame narrative designed to carry cameras throughout. In this case our avatars are a pair of private detectives. Having just left a motel gathering footage of a cheating spouse, the couple make their way to a house in an effort to find another client's missing son. This location is his last known whereabouts and they enter the premises in hopes of locating the missing individual or at least finding clues. Just before she begins her trip into the carnage she's treated to a brief glimpse of the previous film's characters 'sharking' escapades to announce we're in the same world. It's here where our female lead is tasked with cycling through a computer's video files and is lead to watch this film's segments on...VHS.

Setting the tone for the entire film is crucial with a sequel of this ilk. Pacing, style, and more importantly visceral thrills are needed to immediately engage the audience. Thankfully, "Clinical Trials" does this with great aplomb. A basic and previously done concept, the segment focuses on a man who's just received a prototype replacement eye from a company after he loses his during a car accident. It's explained to him that the eye has glitches that may interfere with his focus for the first couple of days. Once he arrives home though he finds himself beset upon by a variety of bloody apparitions that seem to focus clearly on his presence. As the first real jolt of energy for this film, "Clinical Trials" succeeds in providing a variety of solid scares and interesting scenarios whilst not overstaying its welcome. There is a clear vision from director Adam Wingard that concludes just when it needs to and effects you but doesn't bore. But one other element the segment succeeds at is providing a breathtaking setting for its activities. The house itself is a character and this theme becomes consistent throughout the other segments. Each location is unique, provocative and interesting in a variety of ways that utilize their attributes to the fullest.

Chapter two, "A Ride in the Park", begins with a bicycle enthusiast out for a morning ride; but it also provides the usage of a GoPro camera atop the bikers helmet. He is quickly attacked by a handful of zombies and gets bitten. It's mere minutes before he fully transforms and we're treated to the film stylings of 'Zombie GoPro' cam. The in your face, and darkly comedic, way this segment proceeds is altogether stomach turning, laugh out loud funny, and heart breaking. It's the simplest yet most well conceived concept amongst the bunch, and provides a great break in the terror for the carnage still to come. Directors Gregg Hale and Eduardo Sanchez's film may have been better suited in the third slot though amongst this quartet of terror.

Next up director Gareth Evans, well known for "The Raid: Redemption", and Timo Tjahjanto deliver the masterwork of this collection. This "Safe Haven" is not a Nicholas Sparks written romantic drama; it's a brutal, exhausting trip to hell through the world of an Indonesian cult created by 'The Father' (Epy Kusnandar) where a variety of popular cult elements are combined into a macabre maze of blood, babies and demons. Without giving too much away this short focuses on a film crew who've asked permission to document the goings on behind 'The Father' and his ministry deep in the heart of Indonesia on a compound secluded from the outside world. Various, and legitimate, instances cause the group to split up but leave them prey to the madness ready to unfold. There are a few instances in which characters behave illogically, and the unfortunate found footage trope of 'carrying a camera when you should be full sprinting' come into play. But otherwise this segment is a homerun of foreign horror. A final shot, and word, that could've been a wonderful finale is slightly lessened by the brightness of day and not quite all the way there effects. Though it's still the opinion of this reviewer this should've been the final segment to this series as it carries the most weight and delivers the craziest thrills.

After traversing the back woods of a foreign land, we're back home in the US of A where two parents have left home for the weekend and left their teenage children to their own devices. The older sister immediately invites her boyfriend and friends over for some teenage debauchery. While the younger brothers make their own entertainment out of tormenting them and even interrupting them mid-coitus. But in a flash of light everything changes as aliens descend upon the lake house from the water and begin to abduct the group individually. Awash with deafening bass and and strobe light, "Alien Abduction Slumber Party" masks their aliens in elements and makes them into slow, sulking beasts not to trifled with. Director Jason Eisener uses a variety of camera tricks but most notably employs a 'dog cam' giving his characters good reason to carry their recording device with them throughout the ordeal. It's a well orchestrated and deeply terrifying sequence for those afraid of aliens, but still feels slightly lackluster as the finishing set piece behind "Safe Haven".

The frame narrative comes to a close again in rather unceremonious fashion, but the damage has been done. Personally I would have preferred the segments switch order a bit, but this is a small trifle. "V/H/S/2" is a resounding success for all involved thanks to clever camerawork, uniques concepts, and directors unafraid of showing seriously divisive and frightening material. If you're capable of viewing this in a major city on the big screen, my advice would be to hold off and see it with a crowd (I've attached the listings in the links). Otherwise this film is well worth the price of admission amongst a solid market of independent horror right now.