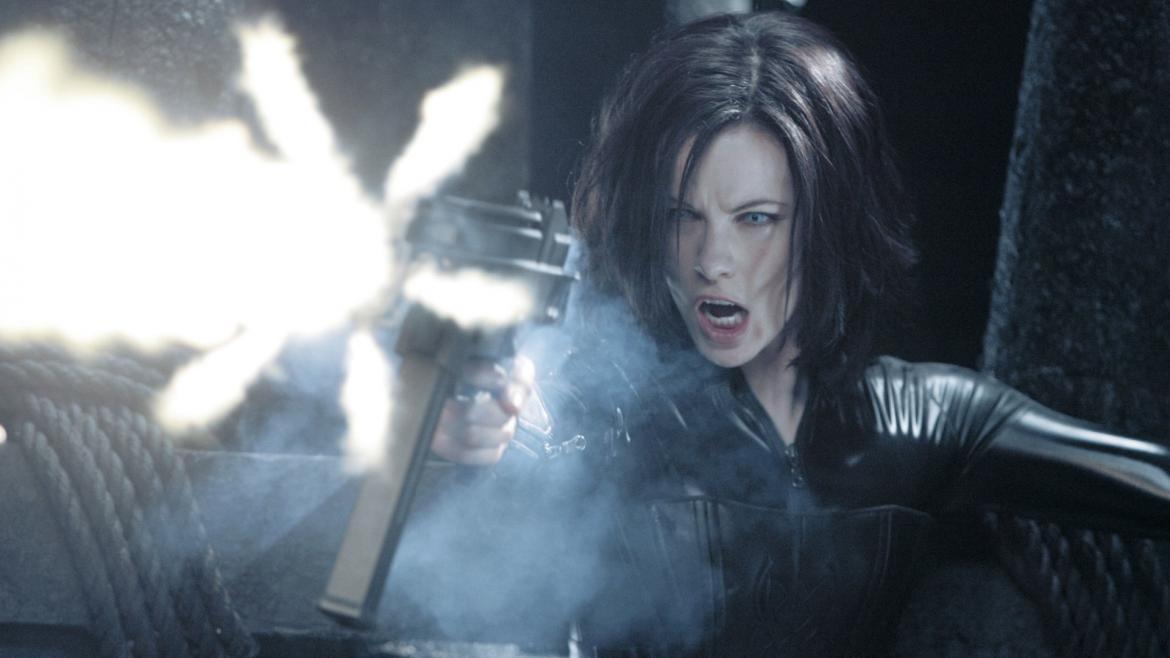 It's difficult to not feel incredibly anachronistic while watching Underworld. It's style situates it permanently in that period of two years or so when The Matrix turned a good portion of the film world into leather, black latex, and soundtracks comprised of random hard rock songs. In this instance, we've got leather clad vampires and werewolves playing out a twisted version of Romeo and Juliet between Selene (Kate Beckinsale) and Michael (Scott Speedman), but with many more fire fights than Shakespeare probably ever intended.

It's not just the aesthetics that make the film feel outdated (and it's not as though I don't have a soft spot for these aesthetic qualities), but also the feeling of scale that the movie presents. It was surprising how “small” the film felt, having not watched it in a while. The fact that the action is almost exclusively comprised of a few characters at a time shooting at each other from opposite ends of one hallway or another, with the occasional backflip thrown in, was something that was impossible to ignore once noticed. Of course, one half of that equation is Kate Beckinsale, who, admittedly, does pull off flipping and shooting while wearing latex (vinyl? PVC? I feel like my fetish gear knowledge is failing me here) with some impressive flair.

In a film that's so completely immersed in early aughts-goth trappings, the overly dramatic acting by most of the actors here luckily works most of the time. Our leads are fine: Beckinsale is subdued and doesn't really allow much insight into what Selene is going through and Speedman is decent, but doesn't really present us with a character that seems like he would be all that appealing to someone that had lived hundreds of years. Bill Nighy and Michael Sheen are both incredibly entertaining to watch as Viktor and Lucien respectively. And then there's Shane Brolly as Kraven. I feel like his performance is definitely drinking game material, and I'm just going to give him the benefit of the doubt and assume that that was an intentional choice.

Even though it's hard to ignore the rather basic nature of the action in the face of modern big budget action that can put whatever it wants on screen, the film does look fantastic. If Underworld has a lasting impact, it'll be due to its wild action scenes and for bringing some of the coolest looking werewolves ever put on screen.