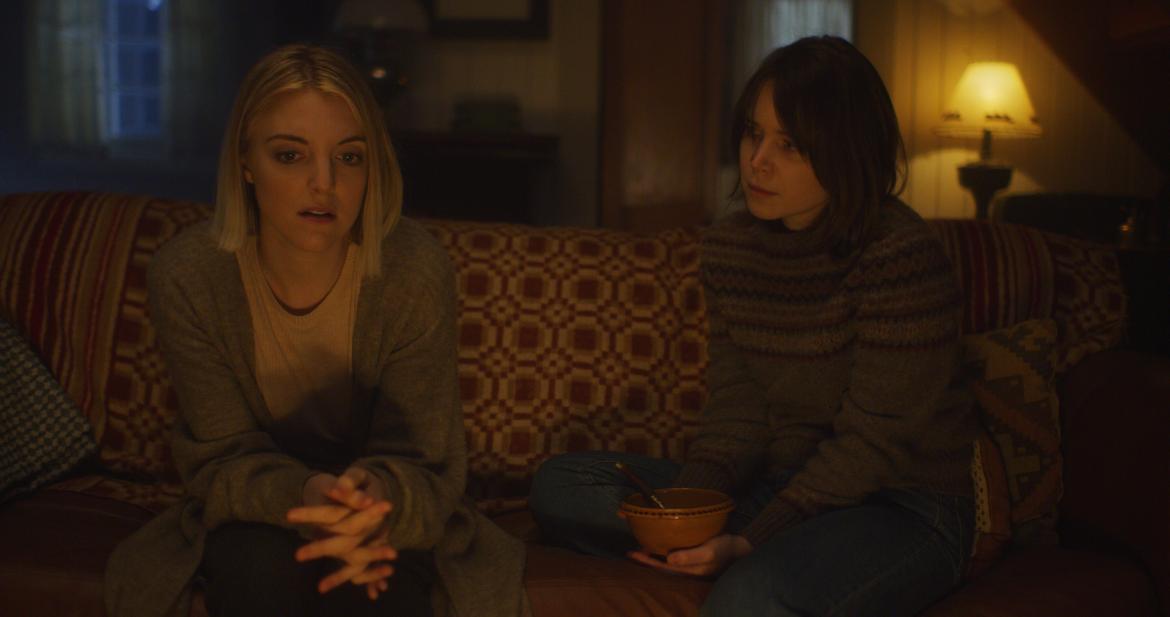 Amelia Moses’s Bleed with Me opens on a trio making their way to a secluded cabin in the middle of winter. Rowan (Lee Marshall) is snoozing in the back seat, catching quick glimpses of Emily (Lauren Beatty) and Brendan (Aris Tyros) as they continue their journey through the rural landscape. We learn the cabin has been in Emily’s family for decades and that the area is practically deserted during this time of year. The group settles into a routine that includes dinners, wine, and healthy doses of polite conversation that only cracks open into something more honest momentarily. As the days stretch on, Rowan becomes increasingly skeptical of the intentions of her host while also experiencing nightmares that may be closer to reality than what she thinks.

Moses’s feature debut as both director and writer displays a strong sense of mood and tone. The film effectively relies on isolating our subjectivities with Rowan and it’s clear Moses has a vision for reinvigorating the film’s generic setup. René Arseneau’s cinematography is assured yet never florid. Coupled with editing from Mattias Graham the film carries a constant thrum of unease as the audience grows increasingly wary of Rowan’s seemingly benevolent coworker and her hunky beau.

This isolation sensibility is the driving force behind Bleed with Me. From the first act it’s clear that Rowan’s presence on this sojourn is closer to charity than a signal of a growing friendship between her and Emily. Conversation is stilted and grasping. No one here really knows how to take care of one another and it’s apparent that Emily is looking for some sense of control as she continues to heal from an unidentified accident. During an early morning walk, Rowan looks on horrified as Emily prods the pelt of a dead rabbit caught in a snare, it’s blood rolling out of a gash in its throat. We’re reminded of the bathroom wallpaper in the cabin where Rowan stares into the mirror steeling herself while illustrated bunnies bound across the walls around her. Is Rowan just a pet to Emily? Or is that just how Rowan sees herself? This tension is what motivates Bleed with Me, and it’s a question everyone in this cabin is asking.

While the film has success in crafting this atmosphere, it can’t help but leave the viewer wanting more from the dialogue between the characters, particularly between Rowan and Emily. The trio of performers each bring varying degrees of dynamism and charisma to their roles, all suited to the task at hand. However, the script seems to find it difficult to allow it’s two female leads to talk about anything other than Brendan. Given that Emily expresses doubt about their relationship it is not an unearned line of reasoning but with the film’s underlying subtext and Rowan's implicit attraction to Emily (platonic and sexual) it seems like there is much richer material just under the surface of the banalities.

Rich in style and ripe with potential, Bleed with Me is an accomplished debut for filmmaker Amelia Moses. While some audiences may find it too familiar at times the film ultimately provides just enough originality and thoughtfulness to reward viewers willing to be trapped in a cabin with some people who may be a little too polite.