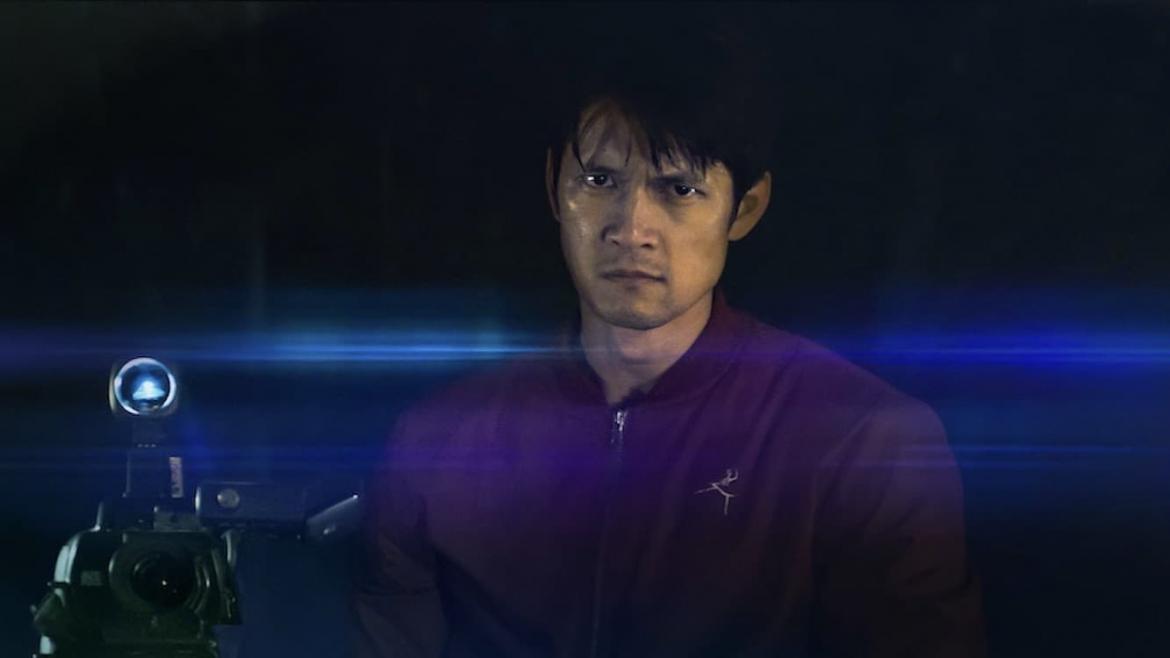 The term “broadcast signal intrusion” refers to, “the hijacking of broadcast signals of radio, television stations, cable television broadcast feeds or satellite signals without permission nor license.” This practice, also known as “Pirate Broadcasting,” has had many notable incidents throughout history.

It is exactly this strange event that concerns Jacob Gentry’s new film, Broadcast Sígnal Intrusion. Set in Chicago in 1999, the movie follows James (Harry Shum, Jr.), a video archivist living an incredibly solitary life. Grief-stricken by the disappearance of his wife, James belongs to a bereavement group, but avoids any intimacy with the other members. Even in his job, James works alone. He has a co-worker that we never see. The two communicate through post-it notes. When James stumbles upon some eerie broadcasts in the videos he’s archiving, he becomes obsessed with trying to find the source of the video and those responsible for it.

The intrusions themselves appear to be based on a famous real-life incident that occurred in Chicago in the late 80’s known as the “Max Headroom Incident.” On the evening of November 22, 1987, when a video of an individual wearing a character mask of the Max Headroom television character interrupted the programming of two stations in Chicago, Illinois. The act video also contained modified audio and a backing set designed to invoke the same design of the Max Headroom show.

Written by Phil Drinkwater and Tim Woodall, Broadcast Signal Intrusion is a tech noire. The person wearing the Max Headroom mask has been replaced by women wearing a featureless silicone mask with a black wig. All of the intrusions coincide with the disappearances of women around the Chicago area. Each lead that James finds takes him deeper and deeper into the madness. We even get a femme fatale of sorts when James meets a young woman named Alice (Kelley Mack) who follows him right down the rabbit hole.

For this reviewer, Broadcast Signal Intrusion was just too similar to another recent movie making the film festival rounds this year--Prano Bailey-Bond’s Censor. The latter was about a woman who worked as a film censor in Britain during the era of the Video Nasties, who becomes obsessed with a weird tape of questionable origins. Unfortunately, the comparison is not favorable. This film does not create the same, rich world that Censor does. Where that movie takes great care in its use of color by contrasting the drab greys and browns of Thatcher’s Britain with the oversaturated neons of the video nasties, Broadcast Signal Intrusion doesn’t seem as interested in crafting a visual language for itself. Both films are period pieces, but the amount of care given to their respective atmosphere’s is starkly different.

The intrusions themselves are really well-crafted. The masked figures move around erratically, in ways that make them look inhuman. The sounds design of these sequences imply voices that are more like garbled robotic sounds than actual words. They create a sense of stress and tension that is undeniable. However, the story itself is somewhat lacking. In a movie about a man’s quest for answers, it is telling that I was more interested in the videos of what appeared to be robots than I was in the real, flesh and blood people at the film’s core.

As can often be the case in neo-noire (such as David Robert Mitchell’s Under the Silver Lake, Paul Thomas Anderson’s Inherent Vice, and Rian Johnson’s Brick) one needs to be ready to go along for a meandering ride. Unfortunately, when Broadcast Signal Intrusion draws to a close, the conclusion feels both too random and not random enough. This reviewer was left cold, not unlike a weird, android lady in a creepy signal intrusion.