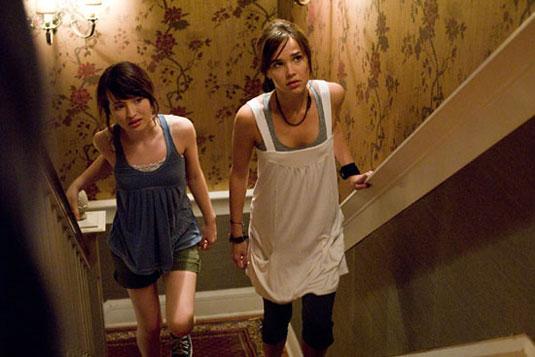 In many ways "The Uninvited" seems a bit late to the party. We're nearly a year removed from the theatrical debut of the remake of "The Eye" starring Jessica Alba, when I triumphantly declared to anyone who would listen, "the Asian horror remake craze is dead!" It seemed logical at the time. American audiences were drawing tired of the ghost movie cliches and the decreasingly scary images being thrown at us, and one had to think that the studios were losing interest due to the diminishing returns. In that context it's unfortunate that "The Uninvited" is showing up so late in the cycle, because although problematic in a few areas, it more than serves as a breath of fresh air in a tired, tired subgenre.

Based on the Korean film from 2003 called "A Tale of Two Sisters", "The Uninvited" centers on a family torn apart. 10 months after a mysterious explosion killed her invalid mother, young Anna (Emily Browning) returns home from a psych ward after attempting suicide in the aftermath of her mother's death. When she returns, she finds that her mother's former live-in nurse Rachael (Elizabeth Banks) has moved into her house and is in a relationship with her father. Clearly distraught over the prospect of having her dead mother replaced by a much younger woman, Anna seeks comfort in her sister Alex (Arielle Kebbel), who has been dealing with the family issues by being generally rebellious and drinking her angst away.

What unfolds is pure "Hamlet", with Anna and Alex slowly unraveling the mystery of their mother's death. Eventually they begin to lean towards the conclusion that we're already aware of because of the trailer, that Rachael is responsible, and it's only a matter of time before she tries to take them out of the picture as well. The "ghost" aspect in this film comes in the form of "warnings", presumably sent by Anna's mother to her in her dreams, that seem to be pointing towards Rachael as the murderer. Throughout the film we're shown ominous warnings and twisted figures that are plaguing Anna as she tries to get back her missing memories from what really happened that night.

As a result of some decent writing and solid performances all around, I found myself surprisingly engaged with "The Uninvited" from early on, which is more than I can say for some of its contemporaries like "Shutter" or "The Eye". Kebbell and Browning are sympathetic and endearing as a pair of ultimately tragic sisters, and Banks more than proves her chops as a dramatic actress in this film. Although most of the ghostly set pieces amount to little more than dim lighting and loud noises, I still found them to be handled with enough class and precision as to be effective. I'm more than a little ashamed to admit the number of times I jumped out of my seat while watching this.

Despite being handled well, the real trick for a movie like this is to rise above those cliches and bring something different to the table, and that's where "The Uninvited" really shines compared to its peers. By focusing on the human drama and having Banks as the real antagonist, the story allows for more visceral suspense than the typical ghost story. There is a real, tangible threat to these girls throughout the film, and that keeps you invested in their fates. In that sense you could say that this is almost more of a thriller than a horror film, but it definitely works in its favor.

The last 30 minutes or so are going to really make or break this for you, as a reveal towards the end severely alters your perception of the events of the first hour. These kinds of moves are always tricky, and will no doubt leave some a little unsatisfied. It's certainly not original, but for me it worked, and helped elevate the picture beyond the sum of its parts. Despite all appearances from the marketing, this is the kind of film that will turn your gears for at least a few hours after it's over with. In fact, I'm looking forward to a second viewing on video just so that I can unwind everything a bit more.

It's sad then to think of "The Uninvited" as a fashionably late party-goer, showing up to American cineplexes a few years too late, wearing its best evening dress and wondering where the hell everyone is. It's not going to blow you away, but I found it to be a surprisingly enjoyable hour and a half. Based on the empty theater I viewed it in however, it may already be too late not just for this film, but for the Asian inspired ghost story as well.