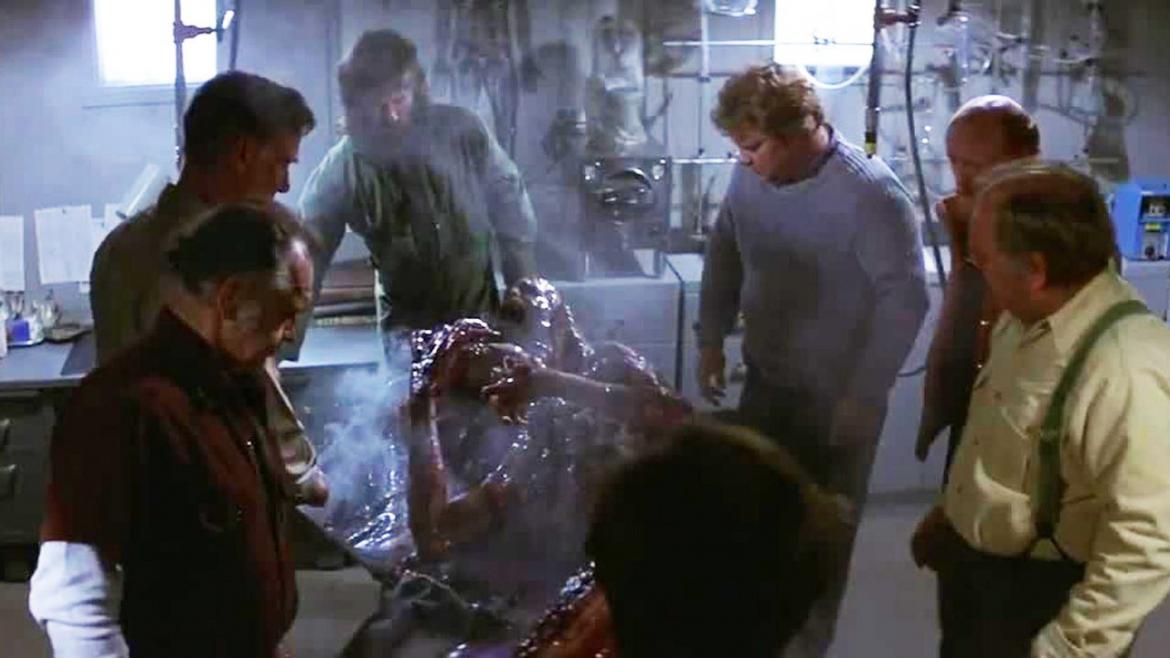 Isolation is a key ingredient in most horror movies. Whether by physical geography or emotional separation, the less contact the character(s) have with the world as a whole, the quicker the anxiety creeps in. As technology becomes more universally prevalent, it becomes harder and harder for films to believably create and maintain that isolation. Older films have it even harder, as the lack of technology they had to work around can immediately show their age. But when it comes to getting your cast trapped, it doesn’t get a whole lot more isolated than the end of the world.

John Carpenter’s The Thing was the third screen adaptation (there have been four to date) of John W. Campell, Jr.’s short story “Who Goes There?”. The novella tells the tale of a group of researchers stationed at an outpost at the South Pole who come into contact with a monster they are wholly unequipped to deal with. Of the adaptations that came before it - most notably The Thing From Another World - Carpenter’s is the closest to the original source material. The men’s quiet camp is interrupted one afternoon when a gun-wielding Norwegian chasing a sled dog crashes into their camp. Unable to reason with him, they kill the Norwegian and take the dog in, but it isn’t long before they realize that the Norwegian was right.

When the men’s own dogs begin going crazy that night, one of the men goes to check on them, only to find that the dog they took in has been ripped apart to reveal the disgusting monster inside. Before they realize the full weight of what’s going on, it’s too late. The Thing moves throughout camp, silently taking the shape of a human host and creating distrust and paranoia among the men. Tensions only grow, each character becoming more and more separated from the group, as the researchers begin to turn on one another to save their own skin - literally.

This fear of an other that cannot be easily identified is a striking departure from the gargantuan and easily identifiable monster in The Thing From Another World (which Carpenter shows his love for in Halloween by having his characters watch it on TV) and this shift seems to have some heavy cultural significance. At the time of the film’s release in 1982, the US was in the middle of the Cold War and paranoia had become an undercurrent of our American identity. The fact that the “enemy” didn’t have a clearly identifiable face, coupled with the threat of a bomb that could come from anywhere, at any time, didn’t help matters. Whether they knew it or not, American audiences were seeing their own fear and suspicion projected right back at them.

The Thing was John Carpenter’s first real foray into the world of major motion pictures and the $10 million dollar budget can be seen from the star-studded cast to the stunning practical effects and makeup that bring The Thing to life. Each piece of the monster is meticulously detailed, from the real animal organs in the autopsy scene, to what Makeup and Effects Designer, Rob Bottin, called the “pissed off cabbage” - a flower made from tongues and teeth that was used as part of the Thing’s debut in the dog cage. Rob Bottin was only twenty-two when he started the project and was admitted to the hospital for exhaustion during production. The results of all of this work cannot be overstated. And while, at the time of its release, The Thing was considered a flop, with audiences and critics alike bemoaning its gore, the effects and story have stood the test of time. Ask just about any self-respecting horror fan and they will have nothing but praise for The Thing. With an incredibly simple premise, Carpenter is able to root down to a very primal fear; when the enemy doesn’t look like a monster, how much can we really trust anyone?