The Shape of Water (Movie Review) 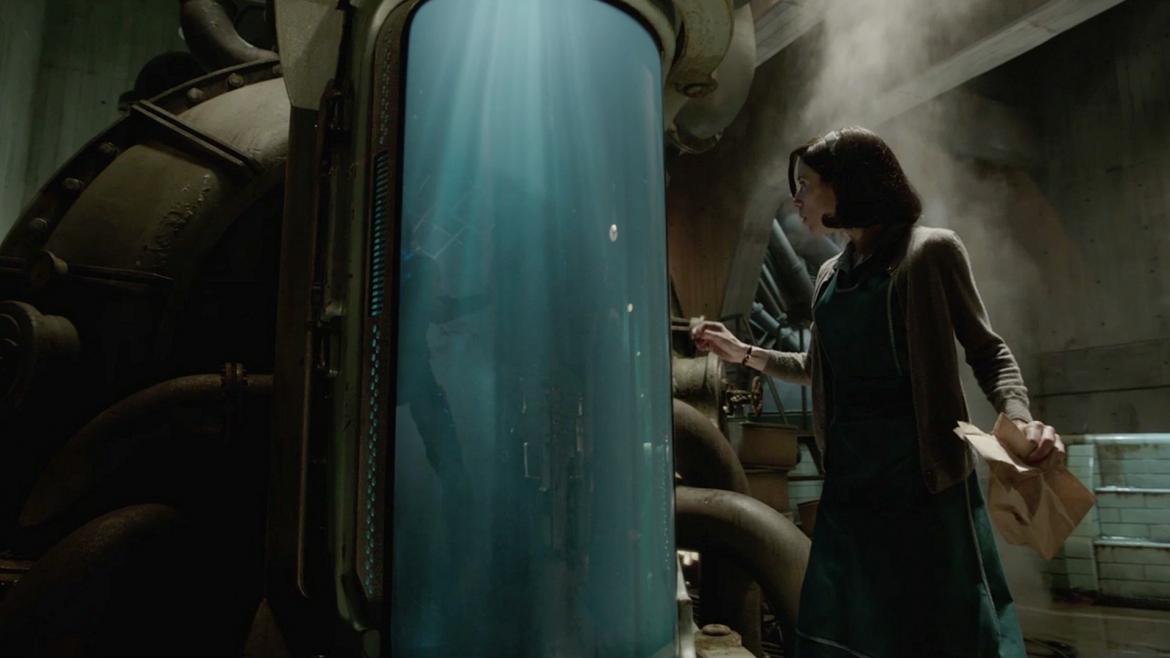 Director Guillermo del Toro tends to play well within period-piece settings, using his strong visuals and attention to detail to create a story that makes whatever world or period of time feel completely realistic. Whether looking at the modern world through the lens of giant mechs and monsters in Pacific Rim or telling the tragic story of children surviving a war-torn Spain in The Devil's Backbone, del Toro takes risks in what he puts his characters through regardless of setting. Surprisingly, looking at his varied and gutsy background, his most recent film, The Shape of Water, is arguably his most risky. While many stories have made love between a human and a "monster" feel realistic and palatable, a la Beauty and the Beast or even Edward Scissorhands, The Shape of Water asks more of its audience by defining its morality with a gray line. Not every creature is just a spell away from becoming human and what we accept as worthy of love, and thankfully, The Shape of Water has the guts to turn the tide and ask us to look deeper into the idea of monsters and men.

Set in Cold War-era America, the film follows Elisa Esposito (Sally Hawkins), a mute janitor at a remote research facility, whose life is filled with daydreaming, movies, music, and the affection of two close friends. Fellow co-worker Zelda (Octavia Spencer) and neighbor Giles (Richard Jenkins) have their own routine-based lives, but they manage to find joy in their friend. Despite often being ignored by the military and scientific staff working at the facility, Elisa and Zelda run across Colonel Richard Strickland (Michael Shannon) enough to see his feined politeness is just a cover for his need to control his latest project. Little does Elisa anticipate, but Strickland's major focus, a mysterious bi-pedal amphibian, will become a source of companionship and love. However, the study of the creature turns torturous due to Strickland's narrow-minded view of the amphibian, believing it to only be a monster from the deep. After developing a close relationship with the creature through a sharing of eggs and music, Elisa is forced to hatch a rescue plan for the amphibian, especially with the added stress of Dr. Robert Hoffstetler's (Michael Stuhlbarg) desire to sell the creature to another party.

As with most of del Toro's work, The Shape of Water manages to unravel a fairly straightforward plot, trading in the often convoluted science fiction plots of recent popularity to, instead, inject a majority of the story's development through the characters and themes. While most of the players seem to be carbon copies of characters seen throughout film history, like Michael Shannon's portrayal of Colonel Richard Strickland as a callous government agent, del Toro makes sure to flip around what audiences might initially expect. Elisa, for example, seems on the surface to be a virginal woman trapped behind a disability and outward shyness but is actually a confident and sexually mature protagonist. After a beautiful and fairytale-esque opening sequence, we get a glimpse at Elisa's daily routine, and unlike what we might expect from someone looking for love, she takes control of her own sexual pleasure, making it clear early on that her true desires comes down to something much deeper than just sex. In fact, del Toro tells a great deal about each of the main characters by comparing and contrasting their sexual choices. Strickland's controlling and machine-like approach to making love to his wife is mundane and crossing into the line of abusive, while Elisa and the creature's affair is always painted with a brush of joy and pure ecstasy. For a story that closely follows the lives of vastly different people, including a character that would stereotypically be viewed as simply a monster, del Toro manages to make them all feel connected this way, putting the idea of romance and carnal pleasure side by side. Yes, the amphibian shows signs of being a creature adhering to its need to hunt and harm, but del Toro expertly pairs this carnal act with Elisa's own desire for physical pleasure, creating a morally gray area that asks the viewer to see their carnal, "animalistic" side as good and healthy. In the same vein, though, del Toro uses Strickland's own "manly" side to explore the other end of a human's carnal nature, showing how the need to control and dominate over other living things can lead to destruction.

Pulling inspiration from the title of the film, the answers to many of the questions the themes pose aren't concrete, but instead, are merely outlines and shapes that provide more weight for the themes as a whole. We don't get a clear background on the creature, and while most sci-fi and fantasy films rely on tying in history and what makes the monster tick, del Toro is clearly much more interested in dipping his hand into the waters of the genre, fishing out the themes of love and fate, and putting them on display as beautifully as possible. While there are three separate plots that involve using the creature for some form of gain, there's a clear direction with how each ultimately interacts with and chooses to view the amphibian. Elisa's love for the creature is shown through physical embraces, quirky dream sequences of vaudeville, and an overall acceptance of the monster's personality. Del Toro plays with these threads by inserting them into Strickland and Hoffstetler's plots in different ways, too, from viewing the monster as a means of financial gain to just another thing to control. Each of the three characters has their own journey, but in the end, love wins, and not in the stereotypical sense, as del Toro once again subverts genre tropes by putting the emphasis on the themes. He also accomplishes this through the visuals, which maintain a watercolor aesthetic throughout the entire run of the film. While blues and greens are the foundation to the film's color palette, brief uses of red and white make their way into visual storytelling, creating visual cues of texture to many scenes, much like the rich depth found in the film's character development.

The Shape of Water is a pure fairytale, with its dream-like visuals and otherworldly plot, but with del Toro in control, it still feels relatable beyond anything he's accomplished before. Outstanding performances across the board help the movie feel as classy and rich as the writing warrants, but more importantly, the tone put forth plays with genre expectations, creating a solid and highly recommendable experience. No, not every detail and background for why the creature is being studied is explained, but that's okay. The connections and fear it strikes into the human race is put on display instead, making an intriguing character study that will likely give every viewer something different to appreciate.