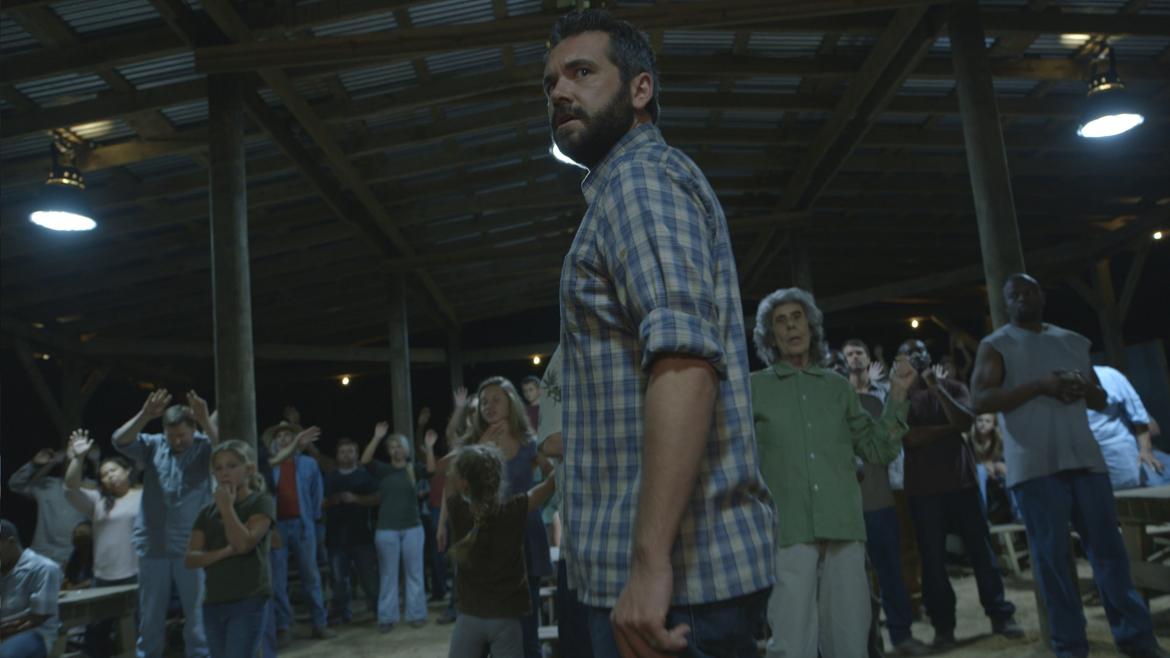 Though being accused by some around these parts as being in love with his own smells, I tend to completely buy Ti West’s filmmaking, finding confidence and strategy where some find pretension. Now tackling the western in his upcoming “In a Valley of Violence” West, like Adam Wingard and Simon Barrett, is on a gradual move outside horror proper. If his latest 2013 release The Sacrament is any indication this move should be, in the very least, fascinating to watch.

Set in ‘Not-‘merica’ The Sacrament depicts a three-member Vice Media team’s trip to reconnect with one of their estranged sisters. Photographer Patrick (Kentucker Audley) receives a cryptic note from sister Caroline (Amy Seimetz) inviting him to visit some sort of clean living church group she has recently shacked up with. Correspondent Sam (AJ Bowen) and videographer Jake (Joe Swanberg) accompany Patrick to investigate the kooky Christ community. Once there they encounter an agrarian utopia run by a man referred to as Father (Gene Jones). Equally enigmatic and charismatic, Father’s true intentions with the community quickly become suspect.

The Sacrament is presented almost completely from the perspective of Jake’s camera. Some handy intertitles in the film’s prologue refer to this style of journalism as “immersion(ism)” which is corroborated by Wikipedia so you know it’s legit. Coupled with a fantastic score from genre veteran Tyler Bates, the monochromatic, nearly desaturated look of the film is a breath of fresh air from the artificial digital defects and grainy lo-fi of the aesthetic’s ancestors.

West’s abilities at creating and sustaining tension haven’t let up. Swanberg and Bowen have a well-tailored chemistry that teeters back and forth between sincere and puerile. Gene Jones brings an incredible gravitas absolutely running every one of his scenes. And while some of the first person gimmicks are called upon for occasional use (I’m looking at you, suddenly stationary camera pointed in just the right direction) the overall conceit works in great effect for the purposes of a narrative that’s less horror and more grim satire.

The film is certainly West’s most ambitious in scope to date. But in attempting to address a laundry list of sociological and political topics, ranging from racism to Luddism and evangelical Christianity, the film begins losing site of a particular satirical focus. Supporting characters feel forced and motivations become suspect or transparent. The film’s gestures at greater social ills begin to fall flat and we’re left with little to remember from earlier interviews with the community’s residents.

Despite all thisThe Sacrament continues to work on a visceral level resulting in a tight, intriguing film. At a time when “cinematic universes” are disseminating across media like this persistent rash (I don’t judge you!) I’ll take a filmmaker like West and movies like The Sacrament.