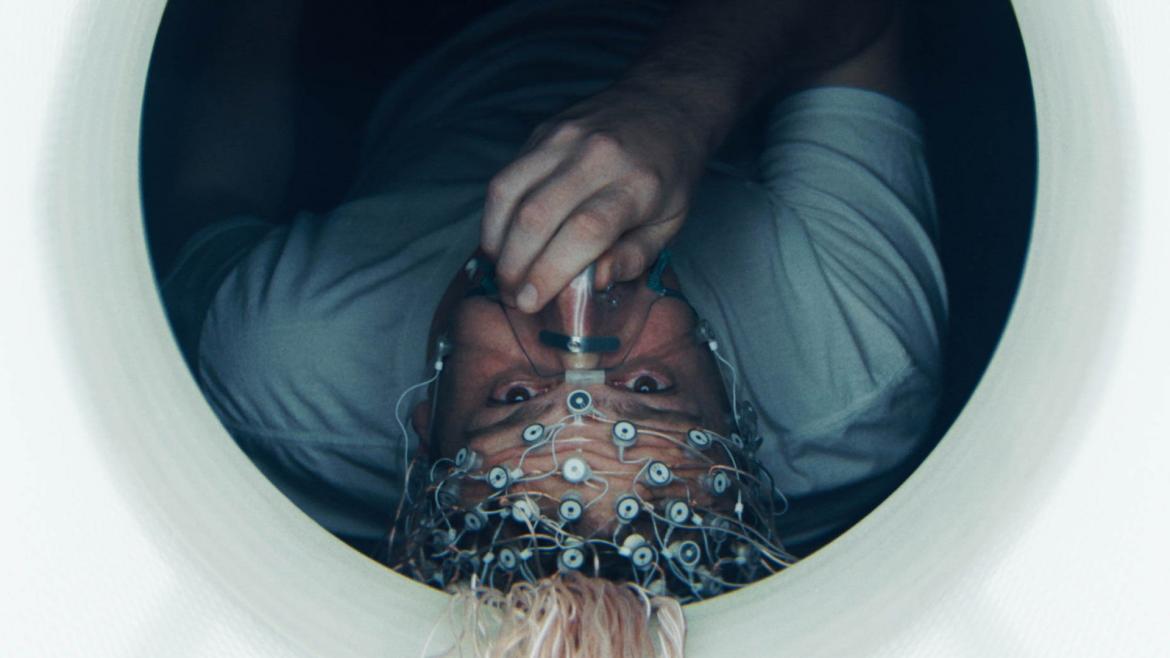 Let's get this out in the open right off the bat. At least 90% or more of people who queue up Netflix's latest original movie, The Discovery, will disagree vehemently that it is a horror movie--and obviously since you're reading this, I disagree with that. This Jason Segal vehicle is so heavily doused in melodrama that one cannot blame anyone for writing it off as high concept drama and not extend it the courtesy of recognizing its reach into the sci-fi and horror genres. There are no monsters, no ghosts or masked slasher stomping around murdering over sexed teens. Yet The Discovery's body count eclipses that of any horror movie ever made combined (outside of the apocalypse subgenre) because it delves deeply into the realm of existential horror by tackling a 'what if' that is haunting in concept.

What if there was scientific proof of an afterlife? That's the pivot point at which The Discovery balances. As intriguing as that setup is, Charlie McDowell chooses to use is as a backdrop to a poorly conceived love story in which sad Marshall Eriksen mopes around disapproving of an astounding scientific achievement made by his father (Robert Redford) while also slowly--very slowly until it's all of a sudden--falling in love with a damaged and quirky girl (Rooney Mara). Redford brings his Redfordness to the table as Thomas, a man who proved the existence that our soul leaves our body after death. The sudden verification of an afterlife causes millions of people--athletes, celebrities and the average joe--to commit suicide. Six months later Will (who also contributed to the work) is returning to the compound to assist in his father's followup to an already controversial and deadly discovery--but bumps into the mysterious Isla (Mara) along the way and brings her along.

The Discovery is a hard film to enjoy. To do so you have to buy in to the world McDowell has presented, but he doesn't want you to have that many details about that world. All we know is that millions of people suddenly decided that--with proof of an afterlife--they didn't want to live their current life anymore. McDowell is simply interested in asking questions from both sides of the spectrum that come from that. Why would just knowing there's an afterlife be enough? What if the afterlife sucks? The morality and sadness of suicide draped all over the movie and the approachability of the film is questionable because of its dreary subject matter. However if you can place yourself in the surreal feeling of what it would be like to live in a world wear millions of people suddenly offed themselves, The Discovery is an eerie and often effective little slice of drama that has just enough sci-fi/horror elements to be the other side of the hair I just took it upon myself to split.

McDowell's reach exceeds his grasp eventually though as little interest is given to exploring the fascinating concept at hand and more about the mostly thin characters with motivations that turn on a time or have no logical direction in general. Teases of cult like behavior, explorations into the morality of murder with the proof of afterlife and even some ghostly glimpses into what the afterlife actually is. Then, in the last act McDowell then tries to turn the screws on the audience once more--for funsies--which adds another interesting layer to the concept, but there isn't nearly enough time to develop the idea into anything much deeper other than manipulating the audience emotionally.

For better or worse The Discovery is a high concept bottle film boasting a psychological tug-of-war between science and faith. It's an ageless argument and McDowell's film tackles it by asking lots of open ended questions and never offering up much in the way of closure. However, The Discovery does open the door to some interesting conversations while humming a dreary tone, being hauntingly surreal and frustratingly vague.