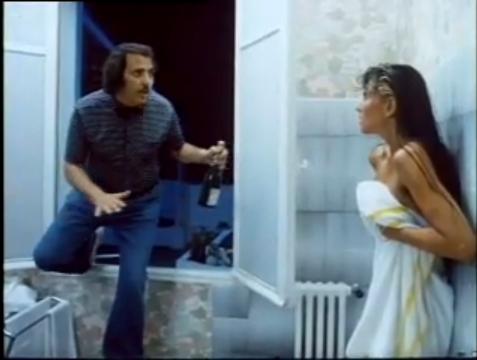 Vinny Durand. He’s a NYC cab driver with an attitude and a dream. He doesn’t plan on being a cab driver forever; someday he’s going to be an award winning film director. He figures that you can’t go about becoming achieving that dream without a plan, and his plan is grand. He's going to cast the biggest horror movie star on the planet; Jana Bates. Armed with nothing but delusions of grandeur, Vinny packs his bags and flies off to the 1981 Cannes Film Festival where Jana will be in full prominence. As her friends and loved ones start to disappear one by one, it soon becomes apparent that Vinny may have some issues beyond far fetched ideas.

Coming in at the tail of 70s fashion and atmosphere, "The Last Horror Film" is quite quirky in its appearance. Disco clothes and decorations lay the wacky atmosphere on thick. While it definitely feels dated, there are many aspects to the story that help connect the movie with modern sensibilities of unprecedented celebrity access in the age of Internet journalism, which lets the movie still feel relevant despite its corniness. There are a few gruesome murders here, a touch of gore and heaps of post 70's excess, but its not the type of horror film that sets out to disgust the viewer. The most disturbing aspect of the film comes from the extremely sweaty Vinny and the unhinged portrayal of a man obsessed.

Played expertly and convincingly by "Maniac" madman Joe Spinell, the character of Vinny Durand is the most interesting of all the characters in "The Last Horror Film." He manages to elicit a number of different emotions from the viewer ranging from disgust at his appearance, unease ain his twitchy and obsessive manners, remorse in his difficulty finding anyone to believe him, and sadness in the fact the man simply doesn’t have the means to achieve his goals. He is a fleshed out character that is uncommon from films in the 80's, robust and unsettling. Working alongside Spinell in this film is the the beautiful former Hammer Hottie Carolyn Munroe. Long since establishing herself in the horror genre, she gets to show off her glamorous super star side here. She does appear stiff throughout much of the movie, but it seems obvious that this is to be part of the character. Aside from the odd “Nick Fury” stripes emblazoning her long hair, she works well in the role of movie mega star and looks the part as well.

“The Last Horror Film” as a story works well and is solidly written. There is a healthy does of campy humor and b-grade slasher scenes that fit well with the early 80’s setting and a touch of drama to flesh out the main character. They do however fail to give you much as far as character development outside of Vinny Durand. While he gets the full treatment, everybody else, including Jana Bates, is basically there for set dressing. This works for the most part seeing as the film is primarily about Vinnie, but it's hard to feel any remorse for anything that happens throughout the film. Despite the slower pace, the story is still engaging enough and makes for a decent watch.

There is a lot of depth to "The Last Horror Film" and for a movie that came out at the head of the early 80’s camp film rush, this is a rarity. The movie is slow and sometimes distracting in appearance, thanks in part to the numerous pairs of female breasts throughout the film, but it is definitely watchable. For a taste of Carolyn Munroe and something that wouldn’t look bad on any horror collector's shelf, give this one a watch.