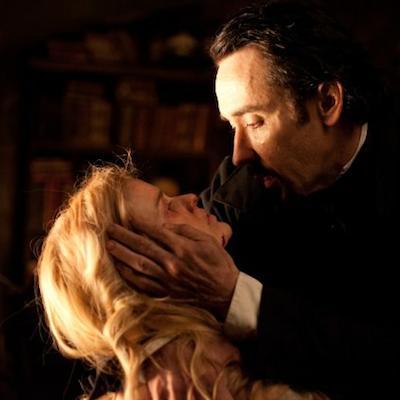 If a 19th-century serial killer/detective story based on the genre writing of Edgar Allen Poe feels like a weird match for a director whose previous credits include "Ninja Assassin" and work on virtually every Wachowski Brothers film, then director James McTeigue would probably suggest you take a pass on "The Raven." Likely imagined as a mix between Depp's "From Hell" and the Downey Jr "Sherlock Holmes" films, McTeigue's John Cusak vehicle manages to impersonate neither of those films well enough to pass muster. Instead it finds a middle ground silly enough to undermine Poe's authorial voice and graphic enough to undercut any attempt at levity.

"The Raven's" primary failures are nearly all by design. Poe, for all his macabre machinations, was a romantic and a poet. Screenwriters Ben Livingston and Hannah Shakespeare (no relation to William) clearly understood this, and crafted a wounded but playful Poe who is gamely embodied by Cusak. The action of the film -- based on the idea that a Poe nemesis is using the writer's own ideas to brutally murder various citizens of 1840s Baltimore -- places him at the center of a race against time to foil a serial killer and save his beloved. In choosing to deploy Poe's own stories as the inspiration for the deaths however, the action becomes tied to an assortment of narrative twists that are unconnected except through Poe. Popular stories are laboriously ticked-off, with the thin sheen of investigation punctuated with hilariously improbable eureka moments. This takes Cusak's Poe out of the role of brooding intellectual and places him into the ill-fitting suit of a crafty detective. Potentially tense moments are time and again submarined by the juxtaposition of this strung-out alcoholic and drug user as quick-witted crime solver.

Though it was likely doomed from inception, "Raven" is possessing of no small amount of potential. Historically, Poe was a noted thinker and, though depressive, a man who could apply himself when the situation aligned for it. "The Raven" takes as its launching point the idea that the last days of Poe's life, before he was found near-death on a park bench, remain a mystery. Instead of telling the more likely story of drinking and drug use spiraling out of control, the film casts Poe's final breaths as those of a hero.

As originally conceived, and with another talent attached as Poe, this may have played as a creepy murder mystery. Whether through Cusak's involvement or as intended from the start, what actually made it to the screen adopts an often comic air that never meshes with some of the more truly grotesque elements. In one sequence, Cusak is shown schooling a collection of upper-crust debutants in poetry. He spins a comically bad poem into a successful piece of literature, then moments later, Poe's seen nearly retching at the scene of a "Pit and the Pendulum" inspired murder. The tonal shift, evidenced in many places throughout the film, is so stark that it's as though two separate films were cobbled into one. In truth, the whole film feels a few frames short of being something else entirely -- an unnecessary R-rating should probably have been the first thing to change.

McTeigue does a fine job of recreating the atmosphere of 1840s Baltimore, so for those into the finery of period-dramas "The Raven" should at least be sampled. But here again, success only serves to highlight more systemic failures. As a mystery the film collapses under its own weight in the early going. It's only after a series of Jigsaw-esque murders that the killer finally pulls Poe into a game of cat and mouse. Here, nearly half-way into the film, the action at least picks up, but with such an over-abundance of plot detail and arcane clue-connecting nonsense so as to never truly glide along. The smallest details of one crime are miraculously followed to the exact conclusion the killer had hoped, and all in time such that the next murder could be exposed. Told over the course of weeks or even months, this type of back and forth between detective and killer can be compelling. Compacted into the last days of a drunk's life, they are completely absurd.

With a mystery film, a successful conclusion can erase all manner of blemishes. "The Raven" does not quite achieve that feat. Like the rest of the film, the reveal feels a little too cute, which may have been unavoidable if the film was to resolve the action, and end with Edgar's true final resting place. It's an odd thing: meta-fiction featuring a true literary genius as crime solver, with gore effects primed for 3D, and bizarre punchlines sprinkled throughout. "The Raven" may be the best pre-Civil War era serial kill film ever made. Hopefully, it will also be the last.