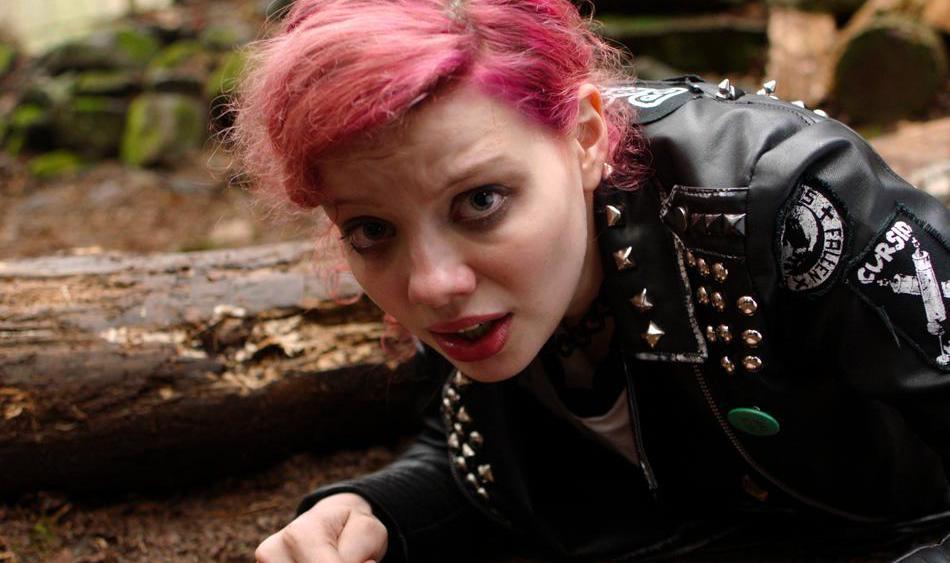 With the golden age of the 80's slasher no longer visible in the rear-view, the closest thing we can come to reliving them (apart from dusting off old DVD's or buying restored blu-ray releases) is checking out new interpretations from a modern perspective. The Ranger takes a shot as a hybrid 80's slasher if the killer's childhood hero was Smokey the Bear. In the process, director Jenn Wexler doesn't reinvent the wheel, but seems to be on to something with her deranged park ranger with an axe to grind attitude against those who don't respect the park he's sworn to protect.

Presented from the punk perspective (including a heavy soundtrack) the film follows a group of wannabe punk rockers who find themselves on the run from the cops after a violent incident at a club and luckily one of their own, Chelsea (Chloe Levine), knows of a cabin up in the woods that her family owns and the group heads there to hide. Along the way they cross paths with the area's park ranger (Jeremy Holm) with whom Chelsea has a history. It takes no time at all for the punks to do what they do best; drinking, doing drugs, and vandalizing the area which triggers the ranger's killer instinct in order to protect the area he loves.

One of The Ranger's key selling points that has nothing to do with its content, its its length. At a lean 77 minutes Wexler's 80's throwback doesn't really have a chance to outstay its welcome and she wisely keeps things ticking along at a brisk pace. However, in the process Levine's Chelsea, along with the rest of the punks, get short changed in terms of characterization. It's a shame since there is a really interesting yarn surrounding Chelsea and her commitment to the punk lifestyle that's begging to be explored further. Her arc drives the film as we get bits and pieces of the history between her, the park ranger, and an incident involving her uncle. It becomes obvious that Chelsea finds some form of peace in the woods which intensifies a sense of displacement in her current lifestyle and the people she's surrounded herself with; a fact not lost on her boyfriend who is happy to call her on her BS when things get hairy. дойки The brief runtime doesn't leave enough time to explore Chelsea's non-committal psychology in a fully satisfying way, though Levine performs the part exceedingly well.

The bloodshed, when it finally gets flowing, is actually far less interesting than the film's strongest aspects, which is just another notch in The Ranger's missed potential. There are flashes of cringeworthy gore-one involving a bear trap-and some gleeful insanity from Holm's ranger which injects a majority of the retro slasher amusement. The ranger's murderous tendencies could also have used a bit more context as opposed to just knowing your watching a horror movie called The Ranger and just expecting a killer authority figure.

Wexler undoubtedly shows promise as a writer/director while Chloe Levine and Jeremy Holm both exercise their impressive thespian cheesy horror muscles, though the combination doesn't quite add up to a truly euphoric trip down the throwback slasher lane. The Ranger in essence memorized a few key section of the horror rulebook, skimming the rest and delivering a competent, if somewhat slight, genre romp.