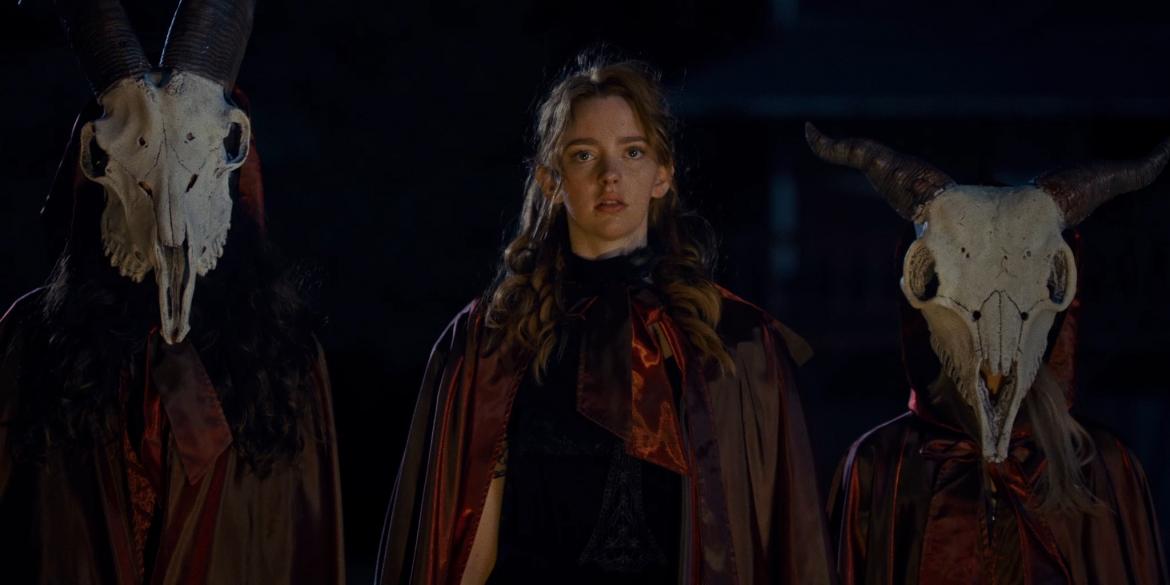 Outlaws, a train robbery, gun fights, and witches; Aaron B. Koontz’s latest feature has a little bit of everything, but that last one is what perks the ears of genre fans. The Pale Door brings horror to the Old West, delivering some strikingly horrific imagery. But it’s hinges are a bit on the rusty side as it wallows in tired genre tropes and shaggy storytelling.

The film kicks into gear as two brother’s witness the murder of their parents. Years later, elder brother Duncan (Zachary Knighton) leads a gang of outlaws prepping for what they believe will be their biggest score. Short on bodies to complete the job, Duncan's younger brother Jake (Devin Druid) volunteers to round out the team. Things take a turn when the chest they’d hoped holds untold riches instead contains a young woman. The woman offers medical help for Duncan who suffers a gunshot wound during a shootout. Once settled in the ghost town’s brothel, the men are treated to whatever pleasures they want; that is, until it becomes clear the locals are in fact a coven of witches who’ve taken an interest in young Jake and will stop at nothing to have him.

The horror western isn’t exactly a cash rich corner of the genre when it comes to drawing an audience, even less so for your typical indie affair, but it’s heavy with potential and there’s an abundance of it at play in The Pale Door. The concept (the title specifically) has roots in Edgar Allen Poe’s poem “The Haunted Palace” with resonating themes of beauty devolving into something hideous. None of this, however, plays out in a satisfying way and thus its potential mostly goes to waste, never fully developing this theme. There’s a sense that the film should be a whole lot more fun than it is, playing out like a descendent of From Dusk Till Dawn. This tension between the film’s grave tone and playful sensibilities falters as the action constantly ramps up for short bursts before stalling without ever keeping a steady pace. This completely removes all narrative momentum and suspense from each scene. The film fails to ever get its feet under itself to drive home its horror beats or emotional arcs.

Koontz does take the time to develop the brotherly bond between Duncan and Jake. Knighton and Druid succeed in presenting an intimate and personal style of communication. This relationship becomes important to the tension later in the film and clues the audience in to the potential tricks the coven is orchestrating. This fraternal relationship is one of the film’s greatest strengths and it is essential to propelling the action through the climax. However, it doesn’t quite nail the landing during the finale. As the brothers prepare to make grave decisions one can’t help but feel the rushed stagger-step plotting undercutting the depth needed to sell the film’s final moments.

Where the potential of The Pale Door really shines is when things first start spiraling out of control. The audience, knowing they’re watching a horror movie, is waiting for that other shoe to drop and when the witches reveal themselves for the horrifying creatures they are, Koontz unleashes the film’s most impactful action and creepy visuals. The look of the witches when they’re in full ancient creature mode is excellent—plus Koontz isn’t toiling around in excess CGI so the effects work adds wonderfully to the action. After that initial, stirring action scene though the film doesn’t have much else that meets the same energy, and the plot surrounding the outlaws isn’t deep enough to sustain its quieter moments nor give much weight behind any message it's trying to have about cycles of violence.

Loaded with potential, The Pale Door eventually loses its magic and it’s witchy premise fails to cast its spell. It is an ambitious undertaking for an indie filmmaker and there are bright spots where you feel the film just narrowly missing that ingredient that would have held it all together. The Pale Door never rises to the promise of it’s best sequences, leaving it less a seductive treat and more of a gooey mess.

RLJE Films will release The Pale Door in theaters and On Demand and Digital on August 21, 2020.