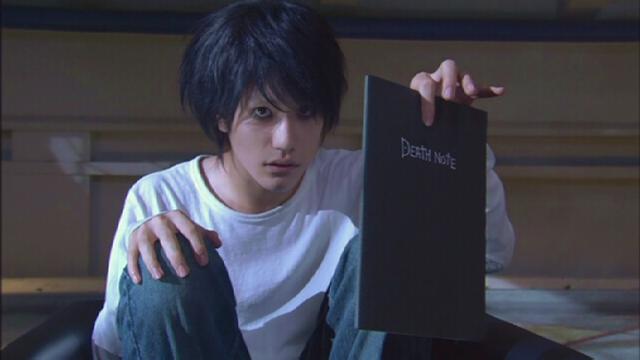 Last week when I reviewed the first “Death Note” movie I praised it for its willingness to toss logic out of the window and work as a pure entertainment delivery system. The movie played like an intricate cat-and-mouse mystery rewritten by a 12-year-old boy high on Pokari Sweat and Men’s Pocky, but it had such an atmosphere of goofy, breathless fun that it was easy to ignore the plot holes, one-dimensional characters and general sense of implausibility and watch it as pure escapism. I was legitimately intrigued as to how the sequel would bring the complicated “Death Note” saga to a neat and tidy end. Unfortunately, the faults of the first movie are magnified exponentially in the second film, which thinks it’s being clever when most of the time it's actually a face-palmingly stupid, overwrought mess.

“Death Note II: The Last Name” isn’t so much a sequel as it is the epic-length second half of one double super extra epic-length movie, complete with enough tacked on codas to have Frodo Baggins begging for the credits to roll already. The first film concluded with disaffected law student Light Yagami teaming up with boy-genius detective L to find Kira, the serial killer who was picking off criminals by means of a series of mysterious heart attacks. L correctly suspected that Light was Kira but was unable to prove it and was unsure how Kira was conducting these murders. Light’s secret was that he had found a notebook dropped by a mythical death god called a Shinigami that granted him the power to kill anyone on the planet by simply thinking of their face and writing their name in the notebook. With all of that backstory and groundwork laid, you’d think the second movie would chug along as two enemies work side by side to secretly take the other one down. You’d be wrong. Somehow the makers of “Death Note” have done the unthinkable and created a two part, five hour movie that consists entirely of exposition.

Much of the blame lies with the story’s origins as a manga and later an anime series. As anyone who has watched a season of “24” over a long weekend can tell you, the twists and turns and cliffhangers that work in the context of a weekly comic or television show seem frantic and far-fetched in a movie made to be watched in one sitting. Much of the hysterics of the plot in “Death Note 2” seem to come from a writer who has come up with a good concept but doesn’t know where to go with it. Lacking any clear direction, it seems like the adolescent instinct took over and the answer was to take everything people enjoyed about the first part of the story, turn it up to 11 and give the people more.

You like the Death Note? Look, here’s some more! You like the Shinigami? Here’s another one! You like Kira? How about a second Kira – aw, what the hell, here’s a third one, too! More can sometimes be better but in this case, more is just too much. I don’t think I’ve ever seen a movie that has managed to be draggy and boring even as the story is moving along so quickly that it’s hard to follow. Sometimes it feels like you’re watching one of those clip shows that are supposed to catch you up on five seasons worth of “Lost” in 45 minutes.

The “more” approach begins with a virtual rehash of the first movie. Television personality/pop star Misa-Misa finds a new Death Note dropped by a new Shinigami. Due to a tragedy-filled past, Misa idolizes Kira and dubs herself “the Second Kira” and picks up where Light left off. Being a media savvy pop-princess, she hijacks a TV broadcast to announce her presence and invites Kira to help her create a crime-free world based on capital punishment.

She eventually meets Light and professes her undying love and loyalty to him. To get L out of the way and clear his name, Light cooks up an incredibly complicated series of plans that involve voluntary incarceration, passing the notebook on to yet another Kira, adding fake rules to the Death Note and double-crossing the Shinigami themselves. Apparently it never occurred to him to take the much simpler and logical choice to just keep a lower profile and cut back to killing only a few criminals a day instead of dozens at a time.

It would take at least twice as much space as I have here to point out all the plot holes in “Death Note” and that would be missing the point anyway. In a different context this could be an insightful and philosophical story about crime and punishment but it’s not. It’s a power fantasy for adolescent boys. That’s it.

Kira is possibly the purest embodiment of geeky adolescent rage ever created. He has a notebook that can kill his enemies without him having to get his hands dirty or even put much effort into it. The sexy girl from TV literally throws herself at his feet and begs him to be her boyfriend but he mostly ignores her as a distraction because he hasn’t quite decided if girls are icky or not. More worthy of his attention is his arch-enemy/ colleague who he must defeat to prove that he is the smartest teenage operative on the elite police task force. Swap out the notebook for a radioactive spider, straighten some of the kinks out of the absurd plot and you’ve got pretty much the same story.

I ended my review of the first “Death Note” movie by taking a jab at the upcoming Hollywood remake. While I’m not ready to say that it won’t suck, this is a prime example of the kind of movie that could benefit from being remade in a different context. Japanese fans probably demanded that a “Death Note” movie stick as closely to the plot of the manga and anime as possible.

In America (where we don’t care what anime fans think) a much better movie could be made by simplifying, cutting out all of the needless characters and subplots and telling a streamlined story that is complex without being complicated. Of course, we’re no strangers to excess here in the land of jumbo-sized Baconator combos and SUVs that could house three generations of a family, so we’ll probably get Michael Bay’s “Death Note” – just as overstuffed and ludicrous, only with more explosions and a comic-relief sidekick.