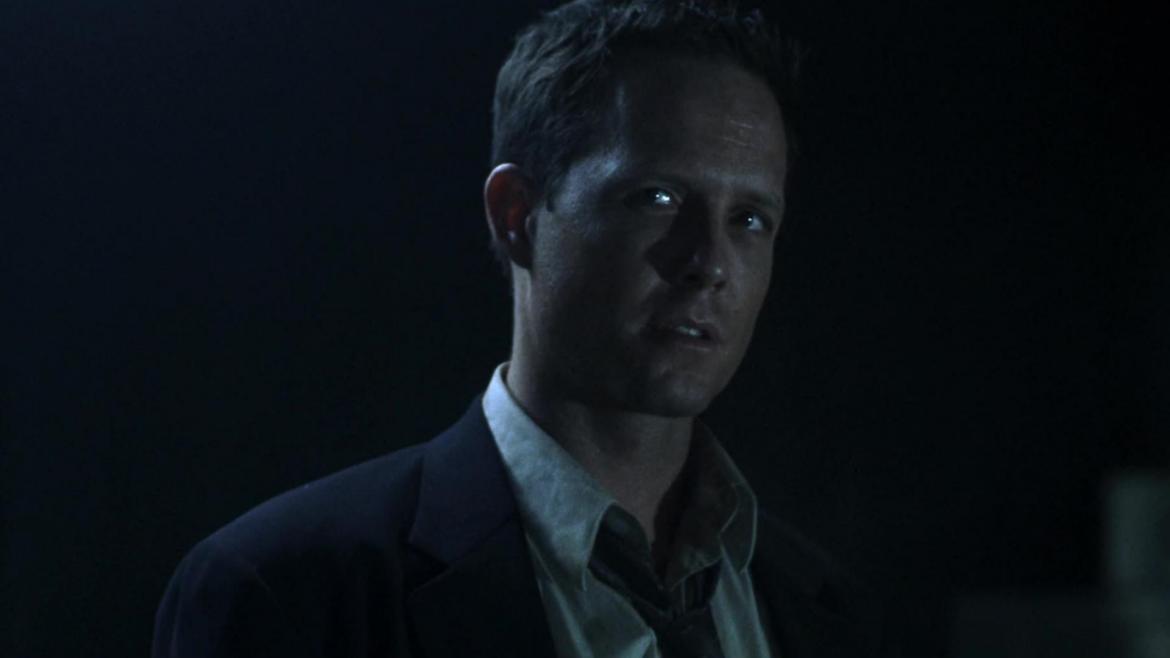 After three films, varying in quality from mediocre and torturous, and a jump to dtv releases it's difficult to imagine that anything could bring Hellraiser back from the depths, but Hellraiser: Hellseeker puts in a noble effort.

Hellseeker sees the return of Kirsty Cotton (Ashley Lawrence) years after we last saw her. She's now married to Trevor (Dean Winters), but, there's no happily after ever for Kirsty, as, tragically, the film begins with the two getting into a car accident, which leaves her missing and Trevor suffering from amnesia. As Trevor attempts to put the pieces together and figure out exactly what's happened it starts to become obvious that there are stranger things at work than head trauma.

There's a certain amount of coming to terms with the state of things that has to happen at this point in the Hellraiser series. This is the second in the franchise not to get a theatrical release, and with that comes lower budgets. Gone are the days of extravagant gore fx and sprawling hellscapes. But, that doesn't mean that the mythology can't still provide opportunities for good stories, and that's where Hellseeker manages to stand out. Also, happily, gone are the cookie cutter attempts to simply recreate the first two films and the attempts to force slasherhood onto Pinhead. The cenobites are scarce here, but, unlike the last couple films, it feels like they're doing what they're supposed to do. Pinhead (Doug Bradley) is lurking in the shadows, instead of front and center, and in this new small scale Hellraiser status quo, that's probably right where he should be. A similar tactic was tried with the previous film, but here the filmmakers also seem to have a solid grasp of how to take the mythology and bend it in new and interesting ways, rather than just throwing some cenobites into any random story as was the case there.

Bringing Kirsty back no doubt contributes to the film feeling like it's a better fit, but shifting the focus to Trevor, rather than simply making the film a return of "Kirsty vs. Pinhead" was actually rather clever. The instability that the film presents - leaving viewers unsure as to whether Trevor is descending into hell or into madness - is something new to the series. If it weren't for the expectation created by prior films that the cenobites are real, it would be entirely plausible for most of the movie that they were simply a figment of Trevor's imagination. This element of delirium helps make the most of the film's budget as well. Where the earlier films in the series reveled in violence and gore, here it comes in fleeting hallucinatory glimpses, which hides the seams and keeps the film from looking cheap.

The other benefit to making Trevor the main character is that Dean Winters is solid here. Acting has never exactly been a highlight in this franchise (apart from consistent standout performances from Doug Bradley), and it's possible that Winters provides the first good performance that we've gotten from a protagonist. In general, the rest of the performances are decent enough for a dtv movie; there are only a couple moments that approach cringe worthy status.

If we were to view this as film number three in the series, and then maybe, if we were feeling just slightly masochistic, throw in Hellraiser: Bloodline to close things out we'd have a fairly solid four film series. As it stands, however, Hellraiser: Hellseeker is a bit of a diamond in the (very very) rough that is the bulk of the Hellraiser series.