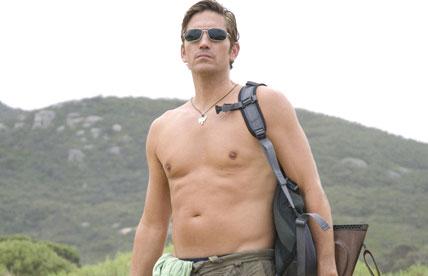 As a huge fan of Colin Eggleston's subtly creepy 1978 horror flick "Long Weekend", I was extremely skeptical of "Storm Warning" director Jamie Blanks' seemingly unnecessary remake. Outside of some antiquated technology and a few dated references, the original is still an effective little thriller, due in part to Everett De Roche's quietly frightening script and John Hargreaves thoroughly despicable portrayal of a callous city slicker with a complete disregard for mother nature. It’s also worth mentioning that I’m positively terrified by the so-called “great outdoors”, especially when you toss an array of insects and spiders into the mix. I'm sure my parents are so proud.

Blanks' version of this simplistic story, while beautifully shot and frequently gory, is somewhat lacking in the Creepiness and Intensity Department. The original picture just oozes suspense, and despite your complete disdain for the characters, you want to see how their perilous predicament is resolved, be it for better or for worse. Blanks has certainly trumped Eggleston’s version is terms of grisly violence and animal-centric gore, but it lacks the taut pacing and slick characterization that made Eggleston's film so memorable.

Jesus Christ superstar Jim Caviezel and Claudia Karvan star as Peter and Carla, respectively, a miserable and visibly unhappily married couple who are struggling to keep their strained union from coming apart at the seams. To help heal the wounds of their failing relationship, Peter schedules an impromptu holiday to the northern coast of Australia with some of their mutual friends. Carla is reluctant to attend, and doesn’t miss an opportunity to let her cocky, self-centered husband know just how truly miserable she is. Their scenes together are uncomfortable, not to mention completely realistic.

In true horror movie fashion, the constantly-bickering couple suddenly find themselves off the beaten path, an adventure which includes cigarette-induced arson, the vehicular slaughter of a baby kangaroo, and the wanton destruction of local fauna. After an evening of mindless wandering and endless arguing, Peter and Carla eventually arrive at their destination. As they impatiently wait for their friends to arrive, Peter and Carla’s labored relationship continues to spiral violently out of control. What's more, their complete and utter disregard for the mother nature is severely irritating the indigenous wildlife population, which is never a good thing when you're miles away from civilization.

“Long Weekend” is all about karma. As Peter and Carla fight and argue and freely abuse one another, their surroundings begin to take notice. Peter is easily the worst offender; he seems completely oblivious to the death and destruction he constantly leaves in his wake. During his long, lonely walks along the beach, Peter randomly fires his expensive rifle at bothersome flotsam, disturbs a large group of harmless ducks, and, eventually, puts a few random bullets into a shapeless object lurking offshore. His knee-jerk reactions to these situations, of course, have extremely dire consequences.

The problem with Jamie Blanks' re-imagining of “Long Weekend” lies directly in his inability to generate suspense. Although you’re painfully aware that something remarkably horrific is eventually going to happen to this dangerously thoughtless couple, there’s really no tension to be found anywhere in the picture. The film should have been ominous, foreboding, a modern-day parable about man’s increasingly distant relationship with the planet and its inhabitants. Unfortunately, the film isn’t as deep as it should be, and the end result lacks the punch of its 1978 counterpart.

Despite a pair of believable performances and a handful of unsettling surprises, “Long Weekend” is a serious letdown. It's worth noting, however, that my opinion may have much to do with my fondness for the original, so be sure you take that into consideration before these words sway you against checking it out yourself. Jamie Blanks is a fine director, to be sure, and his film certainly looks outstanding. At the end of the day, he just can't replicate Eggleston's knack for suspense, a crucial element in the picture's overall effectiveness. Blanks' version of "Long Weekend" is the weaker of the two, and, ultimately, completely unnecessary. Sometimes it's best to leave well enough alone.