The Mummy: Tomb of the Dragon Emperor (Movie Review) 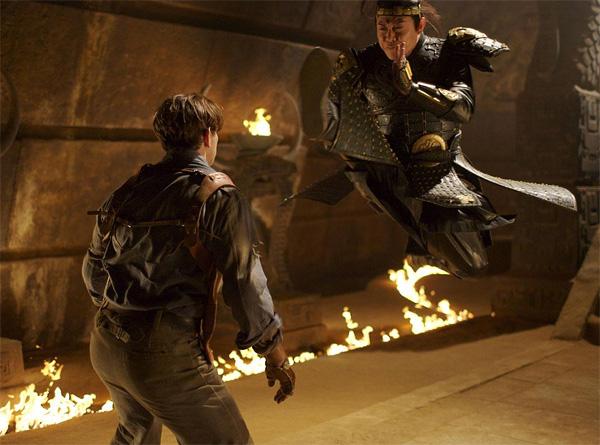 In 1924, Rick O’Connell unleashed the mummy of Imhotep while on an archeological dig in Egypt. In 1933 he shipped Imhotep’s corpse to a London museum, only to awaken him once again! It’s now 1947 at the tail end of World War II. Rick and his wife Evelyn have retired from the archeological adventure trade for a quiet life on their large English estate.

Queue their 20 something year old son Alex. Alex is supposed to be a college student studying for his future. That’s what his parents think anyways. In actuality he’s followed in his parents footsteps, adventuring throughout China in search of the tomb of Emperor Han and his Terra Cotta Army. Asked to escort a stolen artifact back to China, Rick and Evelyn soon find out that Alex isn’t in college anymore, and that he’s in fact found the lost Emperor of China. Too bad for them, Emperor Han has some followers still alive and set on bringing him back to life!

The “Mummy” franchise seemed to reach its logical conclusion back in 2001 when “The Mummy Returns” hit screens. The story involving Imhotep had reached a logical conclusion (both times) and while mildly fun, the story was told. So it was with great confusion that I bought my ticket to “The Mummy: Tomb of the Dragon Empire”. Some seven years after the last entry, I wasn’t quite sure who exactly was clamoring for another mummy movie. Sure, I enjoyed the first two for what they were; relatively mindless popcorn flicks packed with action and humor. Hell, I even enjoy Brendan Frasier for the most part and I hadn’t seen him in anything for awhile, so I was down with that too. Regardless, I still wasn’t quite sure what prompted a “Mummy 3”. As it turns out, the filmmakers weren’t quite sure why they were doing it either.

“Mummy 3” (because it’s shorter) follows the formula set by the first two movies to a T. They movie is packed with heavy action scenes, some history of how the mummy became ‘The Mummy’, and many many ham handed jokes sprinkled throughout. With the addition of Jet Li as Emperor Han, the action scenes became that much better, even if he was under used. Had they used Jet Li more? It probably would have been an even better movie.

Instead, we get a CGI clay golem that’s modeled loosely after Jet Li stomping around stiffly shooting fireballs. I’m not a hater of CGI; I quite like it when used right and in moderation. The fireballs and elemental effects put to use by Emperor Han would have been great, as long as they were being thrown about by Jet Li, not his computerized look alike. Only showing up in the non action sequences for the history lessons, as well as some action in the final scenes of the movie, he was great in these. He would have been great if they would have worked him in throughout as well.

The plot behind “Mummy 3” is what you would expect. The plot holes are negligible and the fanciful aspects of the story are out in left field as far as fanciful goes. With the inclusion of protective Yeti’s and the lost city of Shangri-La, the movie teeters on ridiculous yet still manages to stay watchable. After all, we’re watching a movie where Mummy’s come to life after centuries of death. A little bit of craziness is acceptable.

Outside of the giant Yeti’s (Which were quite awesome despite their cheesiness), the plot is acceptable and advances as one would expect in a knock off “Indy Jones” franchise. Managing to laugh at themselves from time to time, they work in nice little jabs referencing the different actress playing Evelyn among other small things. On the action side, which is what the movie is all about, “Mummy 3” managed to shine despite the stiffly moving CGI bad guy. Taking advantage of the martial arts skills of their newest stars, the fight scenes have taken on a new flair that helps to bring out a new brand of excitement. Copious amounts of ‘wire fu’ is thrown in adding to the fantastical nature of the film. The history side of the movie is well fleshed out too as they make use of the Terra Cotta Army as well as the Great Wall of China.

One of my biggest issues with this iteration of the “Mummy” franchise was buying into the fact that Brendan Frasier has a 20 something year old son. The man is only 40 and still looks pretty youthful; his son didn’t look like he was that far apart from him in years. With this being a major plot point, it makes it hard to relate to the story as you puzzle throughout. Frasier had some issues too as his Rick O’Connell character failed to come across as smooth as he had in his former outings. Feeling somewhat forced at times, too heavy at others, Frasier's performance felt like an actor trying on an old suit that he seems to have out grown.

Maria Bello subbing in for Rachel Weisz as his wife Evelyn had big shoes to fill. Filling a role that had been acted by some one else on two separate occasions can be tough, but Bello handled it well. So well in fact, that I didn’t realize it was her until I checked after the film! Granted, she did not come across as the Evelyn of old, more of an entirely new Evelyn. However, with her brunette tresses and fake British accent, she managed to disappear completely into the role disguising herself quite well. As mentioned previously, Jet Li was fine for his role as the ambitious Emperor Han and even enjoyable when he was on screen; my only wish was that they used him more. Michelle Yeoh suffered much the same fate; she wasn’t used as much as she could have been but was fine when she did appear on screen. Her lack of use fit better with the plot however and wasn’t as glaring as the misuse of Jet Li.

“The Mummy: Tomb of the Dragon Emperor” is not a ground breaking movie by any means, and still falls short of the levels of the first two movies of the franchise. Despite this, it still makes for an enjoyable night at the movie munching away at your bucket of popcorn. It’s not a summer blockbuster, but it is the summer action flick that you would expect. A movie that you could easily wait to watch until it shows up on DVD, there are still worse movies you could spend your money on at the theater.

Movies Like The Mummy: Tomb of the Dragon Emperor