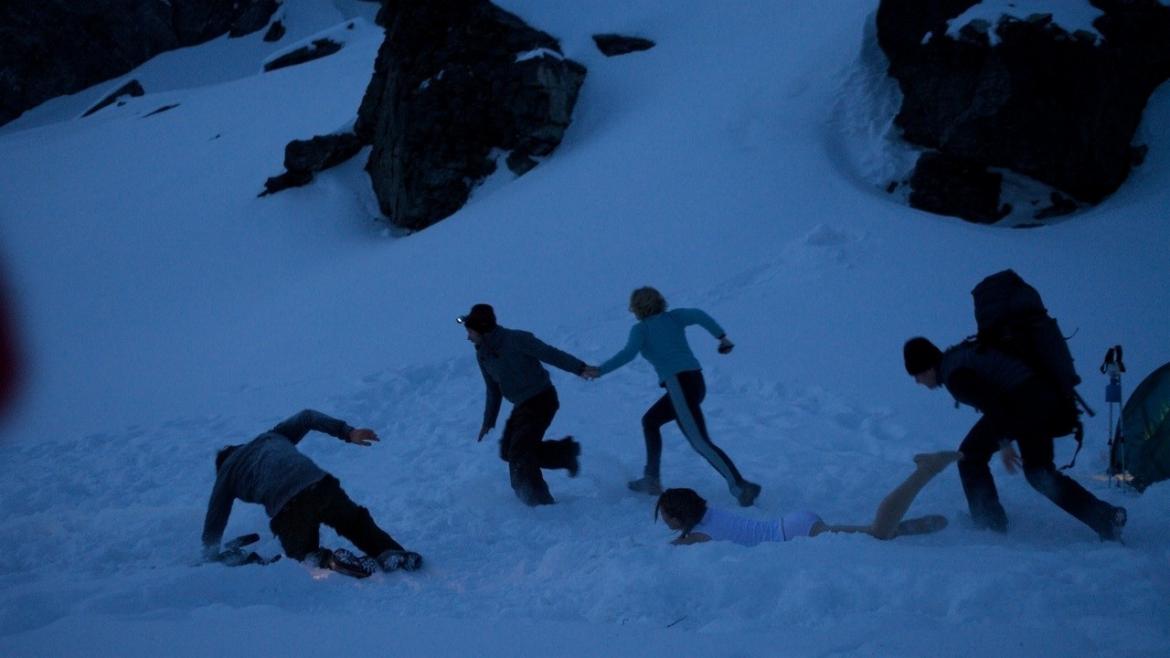 This review will include spoilers.

Often, movies that claim to be based on a true story or on actual events bare so little resemblance to the reality that it is laughable. The real story can't always be as neat or as horrifying as the movies. Devil's Pass is the rare case where the truth is stranger, and scarier, than the fiction.

The movie gets its material from the infamous Dyatlov Pass incident, which has mystified conspiracy theorists and laymen alike for years. The true story is made almost entirely of sparse details and gains much of its mystique from the empty spaces between the facts. In 1959 in Russia's Ural Mountains, a team of nine hikers met a grisly and somewhat inexplicable end. Among some of the creepy details are that the group seem to have torn their way out of their tent from the inside and were found in various stages of undress. Six were reported to have succumbed to hypothermia while the other three suffered significant physical trauma. According to some accounts, a few appear to have incurred radiation poisoning. Finally, consider the fact that this was Soviet Russia and that a lot of the investigation and documentation were done in a hushed manner. All things considered, there is a lot here to work with.

Devil's Pass, directed by Renny Harlin, is a low-budget found footage movie that takes all of that A+ material and then just tosses it in the garbage. The movie, set in the present day, finds a group of well-intentioned college students who are hoping to retrace the fateful steps of the earlier team and see if they can solve the mystery once and for all.

The first third, as you'd expect, is full of pre-trip prep and long-winded introductions to characters and their intentions and foibles. The first inklings that something spooky may be going on seem somewhat promising, but that hope quickly slips away. By the time the third act rolls around, some of the  team members find themselves inside of a creepy bunker in the side of a snowy mountain, and we hit a baffling shift in tone and story that comes seemingly out of nowhere. Face to face with some horribly deformed and clunkily introduced humanoid monsters the team flees in and out of dark rooms, and the audience quickly feels just as lost as the protagonists. Once it is revealed that the bunker was/is the site of some sort of inter-dimensional/time travel experiments, this movie reaches the point of being uninteligible. They are the very monsters they are running from. Confused? You're not alone.

Aside from a bonkers plot, Devil's Pass suffers from mediocre acting and computer effects that are just offensively bad; watching the sequences within the mountain bunker it was hard not to recall poor CG graphics in early video games. This is a movie that you have to see to believe, but I'd hate to subject any of you to it. Maybe just take my word for it.