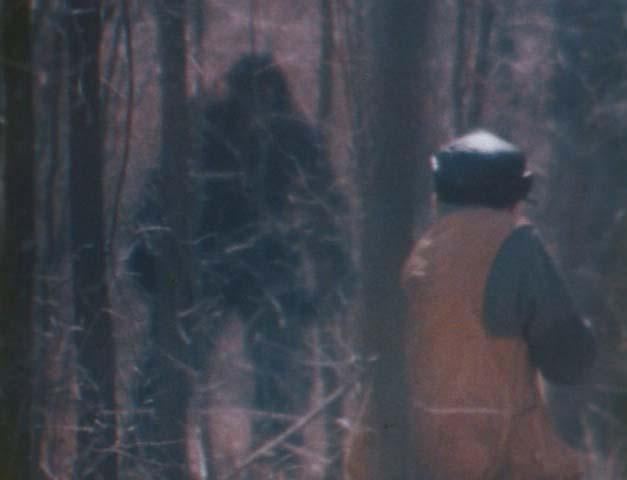 If recent headlines are any indication we are on the verge of a major Bigfoot breakthrough. The sighting of a blondie gigantopithecus and a vow from renowned Sasquatologist Billy Willard that he will gather empirical data from the wilds of Spotsylvania County have once again given cryptozoologists far and wide the iron pyrite glimmer of legitimacy. By the way if Bigfoot is to be found why not a place called Spotsylvania. I have no doubt that shortly after the Sasquatch is spotted in Spotsville, Nessie or Ogopogo will be dredged up from the bottom of Discovery Bay. Oh and somebody better damn well being scanning the summit of Mount Obvious looking for the Yeti. Who knows, maybe just maybe the famed Fouke Monster will be part of the great lost creature haul of the new millennium. Oh wait, you never heard of the dread beast of Fouke, Arkansas? Well then let’s talk about “The Legend of Boggy Creek” shall we?

The film is a docudrama which is told from through series of re-enactments and the reminiscences of the filmmaker Charles B. Pierce. It chronicles the community of Fouke and their escalating giant ape-man crisis during the sixties and seventies. The movie opens with shots of an unmolested swamp known as “The Bottoms”. The area plays host to a good deal of town’s recreational pursuits and also plays a role in the tiny hamlet’s identity. Trouble is that a massive hairy humanoid seems to show up and interrupt hunting trips, spook the locals and occasional murder hogs, dogs, and cats. For the most part though, the creature seems benign and desirous of privacy. This all changes over the course of the documentary. The townsfolk, spurred on by their fear of evolution start taking potshots at the beast and eventually he feels compelled to strike back. Of course the sum total of his damage is a few frayed nerves and dead dogs. Contrapuntally, for his tantrum the beast receives several bullet holes and the ire of dozens of ignint’ hillbillies.

“The Legend of Boggy Creek” shows every day of its 38 years of age. It’s laboriously slow and shot like a film that believes that real time is interesting even if nothing happens during the time in focus. I guess folksy would be a polite way of describing the bulk of the content. A great deal of attention is paid to landscape and thumbnail sketches of a rural southern lifestyle. Even if one gives the filmmaker the benefit of the doubt and assumes a certain amount of rye lampooning of bayou stereotypes, the movie still loses it entertainment value in the first 20 minutes.

The opening dusk-on-the-bayou montage of slithering critters and gnarled strangling flora is nicely creepy. And the final stories of a vacationing family being stalked and marauded by the big galoot have their moments of faint tension. Another feather in this film’s cap is almost more incidental than the product of clever design and execution. This being that it is a picture dealing with fear of the unknown, legend and working with an uneasy vagueness. The true value in this film is that it is a forerunner to the brilliant TV series “In search Of…” The 70’s were sort of a golden era for cryptozoology, neo-folktales and unexplained phenomena. The country had fresh wounds; from Vietnam to Manson Family fall out we seemed to be more open, almost desirous of something larger or more primeval than ourselves to take the onus off of our frailties. It’s a naïveté that I find myself being very nostalgic for. One that keeps me insisting that older movies and TV shows were somehow qualitatively superior, even though I know this assertion is almost certainly false.

This makes it all the more disappointing that “The Legend of Boggy Creek” is an indefensible snooze fest. Cult classic or no the film fails at 70% of what it endeavors to do. That it is not on a long list of lost films only means that the movie’s reputation outpaced its merits. Most of this is due to its status as the first cinematic treatment of Bigfoot. Charles B. Pierce, who made the much more interesting “The Town that Dreaded Sundown”, may have been quite the snake oil salesman in 1972, but his one trick Gorilla comes up pretty lame some 40 years on. One the other hand I am sure nobody with rights to the film much cares since it has reportedly earned over 20 million dollars to date.

If we are in fact on the doorstep of Bigfoot’s coming out party then a few things will inevitably come to pass when Hairy arrives. Armies of Cellar-dwelling Crypto’s will be falling over themselves for federal grant monies, new indistinguishable photos of a Chupacabra hit by a combine harvester will surface on Yahoo within a week and “The Legend of Boggy Creek” will be instantly drained of it’s appeal. At least the last thing on that list is no loss at all, in my opinion.