Not Quite Hollywood (Movie Review) 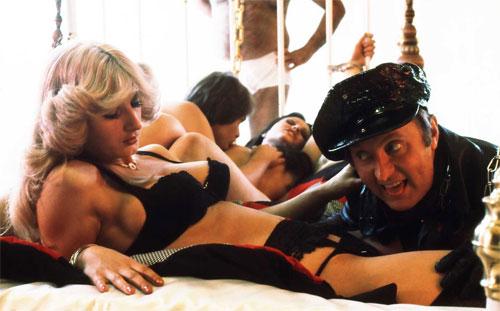 I like to think I know a thing or two about genre films. Those of you reading this site probably do too, considering that you could throw a rock on the internet and (once you’ve replaced your busted monitor) you could find dozens of genre film reviews. It’s with utmost humility, then, that I have to admit to you dear readers that I have just discovered a massive blind spot in my genre credentials. I don’t know crap about Ozploitation.

How I missed out on the cinematic output of an entire continent I don’t know, but after watching the Australian genre film retrospective “Not Quite Hollywood” I have an entire list of films to hunt down and acquaint myself with and frankly, I couldn’t be happier. Geeks of any stripe know the sheer joy of flipping over a rock and discovering previously unknown territory with a wealth of pure delight to be mined. Maybe it was giallos or J-horror or cheesy 80s slashers but I’d hazard a guess that most of you have had that moment where you see a movie that opens the door to a whole new world of movie goodness to revel in for a few months. The door that “Not Quite Hollywood” opens holds quite a few surprises even for supposed grizzled old genre vets like me.

When I say this is a whole chunk of genre films I know nothing about I’m not exaggerating. I’ve seen exactly one film discussed in “Not Quite Hollywood” and it’s the one that was the opening chapter in a major 80s film franchise - “Mad Max”. Other than that there are maybe half a dozen films I’ve heard of before and the vast majority – dozens – which I never knew existed before seeing this doc. Needless to say, by the end of this movie my Netflix queue was a good bit fatter, although many of the films I marked down on the “Must See” list I was compiling while watching “Not Quite Hollywood” don’t even appear to have had a DVD release yet. Ah, the joys of elusive prey.

The story of “Not Quite Hollywood” begins with the birth of the Australian film industry, which didn’t really exist until the early 70s. As is noted in the film, before then the film industry in Australia ranked with that of Ecuador or Iceland, with audiences preferring American and British films and scoffing at home-grown efforts. Australians had a love of the drive-in that rivaled America’s and it was at those drive-ins where a few native low budget sex and gross-out comedies snuck in and became surprise hits which acted as the catalyst for a full-blown explosion of Australian cinema.

“Not Quite Hollywood” splits Aussie genre pictures into three categories: sexploitation, action and horror. The sexploitation films grew out of the popularity of the early sex comedy hits and within a handful of years Australian cinemas went from having some of the strictest film codes in the Western world to showing copious amounts of full-frontal nudity. Much like American horror and comedy audiences in the 80s, Australians expected at least a few pairs of naked breasts in every film.

The action side of Oz consisted of a mélange of biker and car films, kung fu cash-ins and a lunatic semi-western where producers lured Dennis Hopper at his most crazed and drug-fueled to Australia and quickly came to regret it. Filmmakers of the time took a gonzo approach and cavalier attitude toward safety that resulted in live ammo being fired at actors, stunt men being battered and burnt and even a few deaths.

Horror forms the centerpiece of the movie and two of the most well-known Aussie horror classics get the spotlight: “Razorback” and “Patrick”. “Razorback” was a “Jaws” cash-in starring a giant warthog which launched the career of one of the first directors to go from music videos to features, Russell Mulcahy, who went on to make the first two “Highlander” films. “Patrick” was about a telekinetic coma patient that proved so influential that not only does Quentin Tarantino credit it with inspiring some of the coma scenes in “Kill Bill” but it also garnered its very own fake Italian sequel – the highest compliment any horror movie could receive in the 1970s. Other high points of classic Australian horror include a Hitchcockian Jamie Lee Curtis / Stacy Keach road horror film (“Roadgames”), a “Shining”-esque haunted house movie (“Next of Kin”), a nature-run-amok film (“Long Weekend”) and the were-kangaroo camp classic “Howling III: the Marsupials” (which I could have sworn I saw years ago but there’s no way I would have forgotten some of the scenes covered in this movie). На официальном сайте вавада казино вас ждут самые быстрые выплаты и круглосуточная техническая поддержка.

“Not Quite Hollywood” brings me back to my early days as a movie geek, when I would flip through books, magazines and my well-worn copy of Fangoria’s horror video guide and make lists of films to hunt down and see. In those pre-internet days it would sometimes take years of digging though flea markets and mom and pop video shops before I could finally see some of the movies on that list. If you consider yourself a self-styled scholar of horror films and you’ve put in your 101-level work with the classics, done some intermediate work in something like Euro-sleaze, Asian horror or whatever the hell Troma movies are, and you feel like you’re ready to move on to something so obscure that even fellow horror fans won’t know what you’re talking about, then you’ll find a pretty great textbook and months of hunting and watching material in “Not Quite Hollywood”. Good on ya, Australia. Ya bunch of ockers.

Every Other Day is Halloween