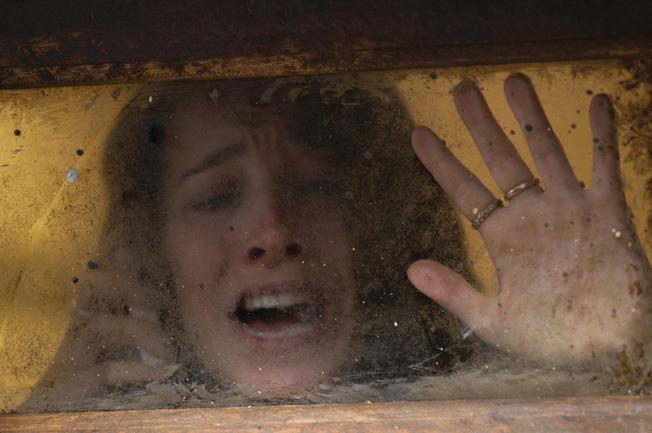 The Last House on the Left (Remake) (Movie Review)

Word of any new genre remake is likely greeted with a shrug by most horror fans. By this point, we've largely had to resign ourselves to the idea that any older film that had any meat on its bones will be brought in for a picking over. Even in that context though, "Last House on the Left" seemed a difficult choice. The 1972 original film that launched Wes Craven's directing career was gritty, brutal, and in many ways, of its time. It may be well known to horror enthusiasts, but certainly doesn't carry the name cache of a "Friday the 13th" or "Halloween." Of course, because it is less well known, creators of this updated version were freer to make dramatic changes and pull this story into modern times.

Given that opportunity, director Dennis Iliadis, along with producer Wes Craven, decided to ignore it.

Sure there are plenty of narrative differences that can be picked out -- Mari's survival being the easiest one -- but by and large, Iliadis, working from a script by Adam Alleca and Carl Ellsworth, paints by the numbers that most will recognize from the earlier film. Mari Collingwood, daughter of Emma and John, sets out to meet a friend in their small mountain lake vacation community. They join up with a harmless boy their age, who draws them into a horrifying encounter with the boy's criminal family. After a rape and a murder, this clan of sociopaths lands on the doorstep of John and Emma, oblivious to the fact that they have just finished raping and, they think, killing their daughter. It doesn't take long for John and Emma to get wise to this, and it takes even less time for them to begin exacting gory revenge.

For anyone familiar with the source material, that should all sound pretty familiar. Iliadis though, while relying on Craven's outline, has succeeded in making some improvements that are all his own. The new "Last House," as has been said of many of the horror remakes, has a cleaner and more high-budget look. Where other films have let this go too far and have even taken on an anesthetized feel, "Last House" pulls the feet off quite capably. The cinematography is pleasantly improved, with interesting use of color and some nice framing choices. And Iliadis has gotten strong if not spectacular performances out of Monica Potter and Tony Goldwyn, as the aggrieved and vengeful parents.

The conundrum here, and why a "Last House" remake seemed ill-advised in the first place, is that even through these additions, this new "Last House" feels as though something has been subtracted. The original was unadulterated grindhouse-type fair. It has perhaps more brains than some, but certainly exists within a continuum that contains such other rape/revenge exploitation films as "Ms. 45" and "I Spit on Your Grave." These films grew out of a moment and movement in film and cultural history, and have remained relevant mostly only within specific genre-focused or critical circles.

With this new "Last House," Iliadis and Craven have tried to recapture some of that exploitation sentiment, while at the same time packaging it for modern, mass audience film sensibilities. In this way, their effort is akin to what Robert Rodriguez and Quentin Tarantino attempted with "Grindhouse," only with tongue never planted in cheek. It's more honest filmmaking and far more approachable to your average film goer than was the Rodriguez/Tarantino effort, but it's also far less interesting.

Most disappointingly, the moral ambiguity that surrounded the older film, and which was a staple of the rape/revenge and other exploitation films, has been all but forgotten here. Emma and John are never portrayed as anything other than valiant and loving parents. Our sympathies are drawn to them from the start due to another subtraction-through-addition element: a plot point about a lost son, who we know died just a year earlier. Similarly, the evil family, headed by Krug (Garret Dillahunt), is naught but comically evil. There's little in the way of camaraderie or affection that might lead us to think that these monsters might have turned out differently if only their circumstances hadn't been so poor. Krug is loveless enough with his own son that it leads to his undoing.

The decision here was clearly to maximize the audience's cathartic pleasure. And to that end, Iliadis has proven himself quite capable. The beast is revealed, and in due course, the beast is slain. Having walked in the Collingwood's shoes, we're more than happy to vicariously enjoy their destructive rage. For the efficient and otherwise enjoyable experience of "The Last House on the Left," this may be enough to validate the need for a remake. But it's a little too easy, and a little too clear-cut. Rape and murder, it should go without saying, are awful and horrendous aspects of human existence, but they don't make violent revenge any less problematic, no matter how graphically the inciting incidents are portrayed. In its own way, Wes Craven's original "Last House" understood that, more than this pat version ever could.

Movies Like The Last House on the Left (Remake)