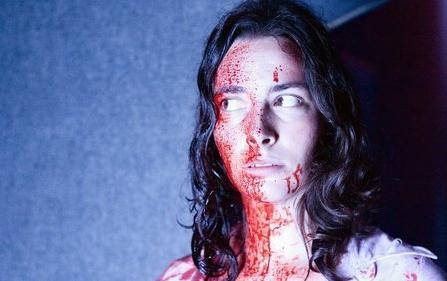 The Last House in the Woods (Movie Review)

In the first five minutes of “The Last House in the Woods” a young boy survives a car accident that kills his father, then escapes the car with his mother only to have her be hit by a truck when she pushes the boy out of the way. Then, as the not-quite-dead mother is writhing in a pool of her own blood on the dark, lonely street, the driver gets out of his truck, picks up a heavy rock and proceeds to repeatedly bash her head in.

All this is happening as the boy, safely hidden in the woods on the side of the road, watches in shock. The boy runs off, we meet a different set of characters and, aside from the occasional time-filling flashback shot of the kid running through the woods, this whole incident isn't mentioned or referenced again until the end of the movie. For better or worse, that's the kind of movie “The Last House in the Woods” is – a throwback to the exploitation films of the 70s that were more interested in blood, guts and a twisty plots than they were in making any kind of sense.

In that respect, “The Last House in the Woods” isn't very different to what Quentin Tarantino and Robert Rodriguez attempted in making “Grindhouse”. Even the fans of “Grindhouse” (myself included) have to admit that the movie was much more a tribute those movies than anything close to actually being one itself. When you spend $53 million to imitate movies that were made for about a one hundredth of that, you are making a movie of a completely different kind. As much as “Grindhouse” did, “The Last House in the Woods” wears its influences on its sleeve. This runs all the way from the “hmm, where have I heard that before” title, to the plot which is unabashedly stolen and stitched together from a handful of classic horror movies.

The first third of “The Last House in the Woods” is practically a remake of the first third of its namesake, “The Last House on the Left”. It follows Aurora and her on-again-off-again boyfriend Rino, who, apparently unaware that crayons and sex don't mix, is the kind of sensitive guy who asks his girlfriend to draw a picture while they make love to see what kind of art she makes in the throes of ecstasy.

In the next scene the two abruptly split up and just as quickly head off to the forest road from the prologue scene to have some not-quite-make-up sex in the car. As the post-coital pair discuss their future, a cherry red Fiat hatchback full of muscle-shirted guidos hopped up on booze and pills pull over to the side of the road to puke. They notice Aurora and Rino and figure that since they've stopped already they might as well do a little punchin' and rapin'. Rino gets beaten to a pulp and locked in the back of his car and the three sleazeballs are about to have their way with Aurora when a middle aged couple drives up and stops to help them. The man threatens the would-be rapists with a gun and they head back to the hatchback, presumably to resume their search of a cheesy euro-disco.

The man and his wife invite Aurora and the still-unconscious Rino back to their house to clean up and calm down. At the house Rino is escorted away to a different part of the house and Aurora finds herself being seduced by Antonio, only to be interrupted by his seven year old son, who has piranha teeth and something that almost certainly isn't red Kool-ade smeared all around his mouth. In typical horror heroine fashion she doesn't really get nervous until Antonio comes after her with a hypodermic needle.

At this point the film has completed its transition from a “The Last House on the Left” clone to more of a “Texas Chainsaw Massacre Part 2” clone. The film carries on with amputations, cannibalism, chainsaw-wielding hillbillies with goiters (in Italy! Who knew?) and bizarrely-colored fluids spewing out of bodies (and in one memorably disgusting scene, into people's mouths). Not only does the film manage to combine modern torture-porn sensibilities with old-school latex gore and schlock, the ending of the movie somehow is able to move past “TCM Part 2” rip-off territory to swipe a good bit of the premise to “It's Alive”, and unexpectedly (possibly unintentionally), “Boxing Helena”.

So is “The Last House in the Woods” a good film? Well, no. Many elements of the film are just awful, from its porno-esque shot-on-video aesthetic, to the soundtrack that sounds like it was made on a 1980s consumer-grade Casio synthesizer, to the fact that the scenes tend to alternate between night and day with no respect for continuity. The acting is pretty bad and is only made much, much worse by the horrible English dubbing. The actress who plays Aurora is a odd choice for the scream queen role because she looks like a normal girl until she makes her “cry face”, which somehow instantly makes her look like she could be Pumpkinhead's sister.

There are also long stretches of the movie where nothing happens that are obviously there to pad the film out to feature length. Some of the sets look like they'd fall over if someone sneezed. Most disturbingly, it's hard to imagine why the makers thought it would be a good idea to bring back the attempted rapists from the beginning of the movie and recast them as heroic figures.

“The Last House in the Woods” isn't fun despite all these flaws – it's fun because of them. With this movie a first time director in Italy with no budget did what two acclaimed Hollywood directors couldn't – make a modern day grindhouse movie, warts and all. Anyone who appreciates this kind of cult fare and the kooky unpredictability that goes along with it will probably have a good time with “The Last House in the Woods”, as long as they go into it with no expectations of seeing a good film and, most importantly, their critical minds fully switched off.