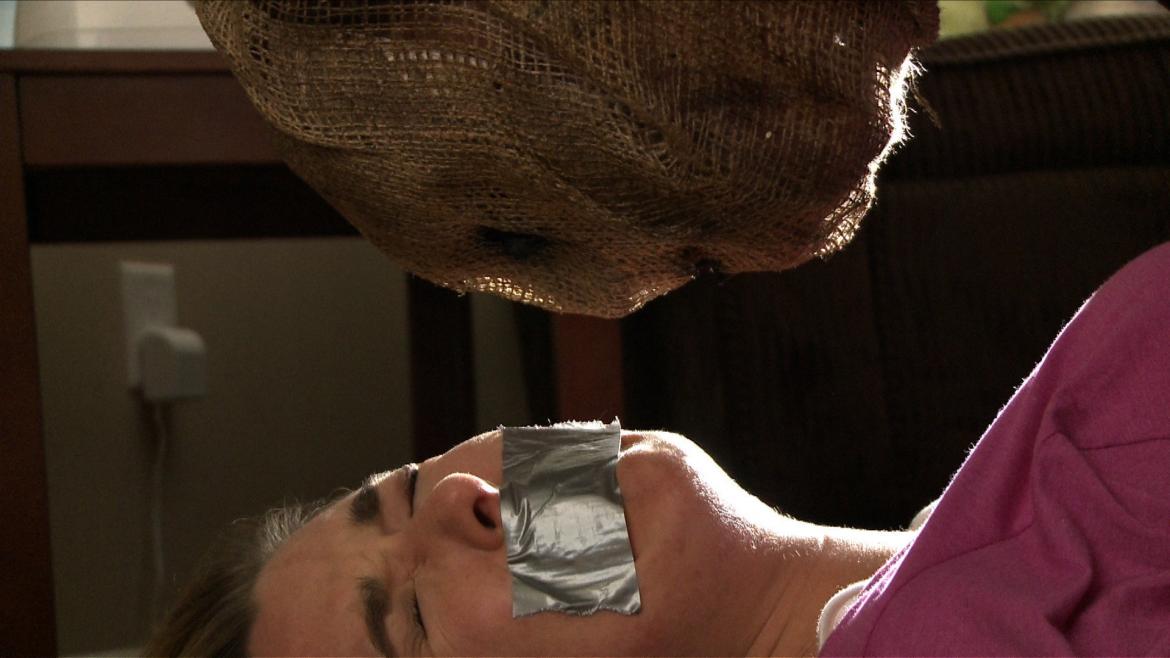 Timely movies about the perils of our online lives walk a precarious line: on the one hand, what horror filmmaker could resist relatable scares about real threats? On the other, it’s silly to retread cautionary tales about a social media landscape that has become, for most people, a mundane fact of life. The Den charts this line clumsily, and veers wildly between being unbelievable and terrifying.

Ph.D. candidate Elizabeth’s research on internet chatrooms (more on that in one sec) mostly involves the expected garbage: boys and men of all ages catcalling and demanding to see her boobs. As disturbing as that is, it’s not long before she uncovers something considerably worse. In her first week of trawling the world wide web for interview subjects on a website called “The Den,” she’s repeatedly contacted by an account that harasses her and sends footage of a captive girl being tortured and murdered. The authorities can’t do much, and soon her friends are being stalked and her laptop is being controlled remotely by someone who means her serious harm. It’s clear that whoever or wherever the woman’s killers are, they’re hunting Elizabeth next.

The story has a lot of implausibilities, not the least of which is that Elizabeth is getting her Ph.D. in talking to people on the internet, but more important to the mechanics of the plot is the suspense of disbelief required to buy that Elizabeth, her friends, family and boyfriend are so disconnected from each other that when they go missing, nobody notices, cares, or can prove that a crime has even occurred. This set-up mirrors 1995’s The Net very closely in that respect, but that film at least had the excuse of being exceedingly paranoid about new technology. In 2015, will moviegoers really believe that a twenty-something university student doing her dissertation on social media is unable to track down any members of her boyfriend’s social network except two people who haven’t spoken to him in years? The movie pretends it’s making deep points about how digital dependence isolates us, but it’s blatantly choosy about how its message contrives the story (everyone but Elizabeth can still be seen going to work, running errands, visiting a park or zoo, or going to someone else’s house).

These plot holes are a distraction that persist for the movie’s entire length, but there’s no shortage of real fear if you overlook them. The Den doesn’t do anything new for the genre--”found footage” and “home invasion” just about covers it--but it’s relentless without being gruesome or gratuitous. Writer/director team Lauren Thompson and Zachary Donohue track a slow, suspenseful course through Elizabeth’s ordinary life until they’re ready to crank up the violence and never let up.

If anything lingers about The Den, it’s the successful dramatization of how the internet--and the world--is especially hazardous for women, and I wish it had made more of a connection (because there certainly is one) between the masturbators and catcallers on one hand and the men who hunt women for sport, or consume snuff films, on the other. The Den is that rare selection from the Netflix scrap heap that’s definitely worth the watch, and at a scant 81 minutes, it leaves you with plenty of time to check every door, window, and closet in your house at least twice when it’s over.