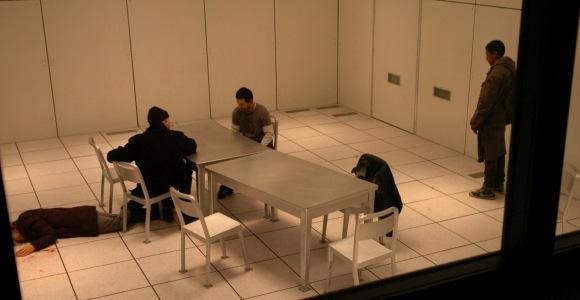 As horror fans we know that almost every film in our beloved genre is in some way rumination on the anxieties of our times. Thus it is down to the skill and vision of the filmmaker to make the delivery system enthralling enough to keep us there for an hour and a half. We jumped for Red Scare body snatchers, irradiated ants, civil rights zombies, end of flower-power Texas cannibals and so on. It should be no surprise that the era of terror has been a fertile time for filmmakers at all levels of production. From the truly exploitative and highly fetishized torture gambits of the ‘Saw’ and ‘Hostel’ franchises to the paranoia epic ‘Right at your Door” producers have seized upon the reality shift and reflected the fears of a new age for over 8 years now. One of the most recent entries into the catalog is 2009’s “The Killing Room”.

Four cash-hungry subjects are brought in for a day long test group with no idea what they have signed on for. Simultaneously we meet a military psychologist named Ms. Reilly (played by Chloe Sevigny) who has been brought in as an observer and is equally clueless as to the nature of the study. The head of the experiment, Dr. Phillips (Peter Stormare) sets Reilly up in front of a monitor and has her observe a tape of the first part of the test. The four strangers Kerry (Clea Duvall), Paul (Nick Cannon), Crawford (Timothy Hutton), and Tony (Shea Whigham) speculate on the purpose of the group and size one another up. Eventually Dr. Phillips makes introductions and sets the experiment in motion with a brutal act.

Phillips reveals to Ms. Reilly that the tape was shot just a few hours before and that she is more or less compelled to observe the remainder of the experiment en vivo as it unfolds through a thin pane of tinted glass. The test subjects gradually unravel and Reilly’s professional ethics are put to the challenge. The Killing room metes out its consequences and the reasons for the diabolical experiment are eventually unveiled.

The first inclination with the “The Killing Room” is to see it as a film whose vital era may have passed since the change in administrations. But as it unfolds we see that this not simply “Saw" or “Hostel” with a new dress for the cotillion. For while the film is an attempt to trump the Saw formula its endeavors to do so are substantive rather than stylistic. The ideas are not new but they are and will stay relevant until making war becomes a more transparent undertaking. For those of you that feel good about the ‘Saw’ series as is, this may be a disappointing, goreless alternative. For those of us who aren’t fans of Jigsaw this film represents a departure from his blueprint in a more meaningful way.

“The Killing Room” is about the process of building and conditioning fear responses and the utilization of those responses to fashion new weapons in order to meet the enemy on his own terms. The film deals with the human cost and the spiritual fallout that results when governments give blank checks to black ops research projects. It is conspiratorial, paranoid and sensationalized; because of and despite this it manages to make its point fairly well and entertain at the same time.

A good deal of the credit here is due to the actors. Timothy Hutton has a nice authenticity to him even if he is playing a little against type. Likewise Nick Cannon holds his own as the most neurotic and paralyzed temporary tenant of the killing room. Peter Stromare may be a bit of a stretch playing a once compassionate physician, who sold his soul for wad and country, but the dude is creepy and that is good enough. Chloe Sevigny is almost always personally pleasing to me. Maybe it’s her sleepy eyed detachment or her fearless career choices; I just really love watching her. Having said that, she might be the weak link where the acting is concerned. She’s not bad, but her character arc seems a little bit flat and pretty predictable. I’m gonna go ahead and blame the writer and the director on that one.

Because of the foreseeable responses of Sevigny’s character and the blatant ‘Saw’ construct “The Killing Room” definitely feels less than original. It also feels a bit short sheeted where the other characters are concerned. A good amount is suggested about each subject but very little of it pays any dividends in terms of audience investment. It is a testament to the pacing, subtext and suspense that even though we care less than we should it is still a compelling narrative. Which I guess explains a lot of the appeal of “Saw” as well, okay not the subtext part.

In the end if I could only recommend one film from the era of terror it would be the mind warping “Sorry, Haters”. Robin Wright- (then) Penn creates one of the scariest characters of the last 25 years ; if you haven’t see it, do. If I had to recommend 10 films from and about the era, I would probably include “The Killing Room”. It’s competent, entertaining and thoughtful.