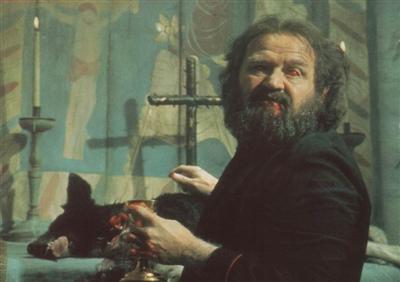 Deepest Carpathia, the Dinu Pass, 1941; a group of Wermacht soldiers seize control of a small Romanian village in order to stand watch over a mysterious stone fortress. The soldiers know little about the massive edifice and the locals speak about its purpose in ominous riddles. Captain Klaus Woermann (Jurgen Prochnow) is the commanding officer and he quickly ascertains that the keep was built not to house but to imprison someone or something. Despite this discovery and a cryptic, foreboding discourse with the keep’s grimy keeper, Klaus decides to let a couple soldiers stand watch alone at the prison castle on the regimen’s first night in the village. One of the solo sentries charged with the watch was admonished by Woermann earlier for trying to pry a silver cross out of the stone wall of the fortress. In the middle of a long shift that same guard is entranced by a suddenly luminescent cross shining forth from a chamber within the keep. He and the other guard on duty work loose the stone surrounding the cross and unwittingly open a massive vault. For their avarice they are promptly torched to cinders by a long dormant demon named Radu Molasar. In the days following the death of the guards a chain reaction is set off that sees the storming of the town by a group of Einsatzkommandos at the heel of brutal Officer Sturmbannführer Kaempffer (Gabriel Byrne). The SS nasties usurp Woermann’s authority and promise to execute the villagers if the partisans they believe to be responsible for the soldiers’ deaths are not brought forward.

When the demon leaves behind some indecipherable graffiti Kaempffer, totally convinced of a rebel plague, sends for a condemned Jewish professor Theodore Cuza (Ian McKellen) and his daughter to try and help him solve the riddle and ferret out the insurgents. About this time a stranger with improbably blue eyes named Glaeken Trismegestus (Scott Glenn) shows up at the local Inn. Glaeken doesn’t sit well with the professor who has quickly fallen in league with Molasar convinced that the monster is actually an avenging spirit who can end Nazi terror. Unbeknownst to everyone but Trismegestus, Molasar has charged Professor Cuza with acquiring a talisman, taking it from the keep and thereby freeing the demon from his internment. To sweeten the deal the Radu has restored Cuza’s failing health and saved his daughter from being raped by the SS. Will Trismegestus stop Radu Molasar? Will Klaus Woermann stop Officer Sturmbannführer Kaempffer? Will Theodore Cuza stop Glaeken from boning his daughter? Will the screenwriter stop throwing in tongue twisting character names that even the cast have a hard time pronouncing?

Director Michael Mann didn’t single-handedly craft the 80’s Day-glo Megalith but his neon fingerprints are all over it. The Mann who gave us Miami Vice showed his love for atomic pastels and synth scores even in this pre-Vice horror foray. I mean really, Scott Glenn bleeds chartreuse blood as Tangerine Dream stretches a single DX7 note across 1 minute of screen time. If you need more signs that we are stuck not just in an 80’s movie but in the director’s 80’s state of mind I offer the following: “Hellraiser” quality lightening FX, Scott Glenn’s over-milled blue contacts, and Molasar's indisputable kinship to Skeletor. Oh and if Michael Carter (Molasar) didn’t have a latex allergy before shooting, he probably had one upon wrapping. Seriously whoever had the commission on foam rubber and fog juice for this film lived out the Reagan era in high style.

There is a good amount of fun to be had at the expense of “The Keep” as well as some elements that still work in the modern era. Foremost in the latter category is Mann’s ability to translate atmosphere through amazing wide shots and the blocking of his actors. Whether it is remembered this way or not, Miami Vice was built equally on color palette, music, fashion, and a cinematic treatment of location shooting. The last fact is often over shadowed by retrospective value judgments of the series' cheese factor, but make no mistake at the time it was a revolution in how episodic television was shot.

Unfortunately, “The Keep” doesn’t spend enough time in the forests, slate caverns and ravines of its Welsh (standing in for Romanian) locations. It rapidly becomes a series of tensionless interiors where Mann’s testosterone fist with actors squeezes the believable character bonds right out of the picture. Perhaps some of this is down to studio meddling into the final cut (which is at least partially understandable given Mann's first cut was 3 and a half hours long) but given that even bankable stars like McKellen and Glenn come across as both dour and ham-fisted the director needs to shoulder the blame as well. Giving Mann further benefit of the doubt around a lot of awkward pacing and thin explanations is fine but it won’t really matter unless we get to see a different cut than the one that is available currently. As it stands “The Keep” is an uneven mix where the weak trumps the watchable, even if you are down to have fun with it’s out dated craftsmanship.