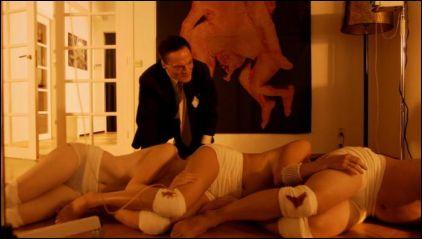 At the ripe old age of 32 I'm fairly confident in saying that I've seen a lot of horror movies. I've seen more decapitations than you can shake a stick at. A few weeks back we joked on the podcast that at this point we've almost become desensitized to genital mutilation. I'm not sure that's a good thing but the point is after thirty plus years of watching horror movies it's safe to say you've seen just about everything. Then "The Human Centipede (First Sequence)" comes along and takes things to a whole new level. For better or for worse the film has taken the horror genre to a place it's never been before.

The idea behind the film first came from a long running joke with writer/director Tom Six and his friends. Whenever they saw a criminal on TV who had done something really awful they would joke that the person should have their mouth stitched to the ass of a fat truck driver. Sick? Sure. But is it funny? To some probably, and those are the people that are really going to love this movie.

Dieter Laser stars as Dr. Heiter, who for years has been considered one of the worlds leading experts in separating conjoined twins. Now that Heiter has retired, he's become obsessed with doing the exact opposite of his former career. Rather then separating people he wants to join them together. Specifically join them together at the mouth and anus. Joining people at the shoulders or hips would just be too simple for a pro like Heiter.

We quickly learn that our doctor friend has tried out his experiment on three Rottweiler's. He even keeps a picture of his three dog creation next to his bed and a sign on his front yard reading "My sweet three dog". He's a sicko sure but he's also got a soft spot for animals. With his tests on dogs proving a success, it's time to move on to people. Enter Jenny and Lindsay, two American girls on vacation in Germany and looking for a good time. On their way to a party in the unfamiliar German suburbs, their car breaks down and they find themselves lost in the woods while trying to find help. They stumble upon Dr. Heiter's house and the fun begins. After being drugged they awake in the Dr's basement, strapped down to gurneys with a third companion, a large truck driver that Heiter kidnapped at the opening of the movie.

This is about the time I'd say the majority of the group I saw the movie with started to get a large knot in their stomachs. The doctor explains in great detail his plans. To cut the tendons in the knees of his captives, sow them together from ass to mouth and connect their gastric systems. Thus he'll be creating a real human centipede. This is almost about the time that a handful of people walked out of the film.

If they had stayed though, they would have found the rest of the film to be surprisingly entertaining. Yes it's fairly graphic, but not nearly as violent as I thought it would be. At some points the movie is actually funny. At one point while waiting for the girls to pass out Dr. Heiter quickly comments that he "doesn't like human beings". In context and with a creepy deep German accent the line got more than a few chuckles. At another point when the doctor finally completes his surgery and the three are lined up in his living room you almost feel excited for him. I was a half second away from cheering for him. Like I said, it's a "special" kind of person that's going to like this movie.

I think the most surprising thing to me about "The Human Centipede" is how well it was shot. Six could have easily cut corners and gone the route of a straight up torture movie but he decided not to. There are no grainy film effects and there's no crazy camera shakes trying to add to the gruesomeness of the movie. It's a straight forward horror movie that could hold up to any widely released film, in visual quality at least. That's not to say the movie isn't without its cringe worthy moments. I'm not the least bit ashamed to admit that during a scene when one of the girl's mouths has become infected and is beginning to ooze I had to go into the men's room and splash cold water onto my face. The scene when all the eating finally catches up to the head person is also particularly hard to watch. But as a whole the film will probably surprise a lot of people with how easy it is to accept that you're watching three people sewed together.

While I couldn't recommend "The Human Centipede (First Sequence)" to everyone, I would say any horror fan out there that's grown tired of the "Saw" films and countless remakes should give it a shot. And by "give it a shot" I mean watch it alone in your basement and never tell anyone about what you saw. In a time where films can be churned out easier then ever, Tom Six has put the time and effort into making a truly different horror film. I'm not going to lie and say it's an easy watch. It's probably the roughest film I've ever seen. But after I walked out I felt like I had actually accomplished some great feat by making it through. That's got to be worth something.