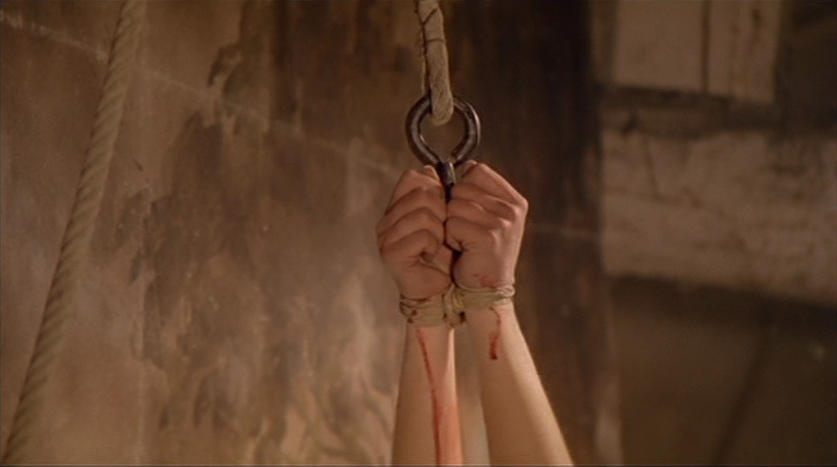 A young artist travels to a remote Italian village to restore a painting in a small out-of-the-way church. As soon as he begins his work he receives threatening phone calls warning him against restoring the painting, and a friend who had some information about the original artist, is murdered by being pushed out of a window. Later on the artist meets a young teacher and they begin to have a romantic affair while he works on the painting, as the inhabitants of the village begin to make their plans for him known.

“The House with Laughing Windows” is a “giallo” film that has a lot going for it: a mysterious painting, an incredibly creepy tape recorder with a bizarre recording by the deranged artist of said painting, and of course the mysterious title that refers to a house where the bodies of murder victims are buried. According to IMDB.com the painting in question is supposed to be a rendition of Saint Sebastian (http://commons.wikimedia.org/wiki/File:Carlo_Crivelli_-_Saint_Sebastian.jpg ), who is often depicted in paintings as having arrows going through his body in every which way. However in this painting, the subject in question is being hung by his arms and stabbed with swords by two horrifying women. The painting is pretty unsettling, and even though Catholic churches do tend to have a lot of really bizarre artwork, I feel like actually seeing a painting like this one in a church would a pretty big shock.

Also the artist finds a recording on a tape player that is so old and creepy that it would even make Jigsaw green with envy. When he plays the recording he hears a breathy man talk about colors and blood and all other sorts of nonsense, and this is done several times throughout the movie. Apparently this was left by the artist of the St. Sebastian portrait, who was so obsessed with death that he would only paint people at the moment of their dying.

Although this movie does have a lot of intriguing things that really hook you and make you want to find out, along with the artist what is happening in this town, it doesn't have a lot else going for it. Italian horror movies from the 70’s tend to have a certain aged look to the picture, or film quality, that I think generally makes them look better, or at least more endearing. I don’t know enough about film to know exactly what that is, but this movie in particular has aged poorly enough that it doesn't have any of the charm you might expect from an Argento or Fulci movie from the same era. On top of that the directing and camera work seems fairly amateurish. For instance at one point the artist is supposed to have sex with a woman, and they lay down in bed together, and then the next scene is supposed to be them afterwards. However you can tell they just laid down next each other and the director cut immediately to the next scene because they are in the exact same position with all their clothing still on.

On top of all that, the more giallos I watch the more ridiculous the giallo formula strikes me as: the intuitive artist solves the mystery of a black-gloved slasher/murderer while the police are incapable of doing anything. Although the tone and structure are very similar to other giallos, this movie is a little less formulaic at least, since there is no killer that specifically wears black gloves, only one person dies until the finale, and our artist hero isn't especially intuitive. He actually doesn't solve anything with his intuition at all, but instead goes bumbling around from one precarious situation to another.

Giallo aren't like a typical murder mystery since the main character of the story doesn't actively find clues that lead the audience closer and closer to the killer. However the ones I've seen are typically pretty interesting because they tend to have a lot of slasher-esque violence, and in some of the stronger examples like “Deep Red” there is more than enough crazy stuff going on to keep you engaged until the final reveal of the killer. However in the case of “The House with the Laughing Windows” it feels like this movie is mostly filler until the finale, which is admittedly still pretty crazy.

“The House with the Laughing Windows” is a movie that seems to come up in discussions about giallos outside the Argento/Fulci catalog. I think that’s understandable if you are a huge giallo nut, and if that is the case then this is a movie you probably will want to see. However I personally found a lot of this movie fairly tedious so I couldn't recommend it to the average genre fan.