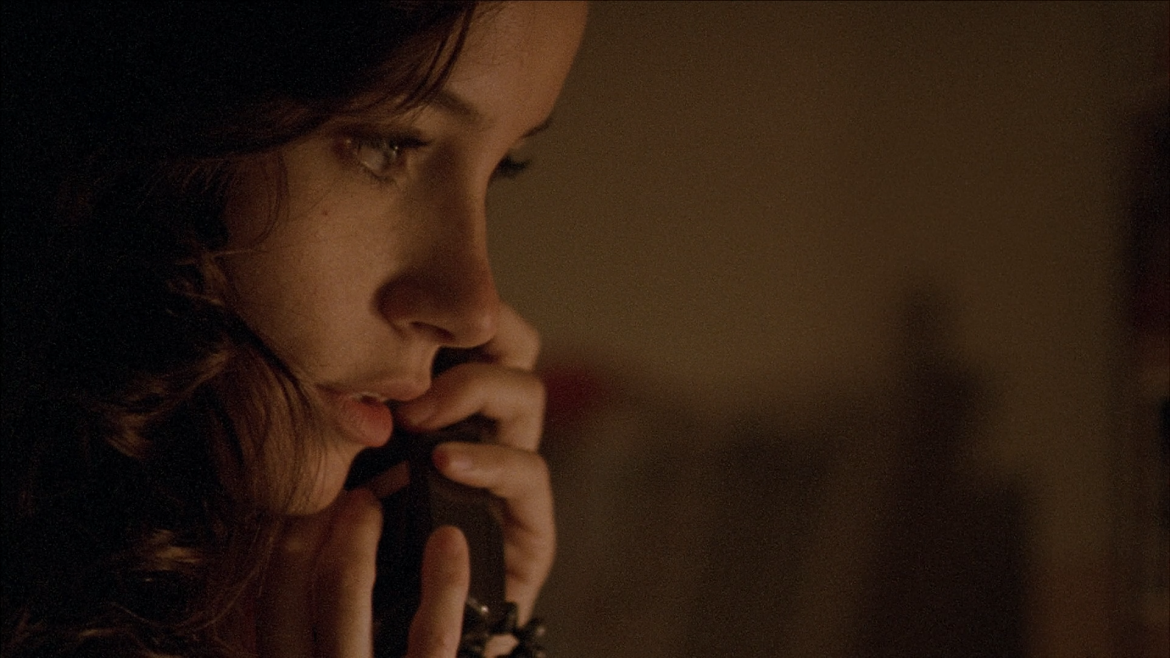 The House Of The Devil (Movie Review)

Anyone who has suffered through any of my reviews on this site is probably aware of the fact that modern mainstream horror and I simply do not get along. In fact, I'm so brutally disenchanted with the genre right now that I often wonder why, exactly, I continue to waste my precious time and remaining brain cells on films that do nothing more than insult my intelligence. Perhaps this jaded point-of-view is true source of my recent cinematic funk, derailing the respective experiences long before the opening credits begin to roll. Although I like to think of myself as a fair and objective individual, sometimes my best intentions aren't always executed in the most efficient manner possible. In other words, I'm moody and irritable.

Despite falling into the increasingly trendy "retro horror" category, Ti West's thoroughly creepy 2008 outing "The House of the Devil" is exactly the sort of eerie, deliberately-paced fright flick that prevents me from dramatically throwing up my hands and abandoning the genre altogether. Sure, it borrows heavily from those goofy satanic horror movies produced during the 70's and 80's, and, yes, it's more of a "slow burn" than a by-the-throat thrill ride, but overall the picture achieves a level of atmospheric wickedness that will surely make West's like-minded contemporaries green with envy. Rob Zombie has been striving to create this sort of picture since the beginning of his film career, to no avail.

The beauty of the film lies in its simplicity: Cash-strapped college student Samantha (Jocelin Donahue), desperate to land her own apartment, takes a mysterious babysitting job in the middle of absolutely nowhere. Upon arriving at this insanely foreboding location, Samantha is greeted by the kindly and gracious Mr. Ulman (Tom Noonan), who, after much trepidation, informs his would-be employee that the provided job description was a little misleading. Instead of watching over a child, Samantha will be required to look after his wife's mother, an elderly woman who, he assures, is perfectly capable of taking care of herself. However, to ease his spouse's troubled mind, he agreed to hire someone in case of an emergency.

After meeting the unnerving Mrs. Ulman (Mary Woronov), Samantha is left to her own devices. Her initial search of the strange couple's spacious abode proves fruitless, though she does manage to cause a rudimentary amount of property damage in-between shooting pool and watching news coverage of the impending lunar eclipse. As the night slowly progresses, Samantha begins to suspect that there's something highly unusual about these subtly unpleasant homeowners. Her suspicions soon lead to terrifying revelations, all of which seem to be strangely connected to the unusual event transpiring in the heavens above.

Warning: An abundant, fully-functional attention span is essential to appreciating what writer/director Ti West has accomplished with "The House of the Devil." Instead of endlessly assaulting you with tired cliches and gratuitous violence from the first frame to the very last, West smartly allows the story to build up a tremendous amount of steam before revealing its darker side. There are, of course, a few quick blasts of in-your-face horror to keep you awake and alert, a necessary cinematic component that should, in theory, keep those who need constant stimulation from labeling the film an insufferable bore.

As strong as West's script and presentation may be, the entire movie would have been an unwatchable mess if not for the host of savvy performances from the film's collection of genre-related veterans and talented newcomers. And while I'd like to say that frequent Paul Bartel collaborator Mary Woronov and "Robocop 2" villain Tom Noonan are the strongest fruit on the vine, it's Jocelin Donahue who ultimately steals the show. Considering she's essentially carrying the entire movie on her shoulders, it's good that she's instantly likeable and relatively talented. Otherwise, I seriously doubt I would have cared enough to see the story through to its conclusion. Amazing what a sympathetic protagonist can do for a movie.

"The House of the Devil" will no doubt polarize audiences, though I certainly believe there are individuals out there who will understand and appreciate the film's unique brand of intelligent, through-provoking horror. West's knack for atmosphere, combined with the film's spot-on pacing and its willingness to shed a little blood, should satisfy those in search of something with a little more depth than the fodder currently being offered at the local cineplex. Were it not for these smaller, more focused productions, I seriously doubt I'd still be watching genre films. And for those who claim that "The House of the Devil" is way too boring for their tastes, kindly remember this: Patience is a virtue. Be virtuous.