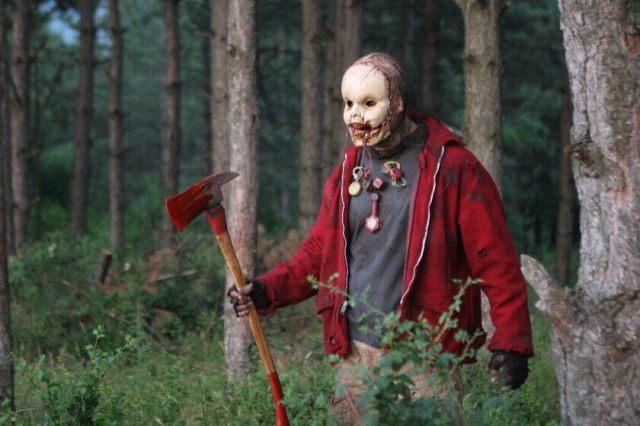 It's never a good sign when a movie believes its own hype, especially when you're dealing with a straight-to-video horror picture that doesn't deliver the goods. If the DVD packaging and/or promotional material feels the need to constantly remind you that the film you're about to see is one of the most shocking, revolting, and/or mind-numbingly disturbing experiences you'll ever have, there's a very strong possibility that it's going to be a total letdown. A truly effective movie, one that will savagely scar your psyche and infect your dreams for weeks to come, doesn't need to utilize cheap promotional gimmicks or misleading descriptions to separate you from your entertainment dollar. Not to shoot myself in the foot, but review quotes and self-proclamation are often employed to mask ineptitude.

Dave Parker's immensely disappointing 2009 slasher "The Hills Run Red" uses a sticker on the front of the packaging to warn potential viewers about the film's coarse content. And while there is a fair amount of pointless nudity, empty sex, and graphic violence peppered throughout the film, it's not nearly extreme enough in its presentation to warrant such a caveat. In this particular case, it's a device to make you believe the film you're about to watch is going to rock your twisted little world when, in fact, it's only going to help darken your opinion of both the director and distributor Warner Premiere, the latter of which doesn't need any more enemies.

Had "The Hills Run Red" actually provided yours truly with an evening's worth of quality amusement, I could have easily overlooked the hype and silly marketing ploys. Unfortunately, that's simply not the case. What we're given is yet another "Scream"-inspired horror movie populated by a stable of obnoxious characters who absolutely adore the genre, and spend the majority of their screen time waxing intellectual about what constitutes a good horror picture. The irony, of course, is that Parker seemingly has no clue as to what makes a film like this work, a fact which becomes even more apparent as the story barrels towards its highly unsatisfying conclusion. If you can't figure out the twist after twenty minutes, open microwave and insert head.

Parker definitely deserves an "A" for effort, as "The Hills Run Red" is powered by a genuinely intriguing premise, one that the filmmakers ultimately fail to properly explore. A group of friends, eager to get their grubby little hands on a notorious slasher flick that mysteriously disappeared after its initial screening, journey into the middle of nowhere to locate this elusive cinematic treasure. Along for the ride is the director's troubled daughter, a former drug-addled stripper who obviously knows a lot more about the legend than she's letting on. Their adventure is soon complicated by the presence of a hulking brute known as Babyface, who, coincidentally, is the exact same killer from the movie they're looking for. I’m sure you’ve already figured out where this road is going; you've been down it several times before.

Surprisingly, for a film that promises so much graphic violence and disturbing content, the overall body count is actually pretty low. Most of the gore is provided courtesy of a series of quick, stylish "flashbacks" from the film our heroes are searching for. The quality of the effects ranges from the outrageously bad -- I'm looking at you, cheap CGI -- to the simply outstanding. Babyface, meanwhile, has exceptionally designed and realized; had this surprisingly creepy individual been assigned to a different motion picture with a much stronger script, he could have been an icon. As it stands, he's a throwaway killer in a movie you'll forget about as soon as your disappointment subsides.

Parker’s biggest problem, I think, is his inability to generate suspense. He has a plethora of tools at his disposal -- a snazzy killer, an able cast, and a great special effects team -- yet he seems incapable of delivering a single thrill or jump scare. For someone who seems to love the genre as much as he does, I’m beginning to wonder if he truly understands the definition of the word “horror.” Tossing guts and grue and naked ladies at the audience every so often isn’t the way to frighten your audience, though this is clearly what most directors today seem to believe.

Call me a snob or an elitist if you must, but I expect more from my horror movies these days. "The Hills Run Red" definitely had potential, as illustrated by the picture's enormously effective opening sequence and its memorable killer. Unfortunately, it's all down hill from there. Truth be told, I should have expected as much coming from Warner Premiere, a company that seems hellbent on flooding the market with cheap fodder that will appeal to both easy-to-please fanatics and lobotomy patients alike. And as much as it pains me to say it, not even William Sadler could salvage this wreckage. If this is the future of horror, I'm a pretty nurse.