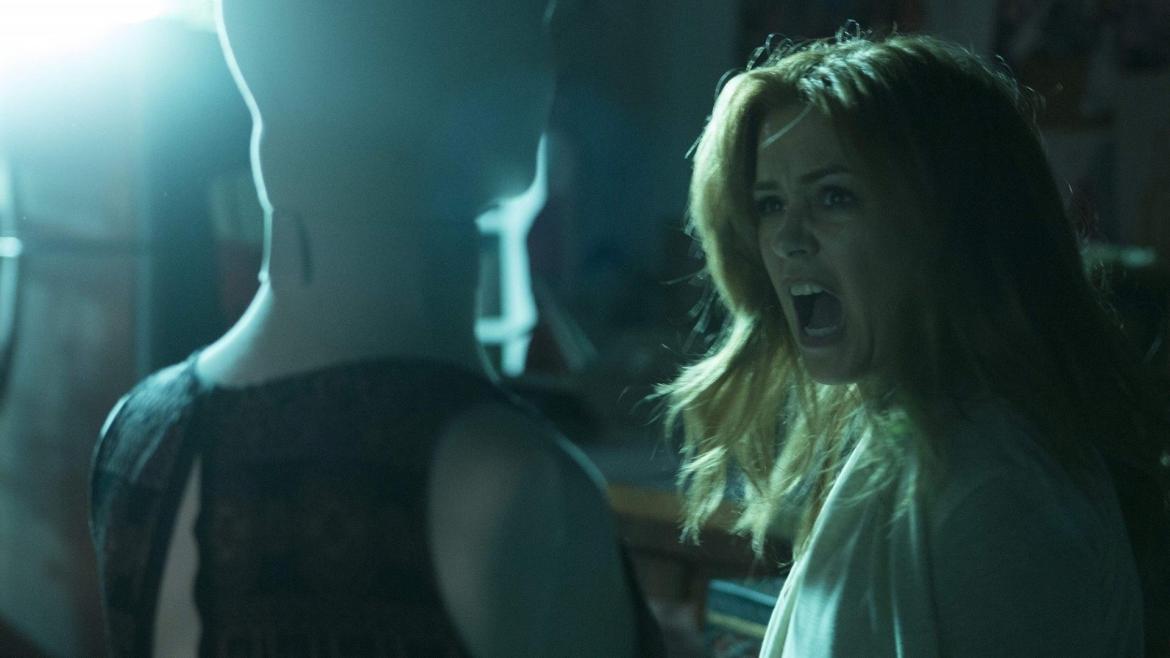 Before even a second of anything supernatural goes down in the tedious thriller Visions, Eveleigh (Isla Fisher) and her impossibly rugged husband David (Anson Mount) already have quite a bit going on. Eveleigh is just a year removed from a tragic auto accident and is still suffering from some residual PTSD. The couple has also just ditched LA to move out to the country and run a vineyard, because how hard can that be if you have zero experience? Oh, and Eveleigh is three months pregnant with their first child. Somehow, despite all of that, Eveleigh still manages to find the time to suspect that they’re sharing their new home with some restless spirits.

Soon after they move in to their vineyard, David throws himself into the work of actually learning how to run a vineyard. Meanwhile, Eveleigh throws herself into being plagued by ghostly visions. These range from the fairly mundane – moving chairs and exploding wine bottles – to more extreme happenings such as bloody handprints on walls, dead bodies floating in pools of water, and menacing hooded figures. David chalks all of this up to the baby, the PTSD, or some combination of the two, but Eveleigh is convinced spookier doings are afoot.

Back to those moving chairs. There’s a scene where Eveleigh hallucinates that an unseen force keeps sliding chairs in her path. It’s a very appropriate scene considering that’s exactly what the film keeps doing to audiences. It throws an endless amount of misdirections and red herrings at viewers to mask the true threat lurking at the vineyard. In addition to the aforementioned possible causes, superstitious laborers and fumes from a suspected meth lab are also in play. These last two subplots go absolutely nowhere; they’re just chairs lobbed at us by director Kevin Greutert and screenwriters L.D Goffigan and Lucas Sussman.

That lack of focus is the biggest failing of Visions. There’s a lot going on in the movie and there are ton of familiar faces occupying supporting roles (Eva Longoria, Jim Parsons, Gillian Jacobs) but very little of it gets explored or utilized in any meaningful or interesting way. When you cast TV’s Eva Longoria in your movie, the expectation is that she will be required to do something. Instead, she just sort of wanders in and out of the movie as needed. Sure, she’s a great get for your marketing department, but, from a narrative perspective, she’s taking precious minutes away from characters that have more important roles to play.

Visions is from the “loud noises” school of thought when it comes to scares. At one point, someone unexpectedly knocks on the door and it sounds like the world is ending. These occasionally elicit a few jolts, but that’s it. The rest of the movie is mostly tension-free.

For much of its runtime, Visions is a thin, unremarkable thriller with a likable yet wasted cast. It does manage a few nice twists late in the third act, including one which puts an admittedly clever spin on the whole “We moved into a haunted house” trope. However, the climax isn’t nearly good enough to drag Visions above the grade of the kind of movie you put on in the background while you do other things.