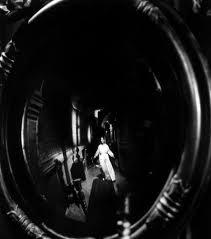 I went to the video store this past weekend to grab a stack of horror movies and was pleasantly surprised to find that the title I was least interested in, was head-and-shoulders above the newer movies I picked out. At first I was pretty skeptical of watching a G-rated black and white movie from the 60's. Thankfully I went ahead and rented it, and what I found was a haunted house film that was scary enough to have me looking over my shoulder every time I heard a noise in my own home.

“The Haunting” is based on Shirley Jackson’s novel, “The Haunting on Hill House.” It starts out as a paranormal researcher attempts to put together a team to investigate the notoriously haunted Hill house, however nearly everyone he wishes to have join him is too terrified of the house’s reputation to come along. The only people who join him are a young man who is going to inherit the house, a psychic woman, and a spinster named Eleanor who knows nothing of the house’s history.

This all sets the viewer up with the expectation that the movie will be about the investigation of the house, however the remainder of the movie is all about the house’s relentless assault on Eleanor. Eleanor is an woman who has taken care of her aging mother for the last eleven years and is burdened with guilt because she blames herself for her mother’s death. She lives with her sister and sleeps on her couch, and since her life is so miserable she is more than eager to head off on an adventure and explore Hill house. Eleanor was chosen for the project because the researcher claims she was afflicted by a poltergeist as a child, which is something she desperately denies ever happening. From the outset she seems a bit unstable, so much so that she appears either developmentally delayed or emotionally stunted.

The first night they stay at Hill house it begins it’s attack on her by tricking the men into going outside while it tortures Eleanor with strange booming noises, cold chills, and voices. From there on out she becomes simultaneously repulsed by the house and also terrified that she will be asked to leave. Everything seems to be stacking against her, even her own team member who seems to only use her psychic powers to come up with crueler ways to insult Eleanor. Eventually, after several nights of torture, Eleanor comes to believe that she “belongs” to the house.

What impressed me the most about this movie was it’s “less is more” approach to storytelling and scares. The film basically uses sound alone to create a frightening and incredibly tense atmosphere. Normally in a movie even over the top depictions of demons and monsters aren’t that frightening, however showing relatable characters being faced with more subtle things, that would be enough to terrify real people, was incredibly effective. Also the film doesn’t explicitly describe the reasons for the haunting, but rather peppers in information about the former owner of the house and it’s residents. For 1963 this strikes me as a remarkably intelligent film, especially when today’s mainstream movies basically have to beat the audience over the head with information to insure there isn’t a single moment when they are unsure about what is happening.

The narrative of the film however, seems to be a bit bizarre considering you are led to believe the film is about the investigation of the house, when it is actually just about the house attacking Eleanor. There really isn’t much of an investigation of the house at all. While I was watching the movie I kept expecting the characters to be looking for the source of the haunting instead of what was actually happening. I’m not sure if this was completely intentional, however I feel like the bizarre narrative of the film made it disorienting enough that it gave the film a genuinely nightmarish quality, where it felt like you were being thrown from one stressful situation right into another with no explanation and very little structure.

“The Haunting” is a really cool movie, and surprisingly scary, especially considering it’s “G” rating. I could understand how some viewers might find the film’s firm commitment to “less is more” a bit frustrating, however I think for fans of haunted house movies this is definitely one to check out.

Haunting at the Beacon (The Beacon)