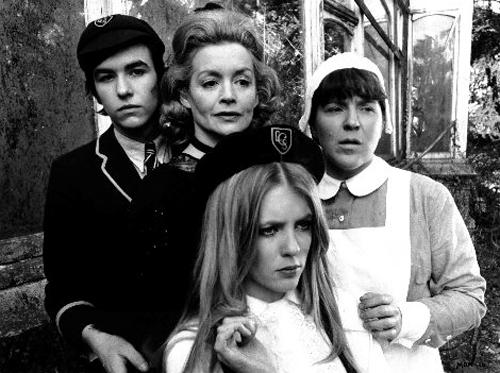 Come on down a rainbow slide to Candyland actualized, where bikkies and dollies and sweeties abide the every whim of the child inside. Orange and lemons say the bells of St. Clement’s. If on arrival you should find, a new friend smiling and happy times, then ask no questions, follow the rules and friends you’ll stay in a castle of fools. But try to run or spoil the fun, then ghouls you’ll find of fiendish mind, who will send you to the angels with a broken spine.

Girly lives on a dilapidated estate with her Mumsy, Nanny, and brother Sonny. The quartet spends their days in a strictly controlled, regressive cosplay. Despite some exaggerated coddling from Mumsy, Sonny and Girly are actually adolescents and when they aren’t in suspended childhood playing Cowboys and Indians by the family palazzo they are drawing in unsuspecting sots from around London to function as toys for the breaking.

Girly is the bait for these excursions and she plays expertly on the dark fancies of dirty punters and drunken lechers. Once in the clutches of these two malevolent teens the dirty old guests are welcomed into a life-sized game of house with a matriarch who behaves like a smiling SS commander. One night Sonny and Girly return home with a man they dub “New Friend in 2”. They ensnare New Friend by convincing him that he pushed his girlfriend from the top of a playground slide in a fit of drunken frustration. Now captive to the family of fetid aristocrats New Friend is pushed and pulled through their devilish games at a whim. Soon enough the clever New Friend figures out that through calculated boudoir cajolery he can set the women of Mumsy manor against one another, and perhaps even remake the family home in his own image.

“Girly” is a well paced satire of the English aristocracy with great dialog and a tight little story arc. The characters are all well written, the pacing brisk and the casting absolutely perfect. Ursulla Howells as Mumsy does a very convincing dissociative June Cleaver meets Hyacinth Bucket. Pat Heywood as Nanny is grotesquely smarmy and Howard Trevor as Sonny is the consummate toffee-nosed brat. But the show really belongs to Vanessa Howard as the seductive, petulant and deranged Miss Girly. She is jailbait and malice wrapped in a coquettish little schoolgirl uniform. Girly and her family’s manner of speech is a mixture of nursery rhymes and sticky sweet condescension that vibrates with a jocular sort of violence. Howard stands out from the ensemble because she uses this language to perfection and her character's reveal is well motivated and executed. All the acting praise granted, the film’s crown jewel is unquestionably the production design. There is a “Grey Gardens” meets “Baby Doll” in the ruins of Willy Wonka’s factory look to the film. Add to this a dreamy soft filter on many scenes and you have a nice balance of childhood dreaminess and the decline of empire.

My complaint about “Girly” is that while there is a lot of entertainment value it isn’t consistently fun or unexpected. The plot trajectory mirrors that of the Clint Eastwood vehicle of the same era “The Beguiled”; but unlike that film the mania in this movie is down played for so long that the audience is left waiting too long for the other shoe to drop. While “Girly”’s subject matter may have been enough to shock and draw in an audience in 1970, the modern genre fan may lose patience with it’s low impact depictions of sex and violence regardless of how well they are shot and cut.

To put a finer point on it, for fans of the recent British film “Mum and Dad”, “Girly” is like the flipside of that nasty little piece of business. Where “Mum and Dad” is a gruesome tale of grubby proletarian deviants enslaving young people to feed their sadistic compulsions, Girly’s story is a suggestive one of degraded bon vivants holding fast to childish illusions of privilege at the expense of drunken dolts who have fallen asleep in the park. Another difference is that “Girly” survives mainly on the strength of its characters and subtext. The idea of the modern peerage being full up with dangerous puerile twits who literally drain the life out of England’s other classes is well visited and amusingly portrayed here, but it is never graphic or unnerving.

So “Girly” will not be for lover’s all things modern and it will not please the hardcore viewer with gratuitousness. If however you want a well written, nicely rendered black comedy about crazy rich folk, this fits the bill. Or in the language closer to the film itself…Happy Mumsy, Girly, Son watch the naughty new guest run, if he hollers first you stun, then perhaps cut out his tongue. Have some tea cakes, treacle too, take your medicine but skip the stew. It may be yummy, it may be hot but it may be a head boiling in that pot.