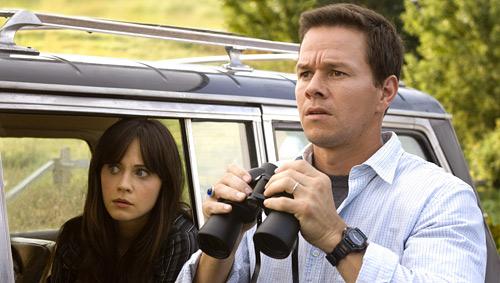 "The Happening" starts on a sunny day in Central Park. People are walking to work, exercising their pets, and generally going about the every day things they normally would. They're all interrupted however by a sweeping wind and a scream in the distance. Immediately afterwards, everyone in the park begins talking strangely, staring in the distance, walking backwards, and eventually killing themselves. Cut to a nearby construction site. A man falls from a high ledge he's working on, then another, then a gaggle all fall to their death as their comrades look on in horror.

We then cut to a Philadelphia high school, where science teacher Elliot Moore (Mark Wahlberg) is trying to pique his children's interest in the (real life) epidemic sweeping the country over the last few years of bees up and abandoning their colonies for no discernible reason. An interesting discussion, except that Wahlberg (and Shyamalan for that matter) fail to mention the real reason why that's scary... that our entire food chain depends on the honey bee and the honey bee alone. A strange exclusion for a film so bent on making us fear nature's wrath.

Once the children and teachers get word of what's happening. Wahlberg returns home to his distant wife Alma (Zoey Deschanel), gathers her up and heads for the train station. There he meets up with math teacher and colleague Julian (John Leguizamo... ugh) and his younger daughter. They all hop on a train to escape the city, along with throngs of other passengers. Along the way, word comes down that the same instances of mass suicide are happening all across the Northeastern US.

The government's best guess is some type of biological attack, with a nerve agent that seems to reverse the instinctual will to survive in humans, causing them to end their own life. Panic sets in when the train is stopped, and the passengers are informed that all train service has halted for good because they've "lost contact with everyone". A ragtag group of people now find themselves stranded in a small Philadelphia town, cut off from society and forced to try and stay alive while making some sort of sense about what is happening.

Whew, okay. Now, right off the bat I have to say, that casting Mark Wahlberg in this film ruins it from almost the first frame. Let me explain something for those who aren't aware... Mark Wahlberg is a dick. Had I to hazard a guess as to what his daily routine is like, I'd say that he fills his days by tripping old ladies and punching little children. Did you see "The Departed"? That's him in real life. Trying to act like a science teacher, he looks like a lost high school kid in his first dramatic role. He doesn't know how act mild mannered and cowardly, so he tries to do it by making everything he says sound like a question. Deschanel does nothing to help him out, except for make the same bizarre, sort of cute faces she's known for. Needless to say, she's also out of place. Throw in Leguizamo, and some of the scenes with the three of them are the most stilted, awkward, borderline retarded exchanges I have ever seen committed to film.

After the opening act, the rest of the film consists of our main trio wandering around small town Pennsylvania and trying to stay alive. In the process, Wahlberg is racking his brain to try and figure out exactly what is happening. And he does... sort of. Don't worry M. Night haters, there's no real "twist" here. There's more of a revelation about halfway through the film that if you're like me, will make you groan out loud. It also sort of ruins the suspense, because everything from there on out consists of the characters running away from the wind... you'll have to see it to understand what I mean.

And there are a handful of reasons that you might actually want to sit through this. Given the lesser constraints of the R rating, Shyamalan does throw in a couple of "oh snap" moments for the audience. A nice car crash here, kid getting shot there, and the occasional corpse-tree are enough to at least keep you engaged. In addition to the moments that do work though, there are also a handful of uninspired scares that only make you jump because of the unnaturally loud noise that accompanies them.

I have to say also, that at a certain point this film made an interesting turn for me, and became one of the most unintentionally funny movies I've seen in a long time. Wahlberg's bizarre delivery is only the first of a laundry list of things you'll find to laugh at. And despite the fact that I didn't like it, I actually found myself continually curious as to what ridiculous thing was going to happen next. M. Night even tries his hand at comedy here, with a surprising amount of light dialog exchanges thrown in. I have to say, some of them did actually make me laugh. But when the rest of the film is an incredibly serious and earnest end of the world story, those moments seem embarrassingly out of place.

Perhaps my biggest frustration with this entire affair, is that when it's all over there is no real explanation as to what is happening (ironic, eh?). You can almost see the motivation. Shyamalan has been slammed for his exposition heavy twists for so long, that it seems as if he's intentionally left this film as wide open and vague as he possibly can. In the process, he leans too far in the other direction and leaves the audience feeling unfulfilled. Honestly though, it's not as if I was even invested enough at that point to really care.

At one point in "The Happening", an awkward teenager joins the list of a dozen other characters who turn to Mark Wahlberg and say "Why is this happening"? In the dramatically silent moment that followed, I decided to take the opportunity to turn to my friend and whisper, "because you touch yourself at night". We both burst out laughing, and the funny thing was, no one really cared. That exchange was the most interesting thing that happened throughout the entire running time of the movie, and that's all I really have to say about it.