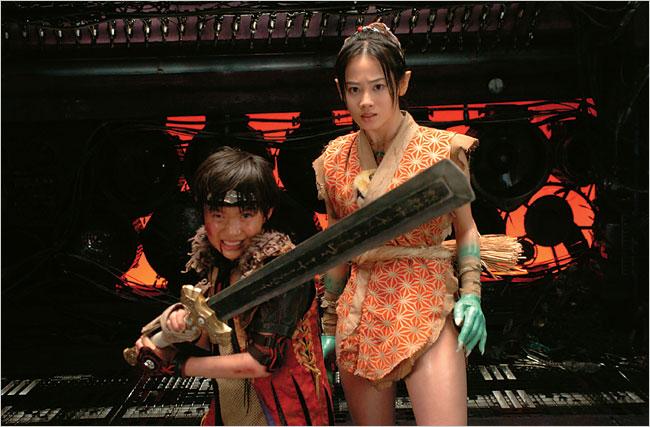 At first glance, the charming 2005 child-like Japanese fantasy flick “The Great Yokai War” (aka “The Great Spook War”) doesn't seem like a Takashi Miike film. Nary a painful nipple piercing, arterial spray, or cocky yakuza thug with a closet full of depraved sexual perversions can be found anywhere throughout the picture.

What’s more, the movie even comes equipped with a snazzy PG-13 rating, something yours truly never thought he’d find plastered on the promotional material for a project directed by the man responsible for “Audition,” “Ichi the Killer,” “Visitor Q,” and the surprisingly solid surrealist prison saga “Big Bang Love: Juvenile A.” This begs the question: Can a motion picture crafted by this viscerally inclined cult director flourish without the man’s penchant for sex, violence, and deliriously long lines of cocaine?

The answer, simply put, is yes. “The Great Yokai War” is truly and completely entertaining, proving that Miike doesn’t necessarily need these less-than-moral elements to craft a truly engaging cinematic experience. In fact, once the initial preteen-friendly facade begins to wear off, you’ll quickly discover that this is just as twisted and maniacal as the talented filmmaker’s previous efforts, though his style has been filtered and restrained in order to appeal to kids with a sweet tooth for high fantasy and adults who grew up on “The Dark Crystal,” “The Neverending Story,” and the David Bowie classic “Labyrinth.” However, if your child suffered numerous panic attacks during “Monster House,” chances are he or she might be the sort of iron-nerved viewer this darkly imaginative saga was crafted for.

“The Great Yokai War” chronicles the otherworldly adventures of an 11 year-old boy named Tadashi, an inquisitive child who reluctantly moves to a small rural township after the divorce of his parents. Typical childhood struggles apply, though things get a bit more involved once our pint-sized hero is dubbed the “Kirin Rider” at a colorful local festival. Almost immediately after the title has been bestowed upon the wee lad, Tadashi is recruited to help aid a bizarre collection of mythological Japanese monsters (yokai) in their battle against a twisted foe who would love nothing more than to transform these lovably kooky creatures into mechanical and technological villains. Peculiar set-pieces and random yet oddly enjoyable scenarios soon follow.

Miike borrows from several creative sources -- namely “Alice in Wonderland” and the films of Hayao Miyazaki -- to bring Hiroshi Aramata’s novel to life on the proverbial big screen. The inspired characters Tadashi encounters along the way range from cute and cuddly to fearsome and deranged, in particular "Battle Royale" favorite Chiaki Kuriyama’s dastardly yokai killer Agi. Her treatment of the captured yokai will surely give most well-adjusted children nightmares for several sleepless weeks, especially the way her cruelty seems to ooze naturally from her strangely attractive pores. Don’t let the aforementioned MPAA rating fool you, folks -- Miike's warped sensibilities are definitely in top form, though his depravity has taken on a friendlier shade of foul this time around.

That said, the film is certainly not without its flaws. The copious use of green screens and CGI are obvious and occasionally cheap-looking; the runtime is a little too long for its own good; the acting is rocky and frequently flat; creepier characters might prove to be too frightening for children and too goofy for adults. The latter, of course, is probably intentional, as Miike has stated in several interviews that he purposely included severely scary moments to elicit screams and shrieks from the picture’s largely adolescent audience. The rest of the minor complaints tend to vanish once you allow yourself to get sucked into this incredibly detailed and expertly realized landscape. Assuming, of course, you possess the uncanny ability to do so.

It's really not that hard to give yourself over to "The Great Yokai War's" many eccentric charms. Miike is, as always, spot-on, regardless of how "tame" or "restrained" the film as a whole may seem. Beneath its warm and fuzzy family-friendly exterior beats the heart of a hard-hearted horror/fantasy picture helmed by a director who continues to amaze us with his ability to grow and evolve. Does the movie have problems? Sure it does. But even if you stop and stare at what Miike gets wrong, you can't help but get completely overwhelmed by the many things he gets right. It's a nice departure from his usual work, and, I hope, indicative of what's to come.