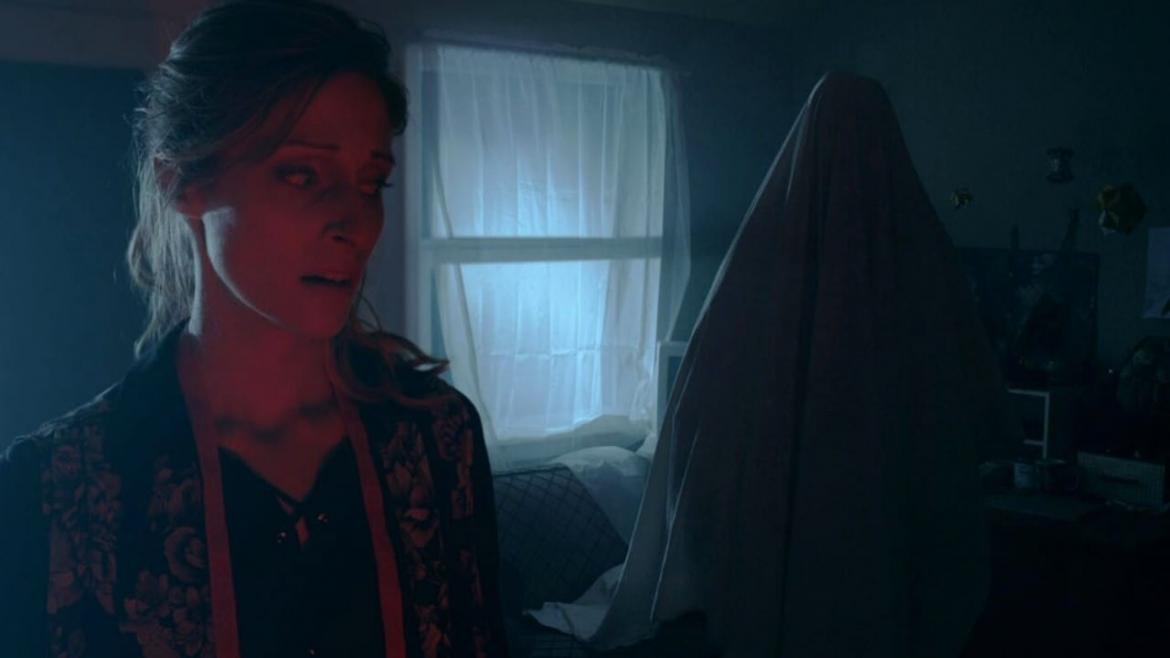 Say what you will about 2015's The Gallows. The film, like its 2019 sequel, has a kernel of a compelling idea. Unfortunately this misfire of a franchise is saddled to a mechanical bull programmed by a studio marketing department. The Gallows Act II is a factory produced and critically flawed jump scare machine being controlled by filmmakers with no sense of timing or restraint.

The central conceit of The Gallows and The Gallows Act II remains solid and intact. The films revolve around a cursed stage play originating in rural Nebraska where a teenager was tragically killed during the performance. Act II sets its sights on the digital age as an aspiring actress, Auna (Emma Horvath), leaves home to live with her sister and attend a school with a renowned theater program. Desperately seeking an audience on her YouTube channel Auna stumbles on the “Charlie Challenge” in which people read passages from the cursed play and try to endure the supernatural happenings that result. Her attempt not only bolsters her online following but her performance awes her peers and teacher. Simultaneously, Charlie's specter haunts Auna and her sister, driving Auna to the brink of insanity as she becomes desperate to stop the challenge. But Auna is pushed by a mysterious follower to continue the videos and complete "the perfect Charlie Challenge."

The Gallows Act II is tailor made for today's attention obsessed society, leveraging an arsenal of top trends. Every step of the way this feels like a film built from a studio checklist. The filmmakers often sabotage themselves with tired genre cliches and overused CGI jump scares. Every ounce of dread and subtle creepiness they manage to squeeze out of this is deflated by the hangman himself (Charlie) popping out of some hole in the ground and reaching at the screen. This happens so often it wouldn't be surprising if this was initially pitched years ago with 3-D conversion in mind.

In spite of the film’s derivative nature writer/director duo Travis Cluff and Chris Lofing surprisingly find a dramatic anchor to it all. Auna's arc has a certain meta dramatic weight to it that feels like Cluff and Lofing commenting on the journey of an aspiring creator trying to make their dreams come true. For most of the film this thread works to its advantage. By having even a modicum more ambition than its predecessor Act II is already trending upward as a superior sequel. Eventually though, the film settles with being nothing more than a formulaic teen scream flick with no redeeming or memorable qualities.

The Gallows Act II is a sequel that no one was asking for, and yet here we are. This remains a franchise with fading potential that, like Auna, is desperately chasing an audience and is willing to ditch its own creative integrity to find it. While the film just barely avoids tripping over the low bar set by the original, it never aspires to be more than the product of a night vision reaction marketing ploy. Horror audiences continue to evolve and become more invested in the nuances and challenges within genre. The Gallows Act II is a relic even within its modern setting destined to hang by its own noose in obscurity.

The Other Side of the Door