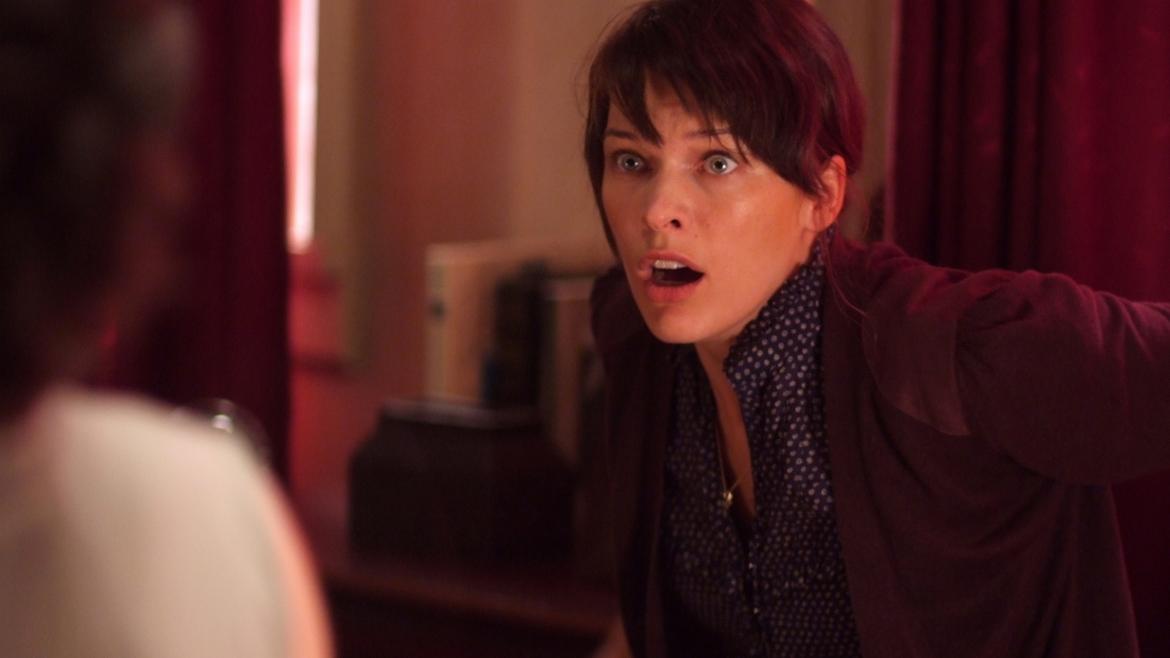 The Fourth Kind isn’t unique in its status as a horror movie purporting to be based on true events. What makes it stand out is the way it goes about making these claims. Writer/director Olatunde Osunsanmi wasn’t content to stick to poster taglines or title cards in the opening credits. Instead, Osunsanmi opens the film with lead actress Milla Jovovich breaking the fourth wall by introducing herself, the character she’ll be playing and the allegedly true plot of the movie to the audience. This seems intended to be jarring, but it plays as silly. It’s Milla Jovovich very seriously delivering the Dragnet opening speech (the story is true, the names have been changed to protect the innocent). Unfortunately, that “meant to be jarring, plays as silly” thing is true of much of The Fourth Kind.

The main plot follows Dr. Abigail Tyler, a psychiatrist who is researching sleep disorders in Nome, Alaska. She uses hypnosis to unlock patients’ memories, piecing together a widespread alien abduction narrative. As she uncovers more about what is going on, she inadvertently makes herself and her family targets. The Fourth Kind presents this plot in four ways: the fourth wall-busting bookend segments, a “dramatized” version of events, “archival” footage and via a sit down interview between the film’s director and the “real” Dr. Abigail Tyler.

To its credit, The Fourth Kind burns a ton of calories trying to convince audiences what they’re seeing is the truth. Many of the film’s most important sequences are show in split screen. One side of the screen will show Jovovich or some of the other actors in the dramatized version, while the other side of the screen shows the archival footage of what took place. Again, the effect is meant to lure viewers in by admitting, “Yeah this part is fake, but this other part … ” The problem is, it’s all fake. It’s just the same scene played out simultaneously, only with varying levels of glitziness.

It’s that archival footage that is really the film’s strongest weapon. These typically depict the hypnosis session between Dr. Tyler and one of her patients or Dr. Tyler being hypnotized by another doctor. These moments are responsible for nearly 100% of the film’s biggest scares. Without warning, the characters being hypnotized will start screaming, contorting their bodies in horrific ways that are tantalizingly mostly hidden as the video feed jumps and distorts. The movie’s interview segments, featuring Osunsanmi himself and the ghostly, hollow-eyed real Dr. Tyler are also a strength.

In addition to Dragnet, Osunsanmi also seems to have been a big 24 fan. There are a couple of times where he divides the screen, in true 24 style, into quadrants. When 24 did this, it was to catch audiences up on what was going on with the show’s disparate plotlines. The Fourth Kind doesn’t have a divergent narrative so, at one point, one of the quadrants is a close up of a tape recorder playing. By the time the images start alternating scrolling vertically and horizontally across the screen, it becomes obvious this is just style for style’s sake.

The Fourth Kind has a few big scares and clever ideas but it’s ultimately undone by distracting creative decisions by the filmmaker. Good on Osunsanmi for trying something different, but his movie is at its best when it sticks close to the traditional found footage model. Those moments are so effective that you can’t help but wonder if The Fourth Kind wouldn’t have been better served by just embracing the found footage concept outright, ditching the dramatizations and added gimmicks.