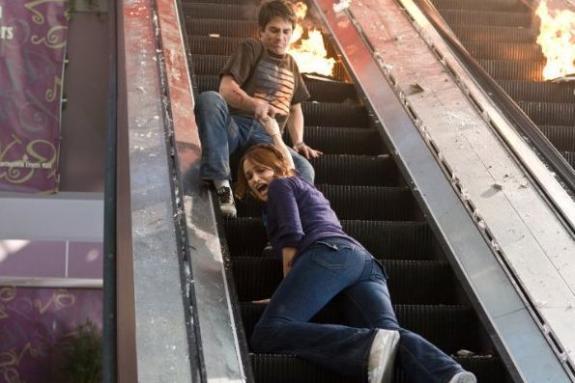 As the man responsible for delivering the best entry in the “Final Destination” franchise -- “Final Destination 2,” in case you were wondering -- you'd think David R. Ellis would have a thorough understanding of how these movies are supposed to unfold. His latest endeavor, the illogical, intelligence-insulting mess that is 2009's “The Final Destination,” is easily one of the absolute worst genre films of the year, and marks a new low for mainstream American horror. The picture takes everything that made the first two films a success and ignores them entirely, opting instead to spoon feed its built-in audience a bland, tasteless variation of previous accomplishments. What's left, I'm afraid, is an exercise in predictability and by-the-book terror. In 3D, no less.

Before moving forward, let me make something perfectly clear: I wasn’t looking for anything resembling a masterpiece when I decided to sit down with “The Final Destination.” I wasn't anticipating reinvention, mind-blowing originality, or even competent filmmaking. All I wanted was a little suspense, a few characters I could relate to, and a handful of surprising, unexpected kills. After all, it's the ridiculous gore and shocking deaths that drive the franchise, not impressive performances or deep, meaningful meditations on the fragility of human life. We want to see people die in a variety of sick and amusing ways, nothing more.

Unfortunately for anyone with a passing interest in this rapidly deteriorating series, Ellis has turned the picture's core concept into a horror version of the classic board game "Mouse Trap." Rather than basing the elaborate set pieces around a somewhat believable series of coincidental chain reactions, Death becomes a sort of metaphysical MacGyver -- if there isn't an immediate threat within the scheduled victim's vicinity, this ever-present spectral entity will use whatever is lying around to get the job done, regardless of how inconceivable it may seem. And while this trait has always been present within the franchise, it's never been quite as ridiculous and convoluted as it's presented here.

The picture opens at an ill-fated NASCAR race, an event which soon turns into fiery, blood-soaked pandemonium after a crash sends an abundance of burning debris into the unsuspecting crowd. However, thanks to a handy premonition by an all-America white guy with outstanding cheekbones, his friends, as well as a handful of random characters, are safe and sound before the accident takes place. Naturally, the survivors aren't free from danger for very long, as Death begins the collection process almost immediately, beginning with a racist tow truck driver's mouthy spouse. It's good to see that Hollywood doesn't stereotype.

Since we’ve seen this vapid formula in motion no less than three times before, there’s absolutely no suspense whatsoever buried anywhere in the picture. This is compounded greatly by the fact that Ellis makes absolutely no alterations to the storyline; every single death is impossibly predictable, and the filmmakers offer up little to no surprises to keep you interested. If this weren’t enough, every potentially cool set piece can be immediately spoiled by watching the trailer. If you’re still considering giving this film its day in court, shield your eyes from any previews you may encounter, as they’re seemingly designed to ruin what fun there is to be had.

In the increasingly popular tradition of modern genre offerings, “The Final Destination” comes packaged with the new millennium’s latest gimmick: 3D. Due to problems with my stereo vision, watching movies in this trendy medium is impossible, so I honestly cannot comment on its effectiveness. I will say, however, that the on-screen kills have been seriously dumbed down to accommodate the technology. Instead of delivering visceral, well-lensed splatter, Ellis subjects us to a bevy of flying objects and body parts, most of which come sailing from the center of the screen towards the camera. Some kills work better than others -- the swimming pool drain sequence is definitely a missed opportunity -- but none of them come close to achieving the madness of the first two movies. It’s a failure any way you slice it.

“The Final Destination’s” monstrously successful theatrical bow is a testament to how easily amused American horror audiences tend to be these days. Apparently the masses thoroughly enjoy predictably, and honestly don’t mind watching the same silliness over and over again. If that’s your thing, by all means, gorge yourself until you eyes pop out. Yours truly, on the other hand, would rather invest his limited entertainment funds into more creative fare. I'm almost positive certain individuals will swoon at the idea of watching a pair of bouncing breasts in 3D, and I'm sure the chain link fence and hair salon sequences will generate a few laughs, but none of it amounts to anything worthwhile. Depth, I'm afraid, is quickly losing ground to cheap cinematic gimmicks, and there's nothing I can do about it.