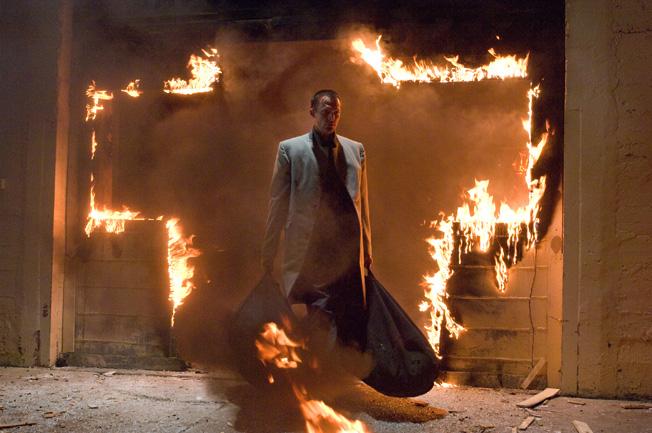 A film that combines many fast-paced, tense moments with some well-timed dialogue is generally referred to as an action film. A film with many interminable dialogue scenes punctuated by flurries of screaming, fighting or shooting is something else entirely. The filmmakers behind "Legion" did not understand this simple difference, and thus they have inflicted on the world a nearly unwatchable movie.

On its face, "Legion" appears to be a film based on the Christian Bible and its surrounding traditions. The archangel Michael (Paul Bettany), one of God's most trusted and beloved angels travels to Earth just as his master has decided to unleash an "extermination," one that Michael compares to the flood of Noah's time. Michael's goal on encountering terra firma is to seek out Charlie, a waitress at a small diner in the middle of the desert. Charlie carries humanity's only hope, a baby whose origins are not only left unexplained, but aren't even really ever discussed. God's army -- which effects its attack by taking over the bodies of everyday schmoes -- sets upon the diner in an attempt to kill this one baby.

In the early going, there are many a nod to Christian beliefs or values -- and often the lack thereof. Taken on their own, in some other narrative, these affectations might have added up to a generic and inconsequential religious film. But the easily digested platitudes are rolled out in the context of a film containing angels turned human, and humans that turn demonic when possessed by "God's servants." The Christian Bible has quite a healthy section on the apocalypse, replete with descriptions beyond even what many Hollywood screenwriters might imagine. Unlike the limitless films that have found success by mining this information, "Legion" chooses to go its own way with a plot that makes little sense. In doing so it's steps out into potentially fertile territory, but lacking the required creativity or filmmaking chops "Legion" neither ascends to lofty heights nor sinks to salacious (and enjoyable) lows.

While examined from 30,000 feet "Legion" might sound like something that could work -- archangel Michael must defend humanity's savior from God's wrath amidst an unnamed apocalypse. In the offing, however, the film disintegrates before the first act has even come to a close. There are too many questions and plot holes to even attempt to pull any single one apart. What's truly galling, and what makes "Legion" as unforgivable as a mortal sin, is the paucity of action. For a film that built its campaign around Paul Bettany's character, and the lengths that he would go to protect man, he's very rarely asked to reach those lengths. In the rare instances when he or some other character must act with force, the editing, lighting and camera work serve to undercut its potential.

To be clear, action and violence do not a great film make. Indeed, one of the finest films of 2009 -- Jason Reitman's "Up in the Air" -- features nary a moment that doesn't involve conversation or stillness. But "Legion" was not marketed or even conceived as a contemplative, talk-y film. It was pitched as something almost entirely the opposite, which makes the viewers disappointment and boredom all the more unforgivable.

"Legion" is the third straight theatrical release to feature the end of civilization. These films ask big questions and answer them in many different ways. "Daybreakers" plumbed the depths of despair and provides a beacon of hope splattered with blood and gore. "The Book of Eli" traveled a higher road, but one still littered with body parts mangled by Denzel Washington's machete. "Legion" offers us angels hovering somewhere in between. They shoot guns and swing maces, which might be exciting if this action were not buried neck deep in poor writing and boring cinematography. Genre fans will travel with filmmakers to idealistic heights, and we'll certainly walk in the murky, vile depths. But there is no greater folly than asking us to tread somewhere in between. "Legion" exists entirely in that purgatory, neither grimy enough to titillate nor smart enough to elevate.