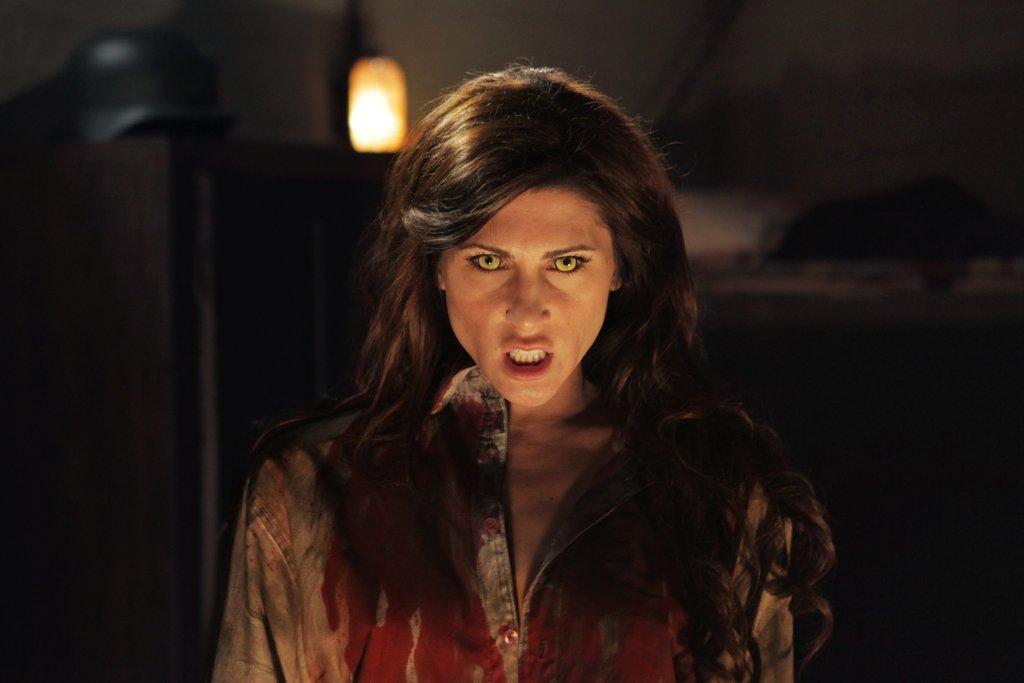 Before watching “The Devil’s Rock,” a 2011 horror film from New Zealand and now available in the United States, take a quick look at the film poster. A demon woman, decked out in a Nazi uniform, is splattered in blood and holding a knife. You see this poster and you think you’re probably going to get something like one of those Ilsa films from the seventies. Surely there can’t be a great movie hiding behind this awful poster, can there?

Okay, I won’t call “The Devil’s Rock” a great movie, but it’s not bad. Compared to other films that combine war and horror (e.g., “Blood Creek” or “Deathwatch”), “The Devil’s Rock” is actually one of the strongest. If you’re looking for a film with a solid story, good acting, Nazi occult mythology, and some great gore, you could do a lot worse.

“The Devil’s Rock” opens with two soldiers landing their tiny boat on a small island in the Channel Islands. It is the eve of D-Day and they are sent to destroy Nazi armaments and distract Hitler from where the real Allied invasion will be. Past the beach they find a large bunker (the imagery of the bunker is reminiscent of the castle in “The Keep,” another World War II horror film that’s nowhere near as good as “The Devil’s Rock”), and they hear people inside being tortured. Going against their orders they head in, and find Nazi soldiers slaughtered and eviscerated.

One Nazi, Colonel Klaus Meyeter (played by Matthew Sunderland, who gives a strong performance although he could have worked more on his German accent), is the only survivor in the bunker and says that his men have released a demon on the island. And it isn’t long before we see the demon itself. Played by Gina Varela, she is a seductress who shifts into these men’s lost loves and then tries to kill them. Much of the rest of “The Devil’s Rock” plays out with just these few characters--the soldiers trying to destroy the demon while she tries to free herself from the island.

Nothing I’ve mentioned so far sounds terribly original, I realize, but “The Devil’s Rock” carries this story with crisp pacing and dialogue. The film actually could have been a play, being so dialogue heavy and with few characters and scenes -- most of the film takes place within two rooms in the bunker.

Of course, all that talking also means it’s a slow burn, but director Paul Campion makes sure there are a few slaughtered bodies to keep interests up, as well as references to Occult ceremonies involving candles and blood. Campion’s film experience has primarily been with visual effects, and it shows. Despite the low budget, the film has some incredible visuals (check out the image of the Nazi soldier killed with a rifle stuffed down his throat).

“The Devil’s Rock” also has done its homework, and you have to respect how the film throws in little references to history -- from actual Allied attacks on the Channel Islands to various torture methods -- as well as Nazi occult plots from other films, including “Hellboy” and “Raiders of the Lost Ark”.

One criticism of “The Devil’s Rock” has to do with the score. Particularly at the beginning, the music is overbearing and unnecessary. Just when it really begins to grate, however, it seems to fade away. But it’s a small criticism, and shouldn’t keep you from enjoying this film.