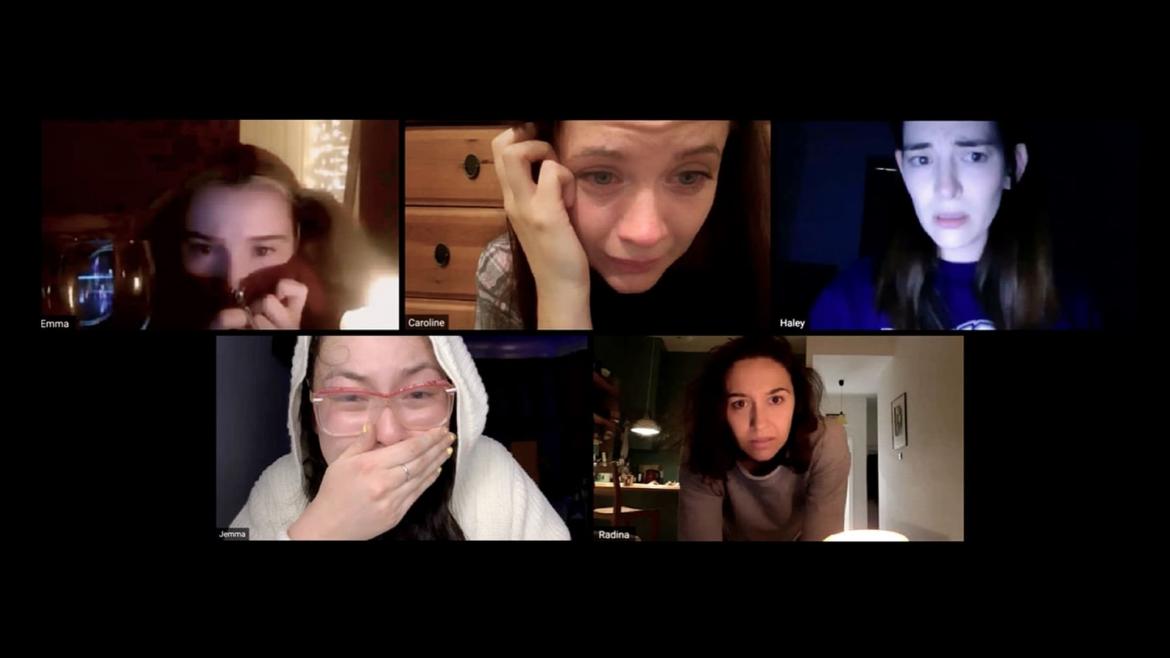 To say that 2020 has been an unprecedented shitshow would be an understatement. COVID-19 has had an immeasurable impact on people all over the world. Not long after lockdowns went into effect, people started talking about how the pandemic would show up in popular culture. If you’re anything like me, you may have started noticing every single instant in which characters shook hands, touched their faces, or spent time indoors with other humans. All of a sudden, all media immediately felt out of touch with what we were all experiencing.

Horror is a genre that has historically responded to the times and reflected our fears back at us. Living up to that legacy is Rob Savage’s new film Host. Released on Shudder earlier this summer, Host is presented to the audience completely from the perspective of a laptop screen. Shot entirely via Zoom during the lockdown in the UK, the movie is about six friends who decide to switch up their virtual hang by having a digital seance. When one of the friends decides not to take the process seriously (Team Haley), she invites something into the circle that doesn’t want to leave.

The setup parallels other recent releases such as Unfriended and Searching, but the germ for Host came from a short film that Savage produced earlier in the lockdown. After gathering his friends on Zoom, he told them about strange noises he’s been hearing in his attic. While they all stayed on the line, he went to investigate. The short went viral, and he approached Shudder about making a feature length film. Actors learned to do their own practical effects and shot all their sides on their computers. No one was allowed to see all of the script so that their reactions to the scares would be genuine.

Upon its release, Host  received near universal positive responses from audiences and critics. The movie has a score of 100 on Rotten Tomatoes and was a critical darling. The experience of watching it is not unlike hanging out with friends on a Zoom call, which we’re all doing a lot of these days. The actors have great chemistry and banter comfortably with each other, even over garbly internet. The movie’s short runtime, mimicking the length of a free Zoom call, offers a unique constraint the filmmakers leverage to achieve an incredibly effective pacing. Though we see most of the action from a computer, the kills are punchy and the practical effects are stupendous considering they were largely carried out by actors with only basic training.

In a year that has been characterized by people finding inventive ways to connect and do the things that we miss doing, Host stands as a really ingenious piece of filmmaking. After months of seeing titles we were excited about getting bumped and bumped and bumed, it was nice to have Host fall into our laps. Maybe we can have nice things!