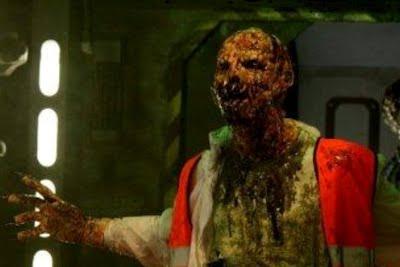 Confession time: I saw the “DOOM” movie on opening night. Actually, that’s not the whole story. I saw the “DOOM” movie on opening night with a bunch of guys in costume (I swear I wasn’t one of them). There I was, a kid that grew up killing Hell Knights on my computer while listening to “Reign in Blood”, sitting next to a guy dressed up like a Cyber-Demon, an Imp, an Arch-Vile and another confused friend who had no idea that there were going to be costumes (I said I didn’t know about it... I lied). I wasn’t really expecting much from that movie, but I was expecting to at least be entertained. Instead, I left that theater bored and disappointed (and pretty embarrassed, but that has nothing to do with the movie and everything to do with the guy in a viking helmet and a muscle suit next to me). I mean, come on, it’s “DOOM”, it writes itself. Demons + Mars + Guns = Brainless, Fun Movie. Instead, we got a shitty vehicle for The Rock that ended with a fist fight. “The Dark Lurking” promised to be everything that “DOOM” wasn’t. There’s demons, a space station, lots of guns and no former professional wrestlers. The question is, can it do what “DOOM” didn’t? Short answer: no.

I know I can’t judge a film by it’s cover. I mean, last week I reviewed a movie that I was convinced was about a giant space slug wrecking Tokyo and instead got an intelligent reflection on childhood and the mundanity of adult life. However, when I saw the tagline “In Space, Terror Knows No Bounds” on this DVD cover below an obvious knock-off of the alien from “Alien”, I groaned and died inside a little. This is not an original film by any stretch of the imagination. We start with a young woman waking up on a space station by herself. Think Ripley from “Alien” but with an Australian accent. Quickly, everything goes to hell and there’s shooting, monsters and people dying left and right much like in “DOOM”. Eventually, she finds safety with a group of survivors, who can’t get along and are plagued by in-fighting and trust issues, much like every zombie film ever. Finally, it becomes apparent that the creatures attacking the ship aren’t natural in origin and are actually demonic entities from Hell just like in “Event Horizon”. There is not a single original idea in this film.

The acting and dialogue here is some of the worst I’ve encountered. The acting in this film is reminiscent of the bad dubbing you’d find in an terrible anime or kung-fu film (not that I’d know anything about that... *cough*). It’s low-budget, so amateur acting is expected, but this is particularly bad. “Star Wars Prequel Trilogy” bad. The dialogue’s not much better. Nothing sounds organic or like something an actual person would say. The attempts at humor come from especially bad sarcasm (an emotion that really needs good acting to pull off) and fall super flat. The one-liners are way too long and sound forced. Not only is the acting here amateur, so is the screen-writing.

It wouldn’t be so bad if this film was non-stop action. And there are periods of time when it is. Honestly, during those portions this film isn’t bad. The practical effects in this film are really good, especially for the budget. There’s very little to no CGI in this film and the monster makeup is very good. The zombies look pulpy and putrid. The demons are crusty and menacing looking. Given the low budgets, I’m amazed at the things they were able to pull off. The action is fast paced, filmed solidly (though not perfectly) and entertaining. When it’s moving quickly, this is an entertaining little flick.

However, the film does slow down and expand upon the plot. And when it does, the entire thing falls apart. The characters here are so one-dimensional, they invoke no reaction from the viewer. And when you don’t care about the characters, how are you supposed to care about anything that’s happening on screen? The plot is so derivative and obvious that it doesn’t really even need that much expanding upon because everyone can see where it’s going. And the painful acting and dialogue make it a chore to sit through these parts.

As it stands, “The Dark Lurking” is obviously a labor of love. Outside of the acting and script problems, this doesn’t feel like a low-budget film. The effects are professional and impressive. However, the writing and acting just aren’t up to snuff. And unfortunately, whenever there’s not any action, this film crawls to a supremely slow and boring halt. However, if I was making my own low-budget film, I would absolutely hire these guys to do the special effects. I’d just keep them away from the writing and directing parts.