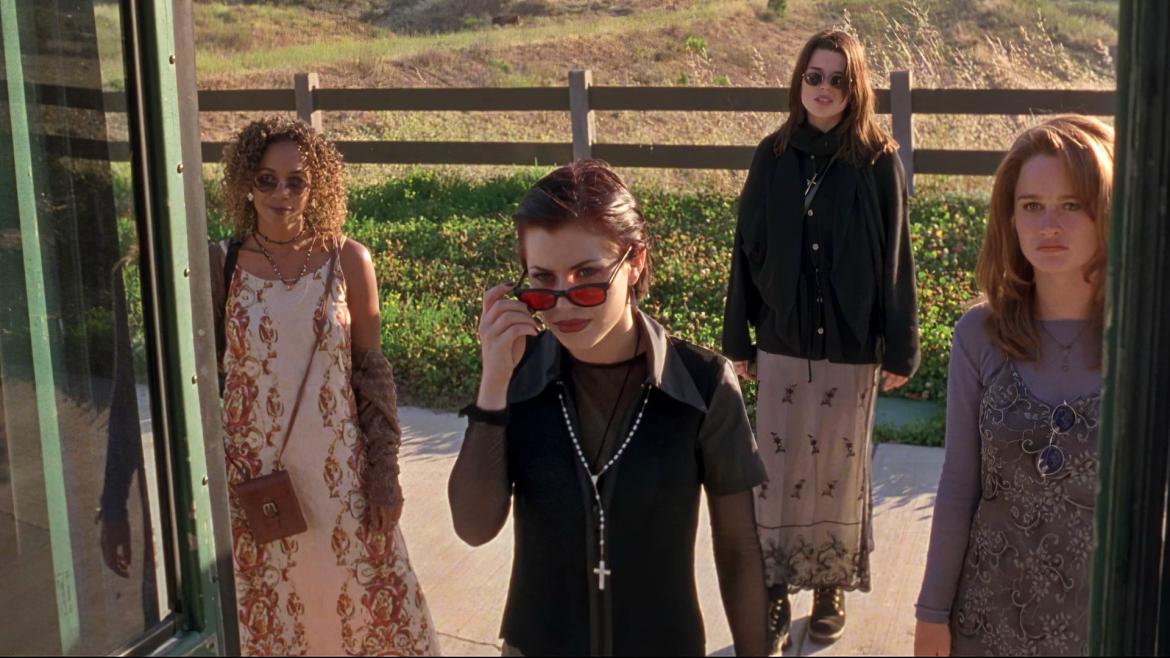 When it was released in the spring of 1996, the world was not ready for The Craft. At the film's core is the story of four high school girls who come together out of a desire to not feel so powerless. The film’s director, Andrew Fleming, shares in the DVD commentary that it was their intention to create a PG-13 film, but when it came time to release the movie, it received an R rating, because it centered around witchcraft. It would be less than a year before Buffy Summers (as portrayed by Sarah Michelle Gellar) would saunter onto our television screens, airing squarely in a primetime slot and being coupled with shows like Dawson’s Creek. So what was the difference?

The Craft follows a highschool-aged girl named Sarah (Robin Tunney) whose family moves to Los Angeles in search of a new start. Sarah’s mother died in childbirth and her relationship with her father and his girlfriend is strained from the start. When we learn that Sarah had attempted to take her life before their move, we begin to grasp the fullness of her desire for a sense of belonging. She is quickly taken in by a close-knit trio of her peers; Nancy (Firuza Balk), Bonne (Neve Campbell), and Rochelle (Rachel True). Each of the three is searching for something herself, and they have been desperately trying to start their own coven to affect change against forces that feel beyond their control. With the addition of Sarah – their fourth – the girls find the power that they have been looking for. Rochelle seeks revenge against a popular girl who has made her life miserable and harassed her with racial slurs while teachers and coaches largely ignore it. Bonnie heals the burn scars that cover much of her back and upper arms and have made her feel ugly and ignored. Nancy is able to pull herself and her mother out of poverty and out from under the thumb of an abusive man.

More powerful, though not as plainly stated in the film, is the close bond that is created between the girls. In a famous scene where the girls play a game of Light as a Feather, Stiff as a Board, their power and trust in one another enable them to lift Rochelle off the floor - holding her suspended and safe. Though there may be criticisms to be made about the apparent shallowness about some of their wishes (Bonnie’s appearance, Nancy’s wealth) it is clear that what is really at stake here is these women being allowed to have agency in their lives and to be authors of their own stories. Bonnie relishes her newfound confidence and Nancy seems far more grateful to have her mother back than to have the fancy new apartment and the trappings therein.

It is here that we see the potential divide between The Craft and shows like Buffy or Charmed (which premiered in 1998). In those shows, young women were born possessing a power “for good” which they used to fight demons and evil. Their foes were often easy to identify and differentiate from ourselves by their prosthetics and fangs. In The Craft, however, the targets of the girls’ power much more often look like “us.” They are privileged, wealthy, white teens (for the most part). This is a movie about young women taking power back from a system that is stacked against them, using power that – especially in the wake of the Satanic Panic of the 80’s and 90’s – felt all too real to a broad swath of people. Society has always been wary of women who wield power, especially if that power is understood to be power that they “take.”  (Hell, in the early seasons of Buffy, her power and her activities are monitored by a Watchers’ Council; a group of stuffy old British men who see her as their “tool” to fight the forces of darkness).

The Craft is a movie that means a lot to a lot of people, especially women of a certain age who saw this movie as they were coming into their own. It is not, however, a perfect movie. Aspects of the film are less well crafted, and I’m not only talking about the very 90’s effects, which I find quite charming. Perhaps the most egregious example is Sarah’s storyline as it relates to Chris (Skeet Ulrich). On Sarah’s first day at her new school, Chris asks her out. They spend some time together, but when he asks her to come home with him, she politely declines, only to arrive at school the next day to be inundated with rumors that she and Chris slept together and that she was a “lousy lay.” Sarah uses her power to make Chris like her, and at first she uses this to cut him down a little, but the fact that she wants a boy like this to like her is troubling. Later, when they go on another date, he tries to force himself on her and she is forced to run away from him. Chris may have been under the influence of a spell at that time, but he demonstrated a lack of basic respect before that was a case. When Chris dies later, Sarah is heartbroken, and says to her dad that she thinks “He was a good guy underneath it all.” What?! I’m not saying that Chris deserved to die, but I think we can all agree that he at no point proved himself to be a “good guy.”

Despite this plot ickiness, the value of The Craft cannot be overstated. It is a movie starring four young women who all look different, and not a single blonde in the mix! These three women are beautiful and powerful and they care deeply for one another (until they don’t). And this movie certainly helped to pave the way for other other properties, like the aforementioned Charmed, that stole (?) its very theme song from this movie. The Craft is currently being remade or rebooted and I’m cautiously optimistic to see what we’ll get!