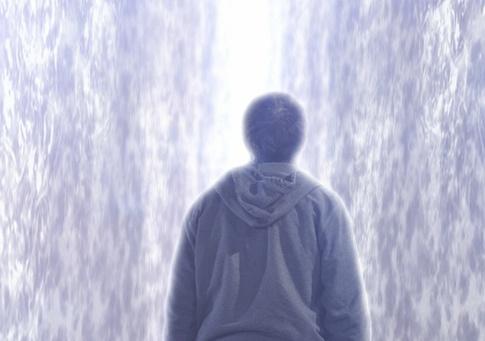 "The future didn't want me..." It's a strong phrase uttered by one of the tragic characters at the heart of the story in "The Corridor". It's also, arguably, a sentiment that a good number of males in their late 20's can relate to these days. Our parents were long since settled by this time in their lives, with children, a career and a home with a mortgage. In 2012 however, that's not always the case. Many of us spend an entire decade in our 20's trying to "find ourselves", aimlessly searching for something we can't quite define. It's this journey, as well as the meaning of masculinity in the modern age, that are at the core of "The Corridor".

The film starts tragically, with a character named Tyler hiding in a closet, peering through the door looking at the lifeless body of his mother. When his friends arrive and try to help, he's muttering what seems like nonsense. The situation devolves quickly and ends when he stabs two of his friends with a knife he's holding.

Flash forward an indeterminate amount of time and we see the friends gathering again to take a trip out to a cabin in the woods, one that clearly has sentimental value from their youths. The group, including an "egg-head", a jock, a wild-child and one middle of the road type of guy, is attempting to mend their friendship with Tyler, as well as have a send-off for his mother, who we learn committed suicide by overdose.

Tyler is skiddish, and so are his friends being around him. It's not an easy thing to forgive a friend for violently attacking you, and for the first 45 minutes or so we watch them as they work out these and a myriad of other issues. The dialog is harsh and authentic, ringing true to a certain Western male bonding experience. Each of them feels lost in his own way, and despite the fact that they want to be there for each other, they can't help but tear each other down in a feeble attempt at making themselves feel better.

It's a classic case of a tribe eating their own out of desperation. This, combined with the aforementioned allusions to modern masculinity (or lack thereof), are the driving forces behind much of the film. It's only when they discover a translucent "corridor" in the woods that things start to get a little... well let's just say "weird".

What follows is a surreal journey into the unknown, as the "corridor", sort of like a semi-invisible forcefield, slowly takes control of the group's minds and eventually causes them to turn on each other, to violent ends. Along the way, we slowly begin to uncover bits of truth about Tyler's mother's death, until all is revealed in the film's final moments. What it's all alluding to, and what symbolism the film's deliberate imagery is trying to evoke are questions I was unable to answer for myself. The film doesn't seem all that concerned with letting you in on its secrets.

I connected with the core story in "The corridor" on an emotional level I was not expecting. After all, I fit square into the demographic they're deconstructing, so a lot of the themes hit close to home. Because of this, I'm willing to give the muddled conclusion a pass. Even without a satisfying ending, "The Corridor" is a beautifully surreal journey into the soul of these characters... and despite the frustration caused by the ambiguous nature of the story, it's a journey I plan to take again.